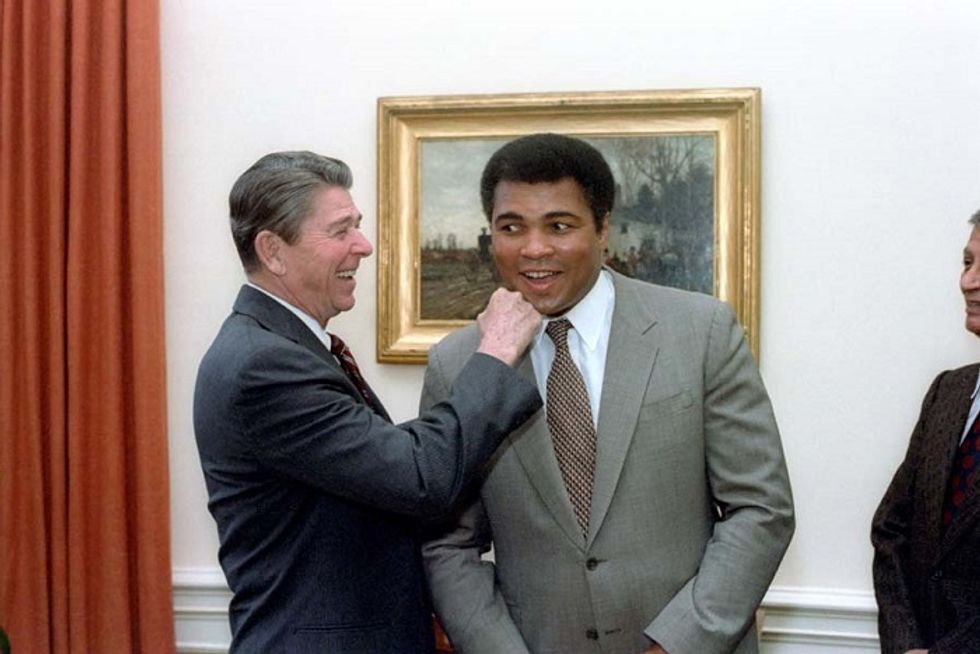 Donald Trump is bad at America, two out of three Americans agree, and the third American not only is an actual Nazi, but also doesn't think sugar, or meth, causes tooth decay. And so you get the sight of a lot of genuinely distressed Republicans, like this pretty Fox woman who can't believe she's being called a liberal now just because she doesn't approve of Nazi-murder, and "stunned" administration officials who didn't think he'd say his private beliefs out loud.

Among the now familiar WTFs is this load of hot take: Why can't Donald Trump be a good American, and hate racism, like Ronald Reagan did? Splain us, Huffington Post!

Former President Ronald Reagan spoke to the NAACP’s annual convention in 1981 when he was commander in chief, and his comments stand in sharp contrast to Trump’s tepid response to racist violence.

“A few isolated groups in the backwater of American life still hold perverted notions of what America is all about,” he said in a clip going viral. “Recently in some places in the nation there’s been a disturbing reoccurrence of bigotry and violence.”

Then, Reagan sent a direct message to those “who still adhere to senseless racism and religious prejudice.”

“My administration will vigorously investigate and prosecute those who, by violence or intimidation, would attempt to deny Americans their constitutional rights,” he promised.

Well, if you're looking for "what's the very least Trump should have said out loud in polite society," that would be correct. And it was also the very least Ronald Reagan could have said, because St. Reagan, whose administration never became him like his leaving of it, was actually kind of a HUGE RACIST, who created the dogwhistles we're still hearing today. To wit!

Ronald Reagan kicked off his 1980 presidential campaign in Philadelphia, Mississippi, the town where the three civil rights organizers were murdered for registering black people to vote. His speech was about "states' rights," which is not very secret code for "states' rights to own black people." (Just ask those libtards at the libtarded "Library of Congress.") Here, listen to this Mississippi history guy:

On July 31st, just days before Reagan went to Neshoba County, the New York Times reported that the Ku Klux Klan had endorsed Reagan. In its newspaper, the Klan said that the Republican platform “reads as if it were written by a Klansman.” Reagan rejected the endorsement, but only after a Carter cabinet official brought it up in a campaign speech. The dubious connection did not stop Reagan from using segregationist language in Neshoba County.

It was clear from other episodes in that campaign that Reagan was content to let southern Republicans link him to segregationist politics in the South’s recent past. Reagan’s states rights line was prepared beforehand and reporters covering the event could not recall him using the term before the Neshoba County appearance. John Bell Williams, an arch-segregationist former governor who had crossed party lines in 1964 to endorse Barry Goldwater, joined Reagan on stage at another campaign stop in Mississippi. Reagan’s campaign chair in the state, Trent Lott, praised Strom Thurmond, the former segregationist Dixiecrat candidate in 1948, at a Reagan rally, saying that if Thurmond had been elected president “we wouldn’t be in the mess we are today.”

And Trent Lott was thrown out of the Republican party for good and never became Senate Majority Leader, and then didn't say it AGAIN in 2002 and actually have to step down, while Republicans wept real tears for how unfair it was that he was driven from party leadership just for pining for the good old days of Jim Crow.

Ronald Reagan never shut up about "young bucks buying T-bones with food stamps" and "welfare queens driving Cadillacs." He meant black young bucks and black welfare queens. It was a whole thing with him! He said it a lot! He was like the Paul Le Page of his day!

The Moral Majority Is Neither

When Bob Jones University was going to have to pay taxes instead of getting all its lovely money tax free, because it was the 1980s and still banned interracial dating, Ronald Reagan came to its rescue! Then everybody was like "wow, that is pretty racist even for 1982," and he was like oh, did I do that???

As support for the holiday gained momentum in 1981 and 1982, Reagan vehemently opposed the idea, arguing that such a tribute would cost the federal government too much money (an estimated $18 million per year) and that “we could have an awful lot of holidays if we start down that road.” On October 19, 1983, Reagan attended his bimonthly President’s News Conference in the East Room of the White House. Shortly after he took to the podium he fielded a question on King. “Mr. President,” a reporter asked, “Senator Helms has been saying on the Senate floor that Martin Luther King, Jr., had communist associations, was a communist sympathizer. Do you agree?” With no discernable pause Reagan responded, “We’ll know in about thirty-five years, won’t we?”, referring to when King’s FBI file would be unsealed.

Then everybody was like "you are sounding pretty racist AGAIN, even for 1983" and he was like oh, never mind.

Emily Litella is never not funny.

How About Opposing the Civil Rights Act, the Voting Rights Act, and Having to Rent to Black Guys (Just Like Trump!)

He opposed the Civil Rights Act in 1964, calling it “a bad piece of legislation.” A year later he came out against the Voting Rights Act, which he deemed “humiliating to the South.” During his 1966 California gubernatorial campaign, he defended the Golden State’s Proposition 14, which passed in 1964 and nullified the state’s fair housing law, effectively reinstating the right to discriminate in home sales and leases. “If an individual wants to discriminate against Negroes or others in selling or renting his house,” Reagan insisted, “it is his right to do so.” A Reagan campaign ad that same year referred to black neighborhoods as “jungles.”

Oh jeez, we didn't even know that part until we read further in that Boston Review piece about MLK Day. Fucking YIKES.

Basically, Donald Trump and Ronald Reagan are racist twinsies. It's just that Ronald Reagan knew how to actually pivot, when people got mad at him for saying the quiet parts out loud.

Support Your Wonkette! Sign up for a monthly donation today so we can keep you up to date on all the breaking news from 1983!