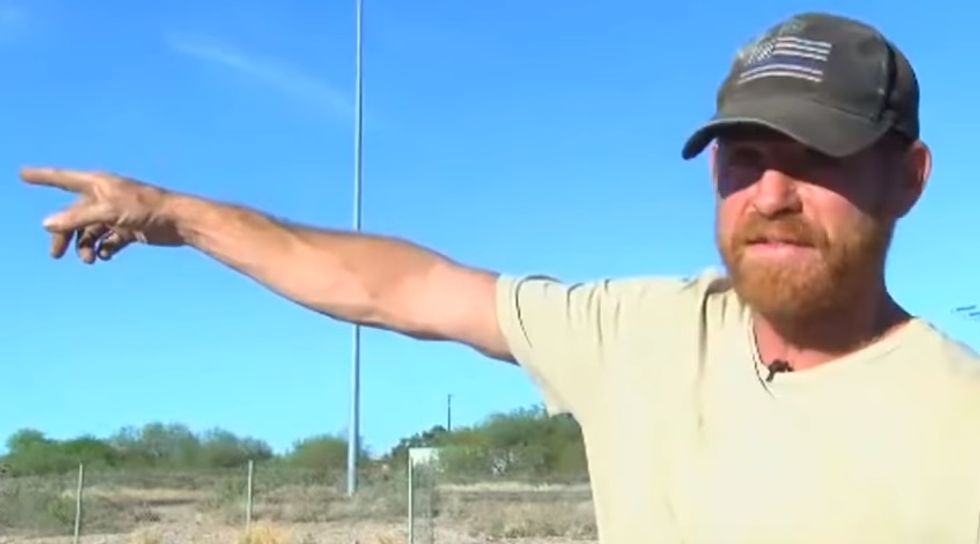 George Soros is obviously doing things to naked Barbie dolls in the desert.

The craziest parts of the internet are abuzz with a brand new, completely nutso conspiracy theory based on completely evidence-free conjecture and Occam's Duct Tape, that perversion of logic that takes a crazy premise and then slaps on everything in sight as proof of the unlikely claim. You see, some brave freedom fighters with "Veterans on Patrol," a group led by a dude who has of course never been in any branch of the military, was looking through the desert near Tucson, Arizona, when they found an abandoned homeless camp. Yr Dok Zoom used to live in Tucson, and we too would find these sad remnants of somebody's temporary shelter all the damn time -- homeless encampments and illegal dumps are sadly just part of the what they call the urban-desert interface. Ah, but this camp was special! It had stuff in it -- stuff that, if you get really imaginative, simply HAS to be evidence of a "child sex trafficking camp." Take one bunch of famewhore militia guys who know the conspiracysphere will lap up damn near anything, add some local media outlets who are happy to avoid critical thinking, and idiots like Gateway Pundit, Laura Loomer, Mike Cernovich, and InfoWars have a ready-made "Could This Be A Child Sex Trafficking Camp???" story, since isn't that how all great truths are uncovered?

Here's one credulous report from KOLD-TV

The never-served-even-once leader of the group, Lewis Arthur (pictured up top), sounded the alarm:

Pretty strong analysis! Reporter Kevin Adger, who presumably went to J-school and then got paid for this, also toured the site with a guy who knows all about sex trafficking because he used to be a Navy SEAL, and he offered his chilling insights:

"I didn't expect to see something this heinous and inhumane this close," [Craig] Sawyer said. "I served in the military to keep things like this from happening here; that's why I risked my security, so nobody here would have to put up with this."

Definitely sex trafficking, because how else could you explain things like Playboy magazines, chairs, a playpen full of trash, and a dugout, it's roof covered with trash, with one cubbyhole the genius investigators decided could only be used to lock away trafficked trafficked children? (IRRELEVANT that the entry didn't actually have a door or lock.) Why on earth would "homeless people" have an underground, roofed dugout in the Arizona desert where temperatures regularly exceed 110 in the summer? It's simply inexplicable!

KVOA-TV, the Tucson NBC affiliate, somehow managed to be even more bereft of skepticism, because after all, why would a veterans group lie?

As Will Sommer notes in his Right Richter newsletter, the conspirasphere has been going nuts over what they insist are "restraints" tied to the branches of what they've decided is a "Rape Tree," because how else could you explain this, huh?

It simply has to be a restraint, just like auto tie-downs in railroad carshad to be "shackles" for Jade Helm 15. Or maybe, as KVOA noted in a slightly less panicky video, the straps had even more sinister purposes: holding the salvaged bits of wood and building supplies together:

Oh, but there was plenty more random shit to tape together into a vast conspiracy! The homeless camp was near a decommissioned cement plant, and that plant was owned by the Mexican cement company CEMEX, which (cue scary music) once gave money to the Clinton Foundation, as the Gateway Pundit excitedly reported. See! It all comes together! And Cemex was one of many contractors that did reconstruction work in Haiti, where the Clinton Global Initiative ALSO did stuff -- BAD stuff! We saw it on the internet!!!!

Needless to say, when the Tucson Police investigated the homeless camp and said it was a homeless camp, the Wingnuttosphere knew the conspiracy was proven, since of course the police always deny any knowledge of George Soros's international child-sex ring. Because what about the rape tree that had to be for rape? Why would it be called that, otherwise, HUH? And how about THIS shocking evidence: A naked Barbie doll, no doubt put in the camp by Bill Clinton himself?

Or this playpen full of crap, with an obvious clue to sex trafficking: a can of "big sexy hair" hairspray!!!!!

Writer JJ MacNab, who covers militia craziness while somehow staying sane, has an excellent Twitter thread on all the Southern Arizona stupid; militia leader and not-a-veteran Lewis Arthur at one point climbed up in a tower at the disused cement plant and said he wouldn't come down until the entire area was searched with cadaver dogs, but he came down in the evening anyway. MacNab notes that climbing towers is kind of Arthur's thing:

This is the third time this guy has climbed a tower looking for attention. He did it in 2015: https://t.co/LNLcJpS2PN

Will Sommer notes the saddest thing about the entire stupid affair (which may still develop further depending what wingnuts make of it):

Watching the myriad videos shot at the camp, it's hard not to feel like the various figures who visited it are ignoring the much more likely tragedy.

The evidence points to a crib and dolls being at the homeless encampment not because it was a site for child sex trafficking, but because there were homeless children there.

But, unlike the idea of police covering up a Clinton sex trafficking ring, that's not the kind of story that goes viral.

While you may THINK Sommer has a point, as everyone knows, the only reason anyone is homeless is because the Clintons have caused wars around the world to decimate the planet and usher in human-cyborg hybrids, the manufacture of which requires lots of hair product.

We do it for you. Click for money, if you please.