Why Do All These Jews Keep 'Crucifying' All These Nazis, With Mean Jew Words? 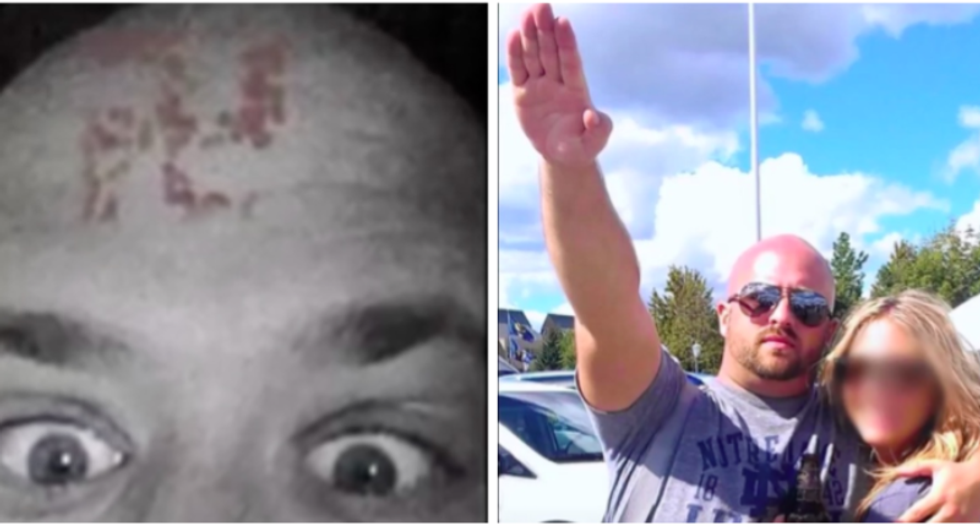 Aaron VanArsdale, a bar owner in Kalamazoo, Michigan, is deeply upset over the fact that people think he is a Nazi. Why do they think he is a Nazi? Because of some pictures on his Facebook of him heiling Hitler, and of a Swastika on his head, and of a Jewish Star of David dripping in blood.

Since the photos were discovered, calls have been pouring in with people saying they're going to boycott his business, bands have announced they will no longer play there, and vandals have spray painted "Get Out" and “Fuck you, Nazi scum” on the side of the bar.

"The public is crucifying me," he told reporters at WWMT. Which is an interesting choice of words, wouldn't you say? Weird how all these people getting in trouble for anti-Semitic shit keep referring to themselves as being crucified. Yes, he is the second nazi today to whine about it. The first one said this ...

I have had no trial, no process of any kind, I have only been crucified by Jewish media and financial outlets for daring to suggest white people have a right to exist, to have a history, to have a culture, and to have a nation.

... because he might actually have to go to jail for beating the shit out of people. SAD.

VanArsdale insists that he's not a White Supremacist, and that all the pictures were just his attempt at JOKES.

"You see how that's confusing when there's a photo of the Star of David with blood on it with a swastika?" Newschannel 3 asked.

VanArsdale replied, "Bad judgment, attempt at humor that didn't turn out so well. You know, I'm not trying to make excuses that's what it was. I don't stand for that, I'm not pro-hate groups. I'm not in any extreme groups."

How is that a joke? What is the punchline there, VanArsdale?

Allow me to note that the pictures have been up for years. So clearly it did not occur to him that this was "bad judgment" or a bad "attempt at humor" until people called him out on it.

Over the past few years, there has been this idea in certain right-wing circles that one can be "ironically racist" and "ironically anti-Semitic" without actually being either of those things. That they are simply fun ways to "trigger" liberals, push boundaries and be very cool and edgy. Like the hippies, even! Except with swastikas.

Milo Yiannopoulis stated this explicitly in his guide to the alt-right:

Just as the kids of the 60s shocked their parents with promiscuity, long hair and rock’n’roll, so too do the alt-right’s young meme brigades shock older generations with outrageous caricatures, from the Jewish “Shlomo Shekelburg” to “Remove Kebab,” an internet in-joke about the Bosnian genocide. These caricatures are often spliced together with Millennial pop culture references, from old 4chan memes like pepe the frog, to anime and My Little Pony references.

Are they actually bigots? No more than death metal devotees in the 80s were actually Satanists. For them, it’s simply a means to fluster their grandparents. Currently, the Grandfather-in-Chief is Republican consultant Rick Wilson, who attracted the attention of this group on Twitter after attacking them as “childless single men who jerk off to anime.”

He then proceeded to explain their true motivations were "not racism, the restoration of monarchy or traditional gender roles, but lulz."

Oh, cool. LULZ. And they wonder why we don't let conservatives do comedy!

The first problem with this, as Aaron VanArsdale learned, is that existence precedes essence. It literally does not matter if someone is a bigot in their heart. In fact, it does not matter what anyone is, in their heart. Guess why? Because there literally is no difference in impact between a picture of a "sincere" Nazi doing a Nazi salute and a picture of an "ironic" Nazi doing a Nazi salute. None at all! Given the fact that no one has psychic powers to see into your heart, it is best to do everything in one's power to not appear to be a Nazi. Which, amazingly enough, is not actually that difficult.

There is no such thing as "ironic racism" or "ironic anti-Semitism." There isn't. Because you can't actually do that shit without thinking that you are better than other people. Without thinking that the horror these images strike in the heart of Jewish people and people of color matters less than your right to have a grand old time saluting Hitler and drawing swastikas on your forehead.

There's also another, even more disturbing, aspect to this shit. The primary goal of the "sincere" Nazis is to move the Overton window to the Right, thus making their views more mainstream. This is part of why they worship Donald Trump. But, by pushing this idea that you can be whimsically racist or anti-Semitic "for the lulz" and that it's all in good fun, they are hoping to inure people to their views. To get people to stop thinking of them as such a big deal. This is something they discuss constantly on their message boards.

Once they get people on board with "ironic racism," the goal is to then "red pill" them with the real stuff -- being OK with saying it or hearing it makes it a lot easier to believe. They also wish to make it unclear what is "ironic racism" and what is "real racism" so as to eliminate social consequences for either of those things. Because hey! The person could just be kidding!

So even if Aaron VanArsdale is not a "sincere" Nazi, he is aiding Nazis in normalizing their bullshit. There's no such thing as an "innocent" Hitler salute.

And nobody "crucified" you by announcing they weren't gonna play your shitty bar.