Why Does No One Like Donald Trump's Great Idea For Russia To Do Espionage To Hillary Clinton? 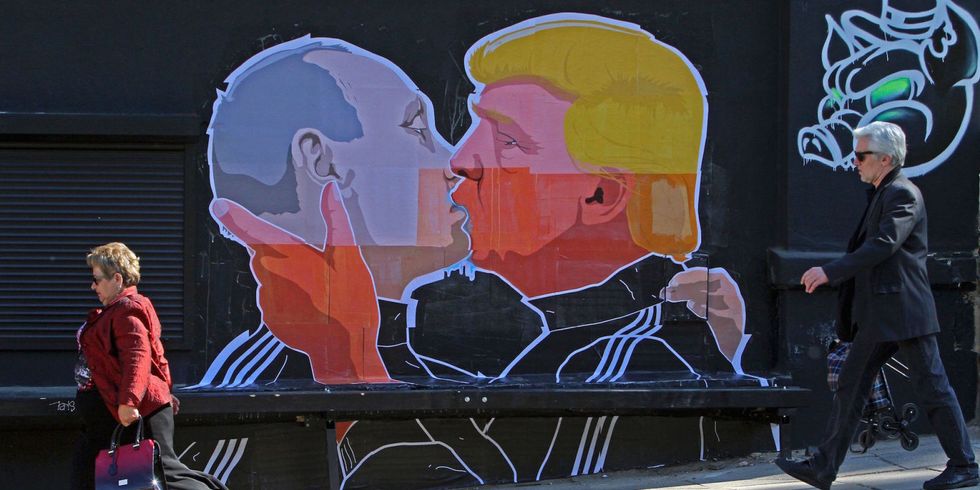 In light of suspicions that Donald Trump is not releasing his tax returns due to some possible kooky financial ties to Russian oligarchs, he is now saying he has no ties at all to Russia or Vladmir Putin. He is also saying that he's never even met Putin, despite the fact that he once bragged in a debate that he had met Putin when they were both on 60 Minutes and liked him a lot. Not that he doesn't want to be BFFs with Putin and dismantle NATO and go on long, shirtless horsey rides in the forest together, because he still sure wants to do that! He also would like to ask them a few favors, in anticipation of their soon to be BFFdom!

Namely, he would like the country to get its hackers to hack Hillary Clinton's email, so that he can read them and prove that she did Benghazi on purpose or something, because she hates America.

“Russia, if you’re listening, I hope you’re able to find the 30,000 emails that are missing. I think you will probably be rewarded mightily by our press.”

Oh cool! Yeah! It is definitely not weird for someone running for president to ask another country to do espionage on America! That is totally a super idea! That is why, when asked if Vladmir Putin should get involved in this election, Trump confidently stated “I’m not going to tell Putin what to do. Why should I tell Putin what to do?”

Another good part of this is where Trump explains that Putin can respect him, unlike woman-person Hillary Clinton, or black-person President Obama! Why? Because Putin called President Obama the n-word, which means that he hasn't done enough to earn his respect. "Oh gee!" President Obama is probably asking himself right now, "What could I have done to endear myself to a crazy Russian dictator who throws people in jail for being gay and also slings racial slurs at me? Should I have sent him an Edible Arrangement? Maybe some of those nice Harry and David pears?"

To be fair, Trump has won high praise from both Putin, who calls him a genius, and the state-run media of North Korea! Which more makes up for the fact that all the leaders of countries that are our actual allies are horrified by him. Yeah, we can just make new friends when he is president. Better friends, who will hack emails for us! Because really, what you want out of a President is to alienate all the normal countries and get in cahoots with dictators instead. Who are definitely not endorsing you for totally nefarious reasons, like the fact that having a really shitty United States President who wants to do away with having allies might be sort of convenient for them!

This is, unsurprisingly, not the first time Trump has asked for help from hackers! During his birther days, he repeatedly asked them to get him President Obama's records, so he could prove that he was born in Kenya, even though he wasn't.

Imagine if things had always been this way though, and instead of going and fighting Hitler, Roosevelt attended a painting workshop with him instead! Then, he could have like, just told him to stop killing all the Jewish people, and Hitler would have been like "OH, I see you are an alpha male! I respect you! Sure, I will stop killing all the Jewish people! No prob! Also are there any favors I can do for you while I am at it?" And then Trumproosevelt would be like "Yes, I would like a fleet of your fanciest Volvos. Then you and I can get together and make fun of Churchill's weight issues! Have you noticed that he is fat? Because he is totally fat, omg." and Hitler would be like "Sounds good to me!"

Alas, former CIA Director Leon Panetta somehow thinks that these sort of sentiments suggest that Donald Trump is not particularly loyal to the United States.

ODDLY, even those in his own party seem less excited about this plan! A spokesman for Speaker Paul Ryan told Buzzfeed that “Russia is a global menace led by a devious thug. Putin should stay out of this election.” Which sort of makes it seem like he does not think that being BFFs with Putin is a good idea? Weird! But even Trump's running mate Mike Pence does not seem to think this is a good idea!

“The FBI will get to the bottom of who is behind the hacking. If it is Russia and they are interfering in our elections, I can assure you both parties and the United States government will ensure there are serious consequences."

Of course, he did add a HOWEVER.

"That said, the Democrats singularly focusing on who might be behind it and not addressing the basic fact that they've been exposed as a party who not only rigs the government, but rigs elections while literally accepting cash for federal appointments is outrageous. The American people now have absolute and further proof of the corruption that exists around Hillary Clinton. It should disqualify her from office, if the media did their job."

Honestly, even as a (gasp!) Bernie supporter who was very upset by the emails... that was the DNC being awful, not Clinton, and those emails had nothing to do with "accepting cash for federal appointments." If she were "disqualified" for something the DNC did, then technically every Democrat would be disqualified from running, which would make this not a Democracy.

Also, also: it is probably a good idea to figure out how that shit got hacked -- regardless of how we feel about their contents -- because maybe next time it will be something that could hurt all of us.

Naturally, despite all of these people suggesting that urging Russia to hack us so that he can win an election, Trump is sticking to his guns, as he is wont to do: