Why Is Extreme Conservative Bob Bennett Going To Lose His Senate Primary? 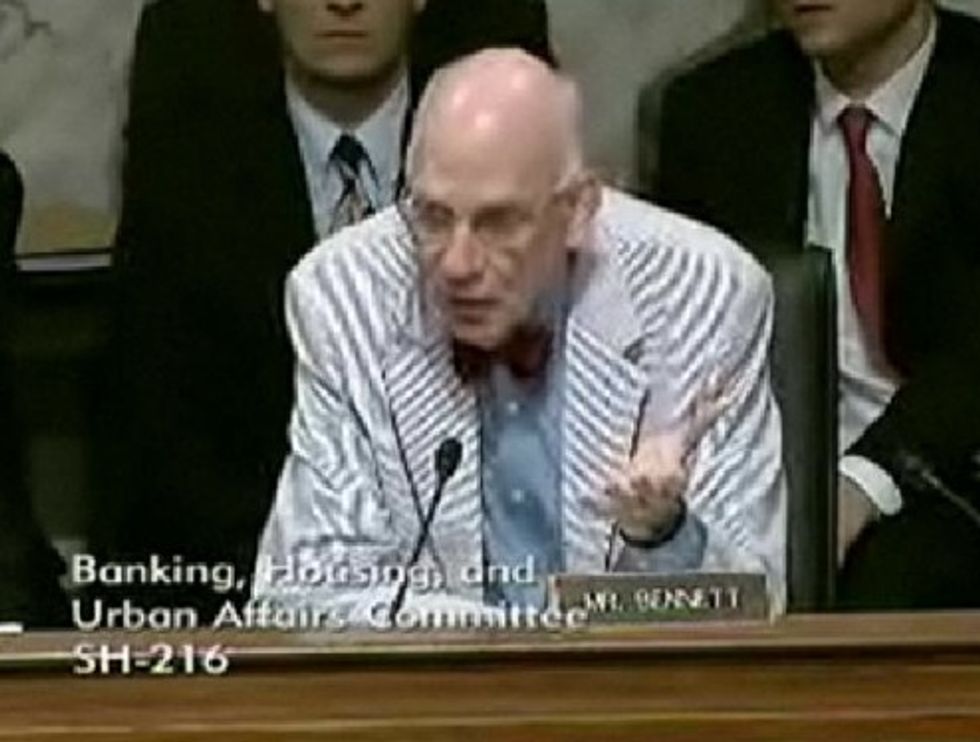 Utah's "junior senator," the elderly three-term Republican Bob Bennett, is a 150% conservative monster who hates poor people almost as much as he loves his state's official god, the Mormon Space Jeebus. So why is he losing so miserably going into his state's Republican nominating convention?

Amid all the reports of how dire Bennett's situation looks, not many are really explaining how this came to bear. Here's something, at least:

Most of the resistance to Bennett has centered around his support for the federal bailout of the financial industry. But Bennett's opponents have also criticized him for his unwavering defense of earmarks, which send taxpayer dollars to projects in lawmakers' districts outside the competitive process required for other federal spending.

He voted for TARP and he likes earmarks. Are you fucking kidding me? Does he also breathe oxygen? Is he in favor of the sun rising in the morning? (We're not, for the record, but no one will listen.)

Here's more, from a recent debate:

Bennett, considered a moderate in Utah, told about 130 delegates and more than 100 others at Utah Valley University that eliminating earmarks wouldn't reduce the deficit by one cent. That would only give President Barack Obama, a Democrat, more power to decide which projects get funded, he said.

Bennett added that his earmark requests have always been transparent.

"I've not done any of this backroom thing that people are talking about," he said.

Attorney Mike Lee, thought to be one of Bennett's most credible challengers, called for a one-year moratorium on earmarks. He also subtly criticized the senator, saying the recently passed health care bill is unconstitutional because it includes a mandate to buy insurance.

Ahh, here's what we're looking for. This is the reason, or one of them. That "subtle [criticism]" is in reference to the Wyden-Bennett health care reform bill, one that he WORKED WITH DEMOCRAT RON WYDEN to produce. The bill, if you are unfamiliar, would basically eliminate the employer-based health care system, then require employers to make up some of those costs in the form of raises to employees, who could then purchase individual insurance on exchanges. To keep costs down, of course, it would include... AN INDIVIDUAL MANDATE! It was a pretty good bill to work with, but would never go anywhere. If you thought it was hard enough to reform the system without really changing the employer-based market and its hundreds of millions of basically satisfied insurees, well...

The Club for Growth has given a lot of money to his opponents' campaigns for this reason, and now mandate-lover Mitt Romney -- "the state's most revered politician" -- will have to come in to try and later fail to save the communist Bob Bennett, the most conservative person in history, the end.