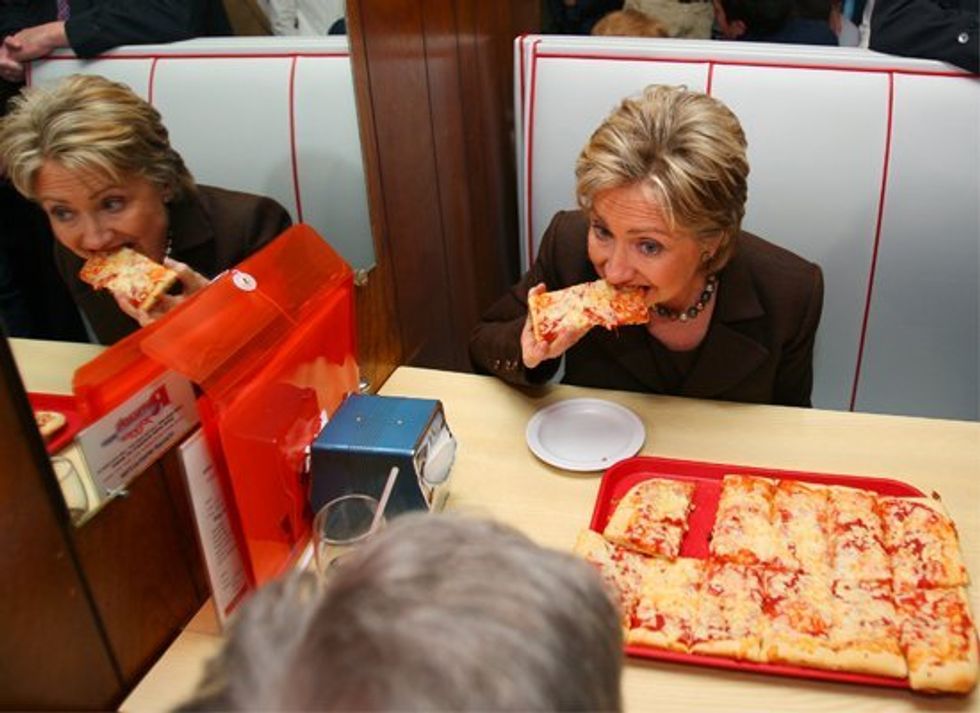 Are you subscribed to the hottest new food blog, aside from the resurrection of Wonkette's mommyblog recipe hub? It is called "Wikileaks," and it's just the best. In the mood to put food on your family, but REALLY wish you could get the recipe from Hillary Clinton's campaign team, lovingly curated by Julian Assange and his precious team of America-hatin' Russian hackers? HAVEN'T WE ALL BEEN THERE BEFORE?

Listen up, chefs and wanna-be chefs. One of the OMGTERRIBLE emails released by WikiLeaks shows Clinton campaign chair John Podesta helping this guy Peter Huffman, whom Epicurious describes as "a Merrill Lynch financial adviser who's done work for the Clinton Foundation" (CORRUPTIONS!!!!111!), figure out how to make some damn risotto, and how to make it damn good. Huffman is like "but I don't WANNA pour the stock in gradually, I am too busy doing pay-to-play Benghazi with the Clinton Foundation," and Podesta is like "You have to do it that way, dumbhead! While you are slowly adding stock to achieve the perfect risotto, I will help Hillary do Whitewater to Vince Foster again."

OK, so Podesta is apparently a really good cook. Politico quotes him saying that, on top of risotto, he "make[s] a pretty mean moussaka, pastitsio, baklava and spanakopita," all of which are YUM. We need these recipes.

And we bet Hillary has some cooking tips too! We already know about the Clinton family "Roasted Rack of Lamb with a Pumpkin Thyme Crust" and also Hillary's recipe for oatmeal cookies, which she DOES TOO FUCKING MAKE, even though she's not just hanging out in the kitchen making cookies all the time, as she splained us in 1992.

We ALSO TOO bet Hillz's lady adviser Huma Abedin makes some delectable delights, and even more than that, we're pretty sure Donna Brazile and the other folks at the DNC probably have some pretty great recipes they've sent the Clinton campaign, while they were taking breaks from STEALING THE ELECTION FOR HILLARY, or whatever the scandal du jour is, we don't know.

Now look, we get it: If Killary The Devil wasn't the flawed Democratic nominee, there wouldn't be NOBODY from Merrill Lynch emailing Podesta asking for risotto cooking tips, because all of Merrill Lynch would be IN JAIL, where they ain't got no risotto. But she IS the nominee, so we might as well find out if Hillz's macaroni 'n' cheese is as good as ours. (SPOILER: Wonket's mac 'n' cheese is so damn good you'll literally die of cheese-gasms.)

The point is that WikiLeaks is obviously a very valuable organization, and it should definitely continue its vital work in exposing the Clinton campaign's culinary secrets to the world. Maybe Hillz has a Pinterest board or something! Assange should look into that.

Don't bother looking into Trump's recipes, though, because A) Daddy Putin doesn't want you messing with Trump's business and B) No one is interested in learning how Trump makes his secret late night snack concoction of Vienna Sausages, orange dandruff and loneliness. Literally no one. Ew. Gross.