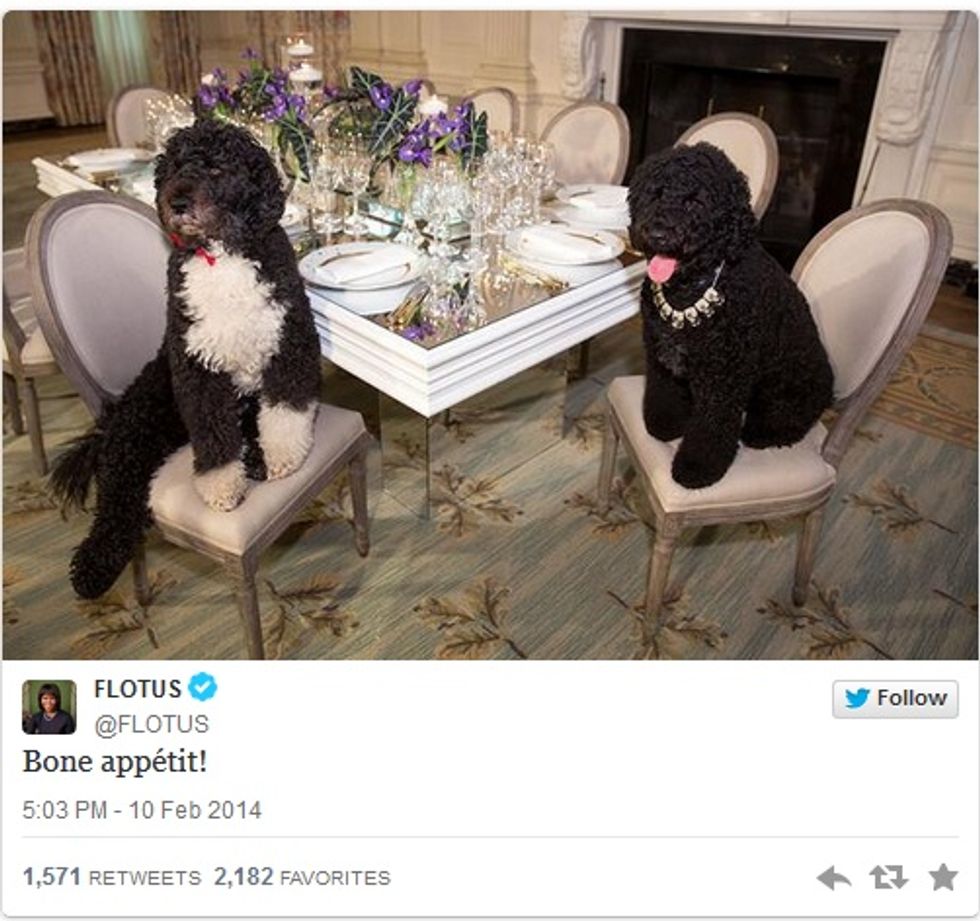 The Daily Caller's residentSpeaker of Truth to Black Power and professional troll Neil Munro just wants you to know how outrageous it is that the Obamas have dogs and nice things:

Poverty and unemployment are at near-record levels, the economy is stalled, and a record 47 million Americans are on food stamps, yet aides for first lady Michelle Obama’s tweeted out a picture of her two dogs apparently dining at a table laid with crystal and china.

“Bone appétit!,” the aides added to the insensitive tweet, using the language of France’s queen Marie Antoinette, who was executed by radicals in 1793.

Couple-few things here, big guy: First off, this is a photo of the doggies sitting at a table with no food on the plates. After the picture was snapped, we are going to guess that they were told to get down off the furniture, a command Mr. Munro may be familiar with. Secondly, of the things Marie Antoinette is famous for saying, "Bon appétit" is not exactly a "quote," unless you go around saying, "As Ronald Reagan so eloquently put it, 'Good morning.'" Besides, she's obviously quoting American spy hero Julia Child (also, save the livers). Gosh, is there any reason the FLOTUS might have used "the language of France’s queen" yesterday? Can't think of a one. And third of all, we have it on good authority that Marie Antoinette never punned.

Nunro continues the class warfare, pointing out that "One dog appears to be wearing a jeweled necklace." You know, of the sort that you might find at Target for a few bucks.

Obama’s media courtiers applauded the ostentatious display of canine luxury. “Bo And Sunny Obama Get Decked Out For The State Dinner And It’s Pretty Adorable,” says the headline on an article at the Huffington Post.

Munro even provides historical context as proof of Liberal Media Bias, telling us all about how poor Nancy Reagan was "relentlessly criticized" for buying a new set of White House china "during the painful recession created under Democratic President Jimmy Carter," even though that china was "bought with donated funds." What's more, the Reagans never served imaginary filet mignon to their dogs off that china, while there's no limit to the expensive delicacies that Munro can imagine Bo and Sunny devouring, no doubt attended by a demoted Air Force general who hand feeds the "palace dogs," wipes their mouths, and then goes to a secret White House chamber to have Gay Marriage crammed down his throat.

It is nice, we suppose, to see at least see one post on The Daily Caller suggesting that poverty and unemployment are actual problems, rather than the inevitable result of people just being lazy or incentivized to idleness by Big Government.

Follow Doktor Zoom on Twitter. He occasionally lets his betta fish, Flushy III, swim around in a crystal goblet, just to stick it to the poor.