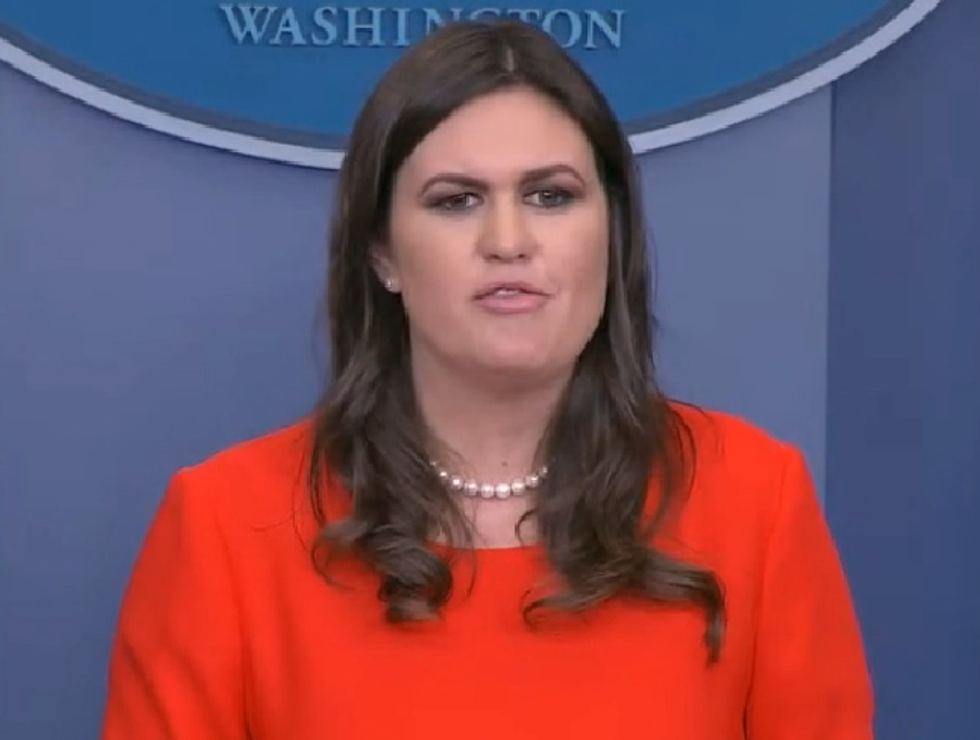 yes it's time to do this again

Tuesday morning, after Donald Trump tweeted that New York Democratic Senator Kirsten Gillibrand is a big whore who will do ANYTHING for campaign contributions, every woman on "Morning Joe" and every person in the Wonkette secret chatcave wondered how the hell press secretary Sarah Huckabee "Poot Lips" Sanders is going to spin this one. Mika Brzezinski went as far as to say if Sanders can't bring herself to condemn this, she needs to just resign and go somewhere to do some hard thinkin' about when exactly she sold her soul to the bowels of hell. (Not Mika's exact words.)

We're not expecting much, of course, from today's press briefing. Based on Sanders's behavior in Monday's briefing, and based on the absolute bullshit she gave reporters as "proof" Donald Trump's accusers are lying, we wouldn't be surprised if she says that what Americans REALLY are concerned about is appointing a special counsel to find out why Kirsten Gillibrand is such a slut in the first place.

Yeah, we're pretty sure that's how far gone Sanders is. But we'll see! Maybe she will redeem herself! MAYBE!

Let's liveblog and find out:

3:06: We know we are mean to SHS sometimes (because of her actions), but we would actually love it if she took a step to redeem herself today. We would even cheer for her! But we really don't think that is about to happen.

And just as quickly, she is now gone, because "someone else" is going to talk to us first. It's about the attempted terror incident in New York City that happened yesterday, so we guess that's fine. Of course, he's probably going to just say a bunch of racist shit about immigrants.

3:18: OK, the guy is done with his briefing, and now reporters are asking him questions. COME BACK, SARAH HUCKABEE SANDERS, WE WANNA SEE HOW YOU FUCK THIS UP.

3:25: How you all holding up? Is the waiting for SHS making you CRAZY? We are fine over here, thank you for asking.

3:27: Last question for "someone else"! Your favorite Captain Poot Lips will be back in a minute!

3:28: Here she is finally. FINALLY. Brief statement about some crap, blah blah blah, why does this White House think we care about what they're failing at at any given moment?

ANSWER: Trump has said this "many times before" and "exposed the corruption of the political system," blah blah blah "drain the swamp," etc. more words. In other words, Sarah Huckabee Sanders is not going to answer your question except to say Trump thinks ALL politicians are whores. (But especially the ladies.)

3:31: So there you go, SHS has defended Trump on charges of calling Kirsten Gillibrand a whore. We told you not to expect much.

3:35: SHS says this White House is VERY CONCERNED about Americans getting accurate information, LOLOLOLOL OK, let's just end this press briefing now so we can go back to focusing on Alabama.

3:37: Question from NBC's Kristin Welker! How can Donald Trump NOT KNOW all the ladies he grabbed by the pussy, when they have PICTURES TOGETHER?

Answer: Some more deflecting horseshit. Also, stating for the record once again, Sarah Huckabee Sanders would like to reassert that Bitches Be Lyin'.

ANSWER: "Only if your mind is in the gutter," would you think Donald Trump, purer than the fresh-fallen snow, was saying a dirty-dirty like that.

FACTCHECK: Sarah, you are full of shit.

3:40: And now SHS is reading out a memorized laundry list of reasons why Kirsten Gillibrand is a big whore, of the political kind.

3:42: Question: Why did Trump go after Gillibrand in such a personal way?

This is so fucking stupid.

3:44: And finally a question about Russia, which SHS says the Trump administration has been "very hard on." Remember what she said above about how this White House is VERY CONCERNED about making sure Americans get accurate information? Uh huh.

And now it is over!

In summary and in conclusion, Donald Trump called Kirsten Gillibrand a whore on Twitter, and Sarah Huckabee Sanders says you are a dirty strumpet with your mind in the gutter for acknowledging that fact.

The fuck she says.

3:45: Thank you for reading our liveblog, which we created with love! Click the links below to tip your bartenders!