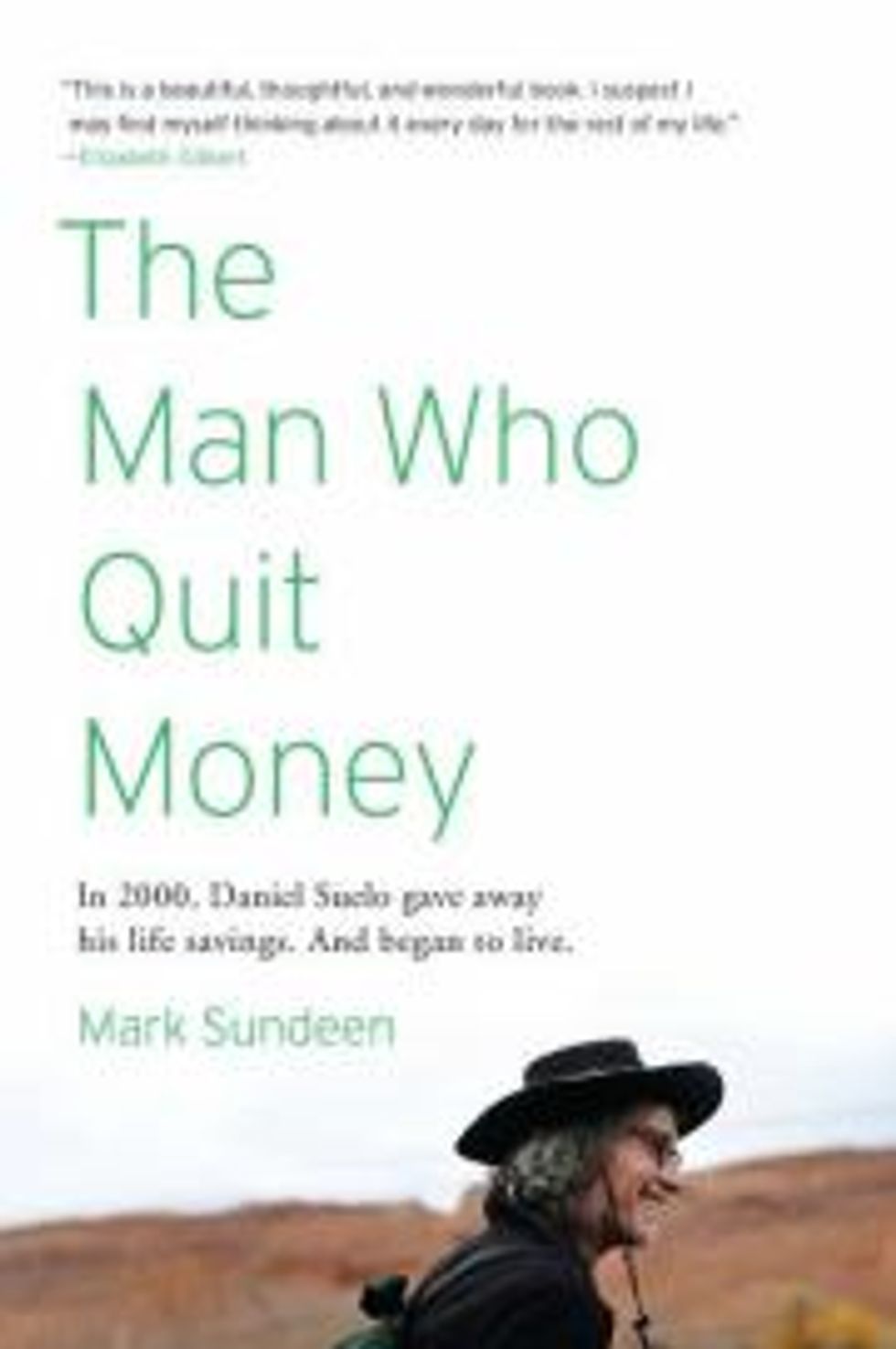 American Tax Day is an unhappy time for most people, as we realize how little money we made during the previous year, or how much we're paying in taxes, or how those good tax credits don't apply for one reason or another, or how awful it is that we live in a country where the government extracts whatever it wants from our earnings and then spends it all on horrible bat-wing robot murder monsters soaring the skies over Afghanistan and Iraq and even right here in the U.S.A., while American kids go to bed hungry and teenagers with no education and no income are compelled by law to give birth to offspring they cannot possibly care for, and that the government will also not care for, because that violates Freedom. The culprit in all these crimes is Money, and a lovely man named Daniel Suelo has succeeded in quitting money altogether while living a rich and varied life.

Suelo's existence is full of friends, community meals, hiking and camping in the slickrock country of Utah, volunteering at a shelter for abused women, and now seeing a book about his remarkable life that is spreading his gospel to unsatisfied participants in the money system around the world. Also, this year's Tax Day is Quit Money Day, which means we can all consciously "spend" a whole day without spending money.

The usual Tax Day of April 15 fell on a Sunday this year, giving us a brief reminder of the fading power of the Day of Rest and the many social laws that used to ensure we had at least one out of seven days to enjoy without shopping and debt and misery. The language the U.S. Government used to announce the delayed filing deadline -- a "two-day reprieve" -- is exactly the language used when speaking of prisoners on Death Row. With this great annual stress and the moral accounting of the previous year that goes along with preparing one's tax forms, there is also real death: a 6% increase in traffic fatalities is one grim feature of Tax Day. So please be extra careful when driving tomorrow, or just don't drive at all! Maybe take the day off, for Mental Health, and try to not spend a nickel or click "Buy It Now" for a whole day.

Daniel Suelo himself is encouraging the rest of us to make April 18 a day without money. We needn't get too fussy about it. If there's an automatic payment of the electric bill or whatever, just keep it out of mind. But what if we went all day tomorrow without slapping down the debit or credit cards, without blowing through the usual twenty bucks for coffee and habitual snacking. What if we eat at home, eat what we have, entertain ourselves (preferably without anything we're paying for, like the cable television), maybe read a book from the library, say hi to our dogs and our children, etc. Everything is so much more pleasant without ADVERTISING yelling at us all day, too. Let's have silence, or some classical music instead of the teevee or the commercial radio. It's spring, maybe Stravinsky's Rite of Spring, or some Vivaldi! Maybe just listen to the birds singing, as they are all quite happy about it being spring. No money, all day!

Now to The Man Who Quit Money, the delightful new book by Mark Sundeen about the life and times of Daniel Suelo, a wandering mystic who tried all the normal ways of American Society and found that none of them fit his mind and spirit. Sundeen is a smart writer who comes to this story well equipped with knowledge of the various prophets and teachers and traditions that tell us to live simply, even though very few of us do so by choice. This is a story with a shared Buddhist/Christian philosophy, and Suelo's life is nearly as radical as the recorded lives of Siddhārtha Gautama or Jesus of Nazareth. (Suelo decides against the Hindu sadhu approach of the Begging Holy Man, because it's just too foreign to the culture of the Modern American.)

What makes his quest so compelling is that he knows almost from the beginning of his adult life that the answer for him is to live without money, but it's such a drastic step that it takes most of two decades for him to finally leave his life's savings (thirty dollars) in a phone booth on a highway and be done with it. Through his work in the Peace Corps, the fundamentalist churches and the secular non-profits, what keeps Suelo from satisfaction is the minimal money he earns from his good deeds. It is only by divorcing his work from the way most of us are paid for work that he finds his Way.

While he does spend a lot of time literally living in a cave, much like the Desert Fathers (and Desert Mothers) who created Christian monasticism in the 3rd Century, Suelo also spends a lot of time at parties and housesitting for friends in Moab and taking road trips and just bicycling around the Canyon Country. Since a national magazine profiled him a couple of years ago, he even has disciples who show up at his cave camp to learn the philosophy of simplicity and compassion. This is more St. Francis ministering to the townsfolk than St. Anthony the Great alone in the Libyan desert, more Thich Nhat Hanh's "engaged Buddhism" than the isolation of the forest monastery.

Suelo's life is not perfect, because no life is perfect. He suffers from bad teeth and lonely nights, and there's no Plan B for old age. But teeth can be fixed (and have been, through the pro bono work of a dentist friend), and many wise people have sacrificed a romantic life for a deeply fulfilling spiritual life.

As for old age and the final years, both are coming for all of us, regardless of how much we've got in the 401k or Social Security. The awful story of 83-year-old B-movie starlet Yvette Vickers resonates with so many people because this is what the end will be like should we choose the void of Social Media and shallow connections over real-life community: Vickers' mummified body was found about a year after she died, inside her faded Los Angeles home, the computer screen still glowing:

The Los Angeles Times posted a story headlined “Mummified Body of Former Playboy Playmate Yvette Vickers Found in Her Benedict Canyon Home,” which quickly went viral. Within two weeks, by Technorati’s count, Vickers’s lonesome death was already the subject of 16,057 Facebook posts and 881 tweets. She had long been a horror-movie icon, a symbol of Hollywood’s capacity to exploit our most basic fears in the silliest ways; now she was an icon of a new and different kind of horror: our growing fear of loneliness. Certainly she received much more attention in death than she did in the final years of her life. With no children, no religious group, and no immediate social circle of any kind, she had begun, as an elderly woman, to look elsewhere for companionship. Savage later told Los Angeles magazine that she had searched Vickers’s phone bills for clues about the life that led to such an end. In the months before her grotesque death, Vickers had made calls not to friends or family but to distant fans who had found her through fan conventions and Internet sites.

Vickers’s web of connections had grown broader but shallower, as has happened for many of us.

That kind of True Life Mulholland Drive tale should make anyone have a thought or two about how things will end. Maybe Suelo will disappear into the desert like an old coyote, eventually feeding a a juniper seedling, but he's a social enough creature that his last years will likely be spent in the comfortable casita of one of his many homeowner friends in Utah, with as much charity medical care as he might need to make the end pleasant.

But enough about death; it will come when it's ready for us, and whether we've paid our quarterly estimated taxes on time or not. If you're in Missoula tomorrow evening, head over to the main library to hear Sundeen and Suelo speak about the book and living without money for either a lifetime or just for a day.

Ken Layne retired from this site and the News Media just six weeks ago! But Rebecca threw out her back, because she is typing too much and not Exercising Every Day, and she asked if he had anything that he might be able to post, to be a helpful pal. So here is a book review. Hope you're all well! Layne's most recent book is a novel called Dignity.