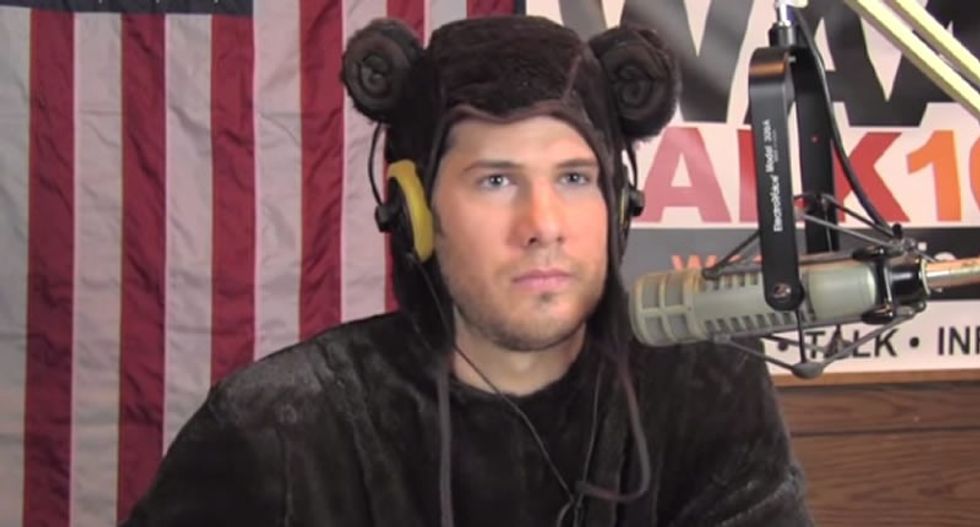 Crowder, the comedic genius who shoved a union guy* and then cried victim when the union guy punched him back a couple years ago, briefly emerged from obscurity yesterday after he said some dumb shit about a Washington Times summary of the Rock interview. Seriously, go read that Chris Rock interview. It's good.

The problem for Steven Crowder, of course, is that Chris Rock is everything Steven Crowder isn't: smart, successful, and -- most important -- funny. Oh, and Chris Rock, in contrast to Steven Crowder, is a racist who thinks that white people are sometimes a little responsible for racism. Let's take a look at the terrible, horrible racist thing Chris Rock said in his interview, in response to Rich's hypothetical question about how Rock would do comedy-based reporting on Ferguson, Missouri:

What would you do in Ferguson that a standard reporter wouldn’t?

I’d do a special on race, but I’d have no black people.

Well, that would be much more revealing.

Yes, that would be an event. Here’s the thing. When we talk about race relations in America or racial progress, it’s all nonsense. There are no race relations. White people were crazy. Now they’re not as crazy. To say that black people have made progress would be to say they deserve what happened to them before.

So, to say Obama is progress is saying that he’s the first black person that is qualified to be president. That’s not black progress. That’s white progress. There’s been black people qualified to be president for hundreds of years. If you saw Tina Turner and Ike having a lovely breakfast over there, would you say their relationship’s improved? Some people would. But a smart person would go, “Oh, he stopped punching her in the face.” It’s not up to her. Ike and Tina Turner’s relationship has nothing to do with Tina Turner. Nothing. It just doesn’t. The question is, you know, my kids are smart, educated, beautiful, polite children. There have been smart, educated, beautiful, polite black children for hundreds of years. The advantage that my children have is that my children are encountering the nicest white people that America has ever produced. Let’s hope America keeps producing nicer white people.

It’s about white people adjusting to a new reality?

Shocking, isn't it? Of course, Crowder didn't bother quoting the whole thing, because he only read the Washington Times' considerably shorter excerpt. And then Crowder explained exactly why Chris Rock is a huge racist who needs to STFU:

Now, I hate to be in the business of questioning comedians. Comedy is comedy, and just like any form of art, it shouldn’t be viewed through the lens of journalism. The problem here is that Chris Rock wasn’t doing comedy. He was giving a deliberate answer in an attempt to affect cultural change ...

I guess the ultimate question comes down to: what’s the number? How many years back must individuals be held responsible for actions not of their own? Two hundred years? Three hundred? Give us a ballpark.

Now, you see, Chris Rock is a terrible racist for judging today's white people, who on the whole are nice non-racists, just because there used to be racism in the past, and it is all gone now. That seems reasonable. Also, we're going to have to quibble about that claim that Rock isn't doing comedy here. It's a really funny, smart observation, especially the comparison to Ike and Tina Turner and the bit about how Chris Rock's children are lucky to be encountering "the nicest white people that America has ever produced" -- which never made it into the Washington Times piece, because Chris Rock is such a racist.

Besides, you know who was REALLY terrible? Not just "crazy white people," says Crowder, but all those black slave traders. Yes, that's his answer to Chris Rock: Africans sold slaves, so shut up, you racist.

Also, is this standard exclusive to “crazy white people”? What about black, African slave-traders? You know, the originals? As a matter of fact, slavery still goes on in many parts of Africa today (unlike here in the less homogenized United States). Should all black people “own” these actions as well? Is it limited to color, actual race or geographic location?

The prejudices you hold today (against “white people”) is very much like the prejudice Voltaire held against people of color. It was wrong for him to be racist, of course, but one of his misguided reasonings (among many) was that he believed blacks to be less than humane, due to their treatment/enslavement of other Africans. The main difference in historical contexts between his racism and yours, is that he was unfairly applying a generality to a race of people currently abusing their fellow humans. You apply your generality based on that of past actions. Both are terrible. Yours is just worse.

Exactly the same, except worse, because there is no more institutional racism today. Steven Crowder knows this, because he read about Voltaire on Wikipedia.

And finally, of course, Steven Crowder knows that Chris Rock is a huge hypocrite, because he did that "black people vs. niggas" routine -- which Rock stopped performing shortly after it came out in 1996, since he's sick of white people quoting it, endlessly, as proof that The Blacks use that word all the time and it's so unfair that he can say it and white people can't: "You like using the n-word. We get it." Hahaha, that Chris Rock is such a hypocrite, always saying that thing.

Of course, if Crowder had bothered reading the full interview, he might have found an answer to his own question about why, just maybe, racism is still maybe a bit of a problem (not that Crowder would buy the answer, but here it is):

But the thing is, we treat racism in this country like it’s a style that America went through. Like flared legs and lava lamps. Oh, that crazy thing we did. We were hanging black people. We treat it like a fad instead of a disease that eradicates millions of people. You’ve got to get it at a lab, and study it, and see its origins, and see what it’s immune to and what breaks it down.

Or maybe racism will just go away if black comedians just shut up about race.

In summary, Steven Crowder is still an unfunny idiot, and you should go read the whole interview.

*Clarification: actually, the unedited video is unclear on who shoved the union guy. He was knocked to the ground and then punched Crowder, but the video does not show who shoved him. Crowder's edited piece, of course, completely cut out the shot of the union guy on the ground and made it look like an unprovoked attack.