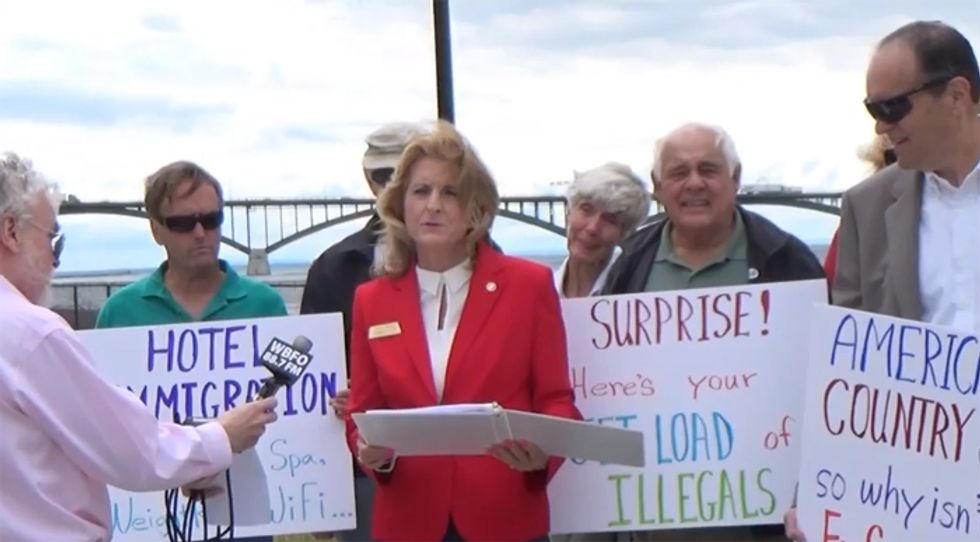 This serious-looking lady surrounded by insane anti-immigrant signs (including one decrying thedebunked "immigrant resort with Wi-Fi and a weight room" story) is Kathy Weppner, a Republican candidate for Congress from Buffalo, New York. She's a birther who has stated that Bill Clinton once had a sexually transmitted disease, and she once had her own local rightwing radio show where she enthusiastically interviewed Orly Taitz. And she is definitely someone who needs to stay on Wonkette's radar -- just look at her brilliant email Q-and-A with The Buffalo News. But that's not why we're talking about her today. This is why we're talking about her today: Yesterday, she tweeted this fairly nutso message claiming that Guatemala is blackmailing the U.S. for aid:

"Infected poors"? As sharp-eyed Wonkette tipster "S.E." says, maybe Weppner is actually a "performance artist who reads Wonket all day." We won't claim that Wonkette invented the locution "poors," but it is pretty much a staple of the in-house Style Guide.

Alan Bedenko at the Buffalo weekly paper Artvoice bravely dissected Weppner's claim that Guatemala is threatening to send a whole bunch more "infected poors" if America won't #paythefuckup, and finds that it is, of course, nonsense. It's from an article published on a Heritage Foundation website, the Daily Signal, and no, Guatemala isn't demanding a ransom lest it Unleash the Infected Kraken on us -- instead, President Otto Perez Molina of Guatemala said that $2 billion in aid and investment to Central American countries would do a lot to fight poverty and crime, and would encourage people to stay home. That's different, isn't it?

Bedenko goes on to do a rather exhaustive debunking of a lot of nonsense in a speech Weppner gave yesterday in front of Buffalo's Peace Bridge, which links the U.S. and Canada -- apparently Weppner considered it a prime location for a speech about stopping illegals and poors and browns, since the bridge is at a border. Here it is, if you feel like some ear-torture -- Weppner's media people (if she has any?) didn't bring a wind shield for the mic.

We won't repeat all of Bedenko's analysis here, since it's more fact-checking than a nine-minute speech in the wind maybe needs, but it's clear Weppner sure loves to get her facts from Fox, like the assertion that

"70% of our border agents have been pulled off our borders and reassigned to do paperwork processing. We know this because a border patrol agent is speaking out."

A real Border Patrolman said it on Fox, so it has to be true! Now, we haven't been able to verify or debunk that statement by border patrol union rep. Hector Garza, but it seems just a tad unlikely. Of course, Garza also said that Somali pirates were flying without ID or something, so maybe he is correct on this one as well.

In any case, we'll enjoy the derp from Kathy Weppner while we can -- she's running against incumbent Democrat Brian Higgins, who took the 26th District with 69.7% of the vote in 2012, so her entertainment value will probably be restricted to the 2014 campaign. Maybe she can get a job at Fox?