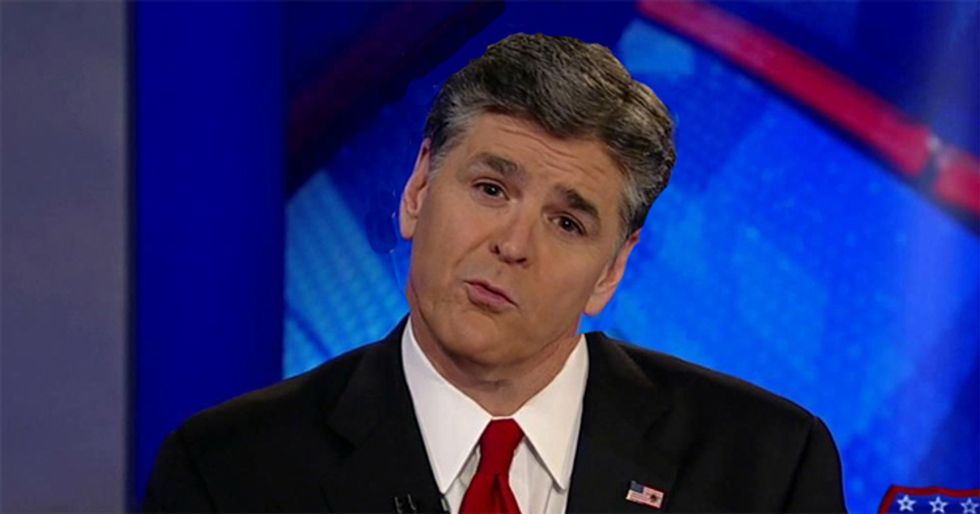 Maybe not so trustworthy?

Now that Roger Ailes and Bill O'Reilly have gone bye-bye from Fox News thanks to sexual harassment lawsuits that ended up with the boys-will-be-boys receiving far more payout money than the accusers who accepted settlements, it's time for more shoes to drop. Or perhaps be lobbed with great force. The latest came on Friday, when former Fox News guest and professional anti-Muslim rabble rouser Debbie Schlussel accused Fox host Sean Hannity of asking her to go to his hotel room, then when she refused, shutting her out of speaking during an interview and then dropping her from his roster of regular guests.

Schlussel says Hannity invited her to come to his hotel room twice during an event in Detroit, though she didn't say when this happened exactly:

He had some event at a bookstore where...he signed his book for people standing in line. He asked me to meet him at this book signing. So I met him there, and it was very awkward. He had me stand up there with him while he signed books and I felt very weird. These people don’t know me and they didn’t come for me to sign their books. And so then I left to get ready for the show and he said, "Why don’t you come back with me to my hotel?" and I said no, I have to get ready for the show.

Schlussel said once she got to the studio, Hannity again asked her to come to his hotel, and she again declined. From her description, it's not altogether clear whether this second proposition happened before or after the broadcast, but she says her father and brother were "there in the green room" -- she didn't specify whether they overheard. She said Hannity and his then-executive producer Bill Shine, now the co-president at Fox News, "treated me horribly" on the program. Hannity allegedly told her in advance that he and Schlussel would "double team" the Palestinian guest on the show, but then when the broadcast started, "every time I tried to open my mouth and say something, they yelled at me and said obey your host, you can’t say anything or else we’re gonna shut off your microphone.” Sort of gives you some insight into the fair-and-balancedness of the Fox News production process, too, doesn't it?

When she turned Hannity down the second time, Schlussel said, he made it clear she done goofed and consequences would never be the same:

And then after that, I wasn’t booked on a show again. And he called me and yelled at me. It was made clear to me that I didn’t go back to his hotel with him after and all this other stuff, and I got a very weird feeling about the whole thing, and I kind of knew I wouldn’t be back on his show.

Schlussel added that a female executive producer for Hannity's show nicknamed "Flirty Flipper" (Schlussel didn't otherwise name her; the Source of All Knowledge identifies the producer as Jill Vitale, who has a dolphin tattoo) resigned at some point. Schlussel hinted there's a "big story" there, too: "Why did she quit? Because there's a big story behind it, and it's not an above-board story why she quit." Huh. We're gonna go with "unsubstantiated second-hand rumor" on that one.

Hannity was Most Displeased, and sent an angry statement to several media outlets; LawNewz ran an unabridged version. Following the best stylistic practice for press releases, the statement uses all-caps, because Hannity is a man of the internet-commenting people:

LET ME BE CLEAR THE COMMENTS ABOUT ME ON A RADIO SHOW THIS WEEK by this individual ARE 100% false and a complete fabrication.

This individual is a serial harasser who has been lying about me for well over a decade. The individual has a history of making provably false statements against me in an effort to slander, smear and besmirch my reputation.

The individual has not just slandered me over the years but many people who this individual disagrees with.

My patience with this individual is over. I have retained a team of some of the finest and toughest lawyers in the country who are now in the process of laying out the legal course of action we will be taking against this individual.

In this fiercely divided and vindictive political climate I will no longer allow slander and lies about me to go unchallenged, as I see a coordinated effort afoot to now silence those with conservative views. I will fight every single lie about me by all legal means available to me as an American.

Schlussel and Hannity have a long history of conflict; in 2007, she accused him of "deliberately ripping off" one of her anti-Muslim rants, insisting it was only the latest of several such alleged plagiarisms. Then in 2010, Schlussel accused a charity he supported, the "Freedom Alliance," of being a big scammy scam that didn't really spend much on its stated mission, helping children of soldiers who'd died or been injured in Iraq and Afghanistan. Instead, she claimed the vets' kids received only between 4% and 20% of the funds, while the charity allegedly spent "millions of dollars" for consultants, and "apparently to ferret [sic] the Hannity posse of family and friends in high style." We'll assume she was going for "fete," but we can certainly understand weasels' possible interest in Hannity as a peer.

LawNewz notes the charity's founder and president wrote back to donors that the allegations were all-caps FALSE and that the group "has never provided planes, hotels, cars, limos, or anything else to Sean." The only thing Hannity ever received from the group, the note said, was its gratitude for helping the troops.

Gawker also helpfully noted at the time that Schlussel was a "Crazy Birther blogger," and added, "Her number crunching checks out, but she is also generally full of shit, so who knows?" David Frum weighed in and said Schlussel's post was cacadoody, adding that she'd admitted her information came from "a blind source, who is, as she admits, a friend of a friend."

Debbie Schlussel certainly has a history of interesting opinions, like warning that the Muslim guy in the boy band One Direction is secretly trying to sexxytime and do jihad to nice Christian teens. She marked Maya Angelou's passing by saying Angelou was "America’s most overrated crappy writer," whose only claim to literary quality was being "Black..and a far-leftist" -- Schlussel closed her RIP with a gleeful, boldfaced "Maya Angelou, Rot In Hell." Back in 2009, Schlussel fretted that "Muslim music dude" A. R. Rahman's acceptance speech for the Slumdog Millionaire score had ushered in "the First 'Allahu Akbar' Oscars." And so on. She is definitely a rightwing nut, and possibly rightwingier and wingnuttier than Hannity, which perhaps weakens today's proclamation at the Gateway Pundit that Schlussel's harassment accusation marks "the latest leftist attack on right-wing media stars." But you see, it's a leftist attack since it's being reported by the lamestream media, and Sean Hannity "always had an impeccable reputation," while Debbie Schlussel is "an absolute lunatic"

Let's be clear: Debbie Schlussel is definitely a rightwing loon, but her crazy politics, and even her longtime animus against Hannity, don't necessarily mean she's making up this harassment claim. Maybe it will be shown to be bullshit -- no source has yet nailed down a Detroit book signing where Schlussel appeared with Hannity -- and Hannity will get a big defamation judgment against Schlussel. But even rightwing women can be harassed, and if there's anything to Schlussel's claims -- like if her father and brother overheard the proposition in the green room -- or if other women come forward, then Fox News may find itself paying another small settlement to an accuser and a big golden parachute to a disgraced star.

Update: In an interview with LawNewz published Monday morning, Debbie Schlussel disputes media reports describing Sean Hannity's behavior as "sexual harassment." She says the incident definitely happened as she described it, but says it doesn't amount to sexual harassment:

“I never thought I was sexually harassed by Sean Hannity, I thought he was weird and creepy not someone I liked,” Schlussel said.

She also said she considered Hannity's threat to sue her for defamation "laughable," since everything she said happened, happened, and that she was considering counter-suing Hannity for defaming her by describing her in a statement as a "serial harasser."

“It’s defamatory,” Schussel said, “Everything I said was true, and truth is an absolute bar to defamation. He on the other hand has a murky record on truth.”

In related news, shares in Amalgamated Popcorn are up slightly this morning.