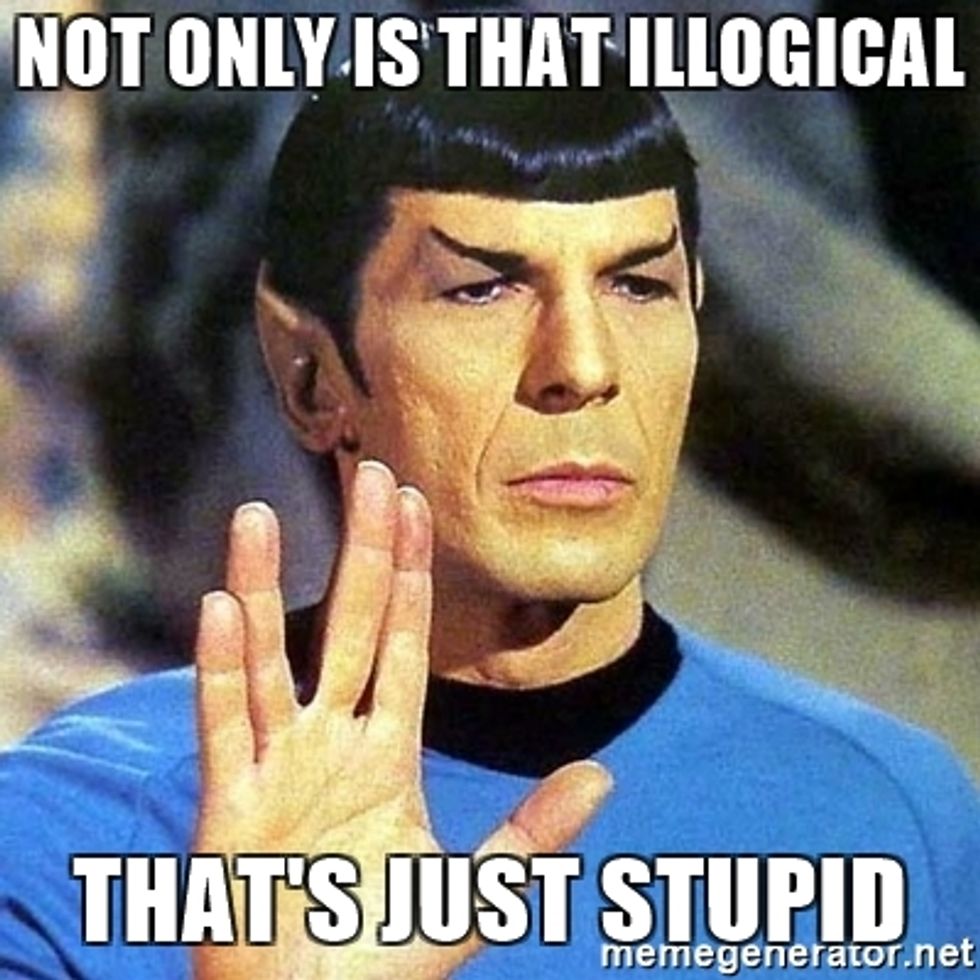 After Leeann Tweeden accused Al Franken of sexually harassing her and taking a gross creeper photo of him grabbing her boobs while she was sleeping, a right-wing Bay Area radio talker, Melanie Morgan, decided she'd come forward with her own tale of having been victimized by Franken in 2000, with a shocking story of Franken cruelly pestering her about budget statistics after the two appeared together on ABC's "Politically Incorrect." It's getting a fair bit of play in the Wingnuttosphere as "Second Franken Accuser" and the like. But where Tweeden's accusations were serious and a huge disappointment to all of us who thought Al Franken was better than that, Morgan's story, while valid, also seems more than a little bit like good old traditional right-wing piling on.

In a piece by Brian Maloney at Morgan's site "Media Equalizer," we don't even get to the substance of her claim until after Maloney presents a fairly exhaustive recap of Tweeden's story. With good reason, because what Tweeden says happened to her was genuinely awful. But eventually, in the fifteenth paragraph, we get to Morgan's story of Al Franken terrorizing her with budget trivia:

Morgan and Franken had a dispute over the OMB’s budget numbers.

“I was invited and unaware of who his guests were going to be that night. I’ve since learned that though few know this, Al Franken was actually a writer for the show,” Morgan said.

“I made a statement about the budget numbers, Franken challenged me, I challenged him back. It was about spending priorities, actually just a mundane discussion. But he obsessed over it.”

And then the murders began!

After the taping, Franken continued to argue with Morgan backstage, and it was apparently some pretty traumatic policy harassment:

“He approached me backstage, angrily called me out on those numbers and insisted he would prove he was right. He wouldn’t leave me alone, he kept following me. As a woman, his presence and proximity to me felt very threatening and intimidating."

Fair! We're not about to suggest she didn't feel intimidated! WE BELIEVE WOMEN.

“I didn’t realize his creepy behavior after the show meant it would continue in the days to come."

And what creepy behavior was that? Well it is kind of weird and creepy, and Wonkette understands if Morgan wasn't pleased by it. You see, Franken got Morgan's phone number from the show's producer and called Morgan at home, to keep badgering her about budget numbers. Morgan doesn't accuse him of anything other than that, but she does her darnedest to make Franken's budget badgering sound like it was JUST LIKE what happened to Leann Tweeden:

“I became fearful and called Carol [the producer] to complain and asked her to tell him to back off. But he made another call after that. I thought that he might end up stalking me at my home in Northern California, it was that bad.

When Franken called a third time about budget numbers -- and let's be clear here, Morgan never says he threatened to come to her house and leave a shredded OMB report on her porch or anything -- she was "outraged and terrified," and told him she would call the police and report him for harassment, and Franken left her alone after that.

To this day, she says she is haunted by it: “I never forgot that experience and it informed me of his lack of character and obsessive personality. I believe every word Leann wrote.”

Now, if a liberal woman claimed she was haunted by being aggressively stalked by a man and his budget statistics, we have a feeling it wouldn't get much play, except perhaps as fodder for mockery by Tucker Carlson. The word "snowflake" might even be used. But we are better than Tucker Carlson, aren't we? And we don't doubt Franken may have called Morgan to make fun of some stupid claim she might have made on TV -- 2000 was about halfway between Rush Limbaugh Is a Big Fat Idiot and the magisterial Lies: And the Lying Liars Who Tell Them: A Fair and Balanced Look at the Right, and Franken's stock in trade at the time was needling right-wingers about what's true and what isn't.

And for what it's worth, in his memoir, Al Franken: Giant of the Senate, Franken freely acknowledges that one of his greatest challenges in making the transition from comedy to politics was learning to let go of his tendency to nitpick facts to death, especially with the press:

I learned that in politics, unlike in show business, being right doesn’t give you the right to be a jerk. I learned that even though aggressively challenging every misstatement and contesting every minor argument had helped me write three New York Times number one bestsellers, it wouldn’t help me win this race.

But let's be clear: Leeann Tweeden deserved (and received, and accepted) an apology, and Franken has asked for a Senate Ethics committee investigation into himself. That's entirely appropriate. But Melanie Morgan stepping on Tweeden's VERY REAL experience seems maybe perhaps like contemptible bullshit, and the Ethics Committee should probably ignore Morgan's repeated offers on Twitter to testify about how she was scarred for life by Franken being a #MathDick, no matter how much the right-osphere trumpets Morgan as a "second accuser."

We suppose the next step will be a WND or Breitbart article by Bill O'Reilly: "Al Franken Stalked My Polk Award."

Yr Wonkette is supported by reader donations. Please click here to throw money at us!