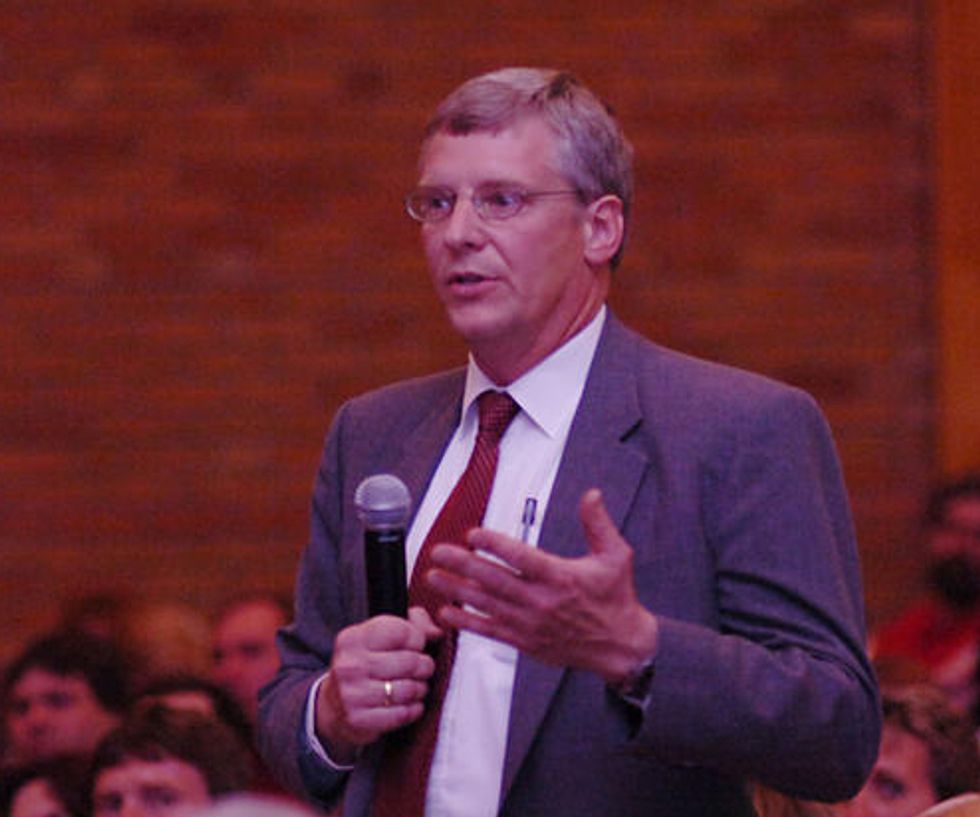 You know what would be a nice change from the usual high school commencement speech? A speech that really lets the graduates know the challenges they'll face in the adult world, that motivates them to be the change they wish to see, that demonstrates that they can make a difference. For instance, at last Wednesday's high school graduation ceremonies in Quakertown, Pennsylvania, the president of the Quakertown Community School Board, Paul Stepanoff, used the occasion to rant at the graduates about how climate change is fake and abortion needs to be banned. It really gave the graduates a whole bunch of reasons to become active in local politics and to work to get Paul Stepanoff off the Quakertown Community School Board. Mission: Accomplished!

Several graduates sent emails and complained at a school board meeting about the speech, in which Stepanoff "complained that the eggs of sea turtles have more protection than human embryos," shared his doubts about global warming, and said that the federal government is too intrusive, except, of course, when it comes to intruding into women's uteruses, which need to be regulated more. One graduate, Wade VanValkenburgh, sent an email to both Stepanoff and the school board asking him to resign:

Paul, you've already ruined my classes graduation, do the rest of the community a favor; either learn how to keep your right-wing opinions to yourself or kindly remove yourself from the field of educating the youth of the community.

Rather cheeky to be calling the school board president by his first name. Kids these days, we tells ya. VanValkenburgh's email added that although he considers himself a Republican, he also "burst out laughing" while Stepanoff spoke:

I could not contain my laughter at the graduation ceremony as Paul spewed right wing opinions, as well as offensive and inappropriate remarks to an audience that had no other choice but to listen to him.

Other students said that they were so annoyed by the speech that they texted each other to make fun of it. Graduate Steve Shelly said that the speech was "awkward" and that it didn't fit the tone of a ceremony that was supposed to be "where we celebrate our hard work the last four years." (Yes, and also the excellent slacking off during that one teacher's physics class, where you could usually get him entertainingly off track with a question or two...)

A parent at the school board meeting, Trish Prush (possibly a resident of the borough of Onomatopoeia), asked for Stepanoff to apologize, saying,

You used this platform for your personal agenda ... You made a black mark on an otherwise beautiful evening. You spoke of wisdom, and I hope you learn from last night's graduates, who conducted themselves with class, integrity and professionalism.

Stepanoff didn't speak during the board meeting, but afterwards told the local paper that several people had complimented him on the speech, and that it was appropriate for graduation because something something all topics open for discussion, shich sort of misses the point of what a "speech" is.

"These graduates are adults, and we should treat them as adults. I spoke about problems they will be facing," Stepanoff said.

As best we can tell, no time for rebuttal or questions was allowed, which would at least have livened things up a bit.

Even though Stepanoff was a douchecanister, graduate Nick Soriano was at least glad he got an anecdote out of the experience:

"I'll tell my kids this story years from now ... It was the defining moment of our graduation ceremony."

As for Stepanoff, we're looking forward to his inevitable visit to Fox News, where he can complain about the graduates' unconscionable attempt to silence him and take away his first amendment rights by complaining about the content of his speech.

Follow Doktor Zoom on Twitter. He should be allowed to glue his poster, he should have a call-in show.