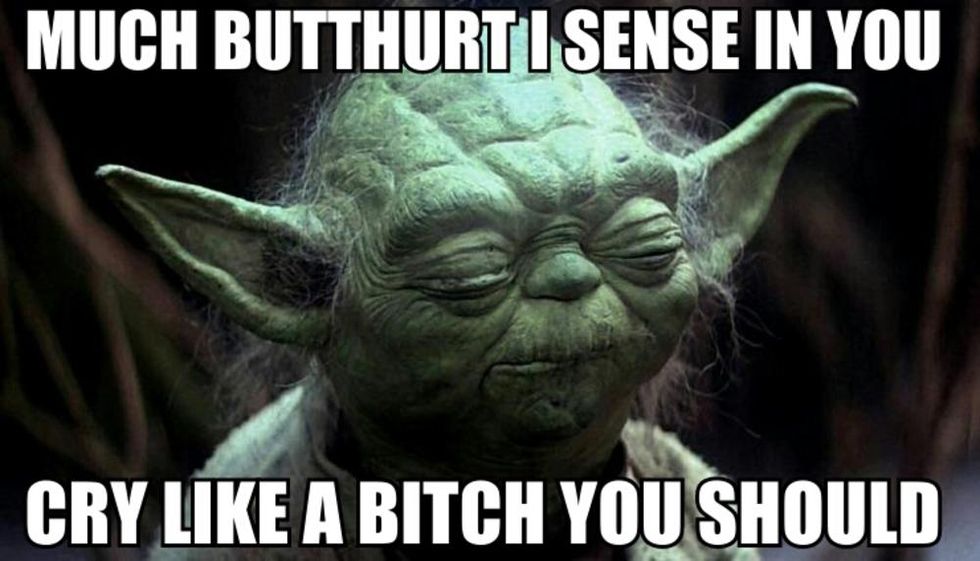 You know how toddlers do sometimes when they skip their naps and the simplest perceived slight turns into a 30-minute-long RAGER of a screaming, crying temper tantrum? Well, that is what is happening to Texas Attorney General Ken Paxton right now, and it is beautiful. We'd say somebody should intervene, but we think we're gonna have to just let him cry it out. He issued the following hysterical screed in response to Friday's Supreme Court marriage equality ruling, because it just hurts so bad to be a fucking loser like Ken Paxton right now. Here are a few of the best quotes:

The truth is that the debate over the issue of marriage has increasingly devolved into personal and economic aggression against people of faith who have sought to live their lives consistent with their sincerely-held religious beliefs about marriage. In numerous incidents trumpeted and celebrated by a sympathetic media, progressives advocating the anti-traditional marriage agenda have used this issue to publicly mock, deride, and intimidate devout individuals for daring to believe differently than they do. This ruling will likely only embolden those who seek to punish people who take personal, moral stands based upon their conscience and the teachings of their religion.

It is not acceptable that people of faith be exposed to such abuse. The First Amendment to the U.S. Constitution protects our religious liberty and shields people of faith from such persecution, but those aspects of its protections have been denigrated by radicals, echoed by the media and an increasingly-activist judiciary. [...]

Displays of hate and intolerance against people of faith should be denounced by all people of good will and spark concern among anyone who believes in religious liberty and freedom for all.

Wow, and we thought Bryan Fischer's declaration that 6/26/15 is the new 9/11 was insane.  (It was. It was very insane.) Earth to Paxton:  The only way this ruling will affect Texas wingnuts is that it'll make life a little more uncomfortable for the severe closet cases who scream about the gay agenda, and then go home to dutifully, occasionally fuck their wives with the lights off while fantasizing about being ass-rammed repeatedly by the Dallas Cowboys. Whether Paxton is a member of that group is something only he knows.

Paxton also told county clerks to ignore the SCOTUS ruling, and it's reported that a few are paying attention, but other county clerks, especially in large cities like Dallas, Austin and San Antonio, are saying "LONG HAIR DON'T CARE" and issuing gay marriage licenses, to gays, in Big Gay Texas. The New Civil Rights Movement collected a few pictures of gay couples getting their marriage licenses, in Texas, which we will shamefully steal and reproduce here.

LOOK AT THESE ADORABLE GAY OLDS IN DALLAS!

If that picture says "destruction of America" to you, then you are a sad dumbass with no life.

TPM found this shot of two Lady Gays, who were the first to get their license in Austin. According to their buttons, they have been together for 31 years! But maybe there was just a special on "31 Years" buttons at the Big Lots and they thought there were cute, lesbians buy weird shit sometimes:

Awwww, all the feels, this is going to make us get all verklempt again. Somebody warm up a bottle for Attorney General Paxton and grab his favorite stuffed animals. Baby needs to go ahead and go down for that nap.