Wingnut Tony Perkins: If Supreme Court Gay Marriages Us, We Might All Die 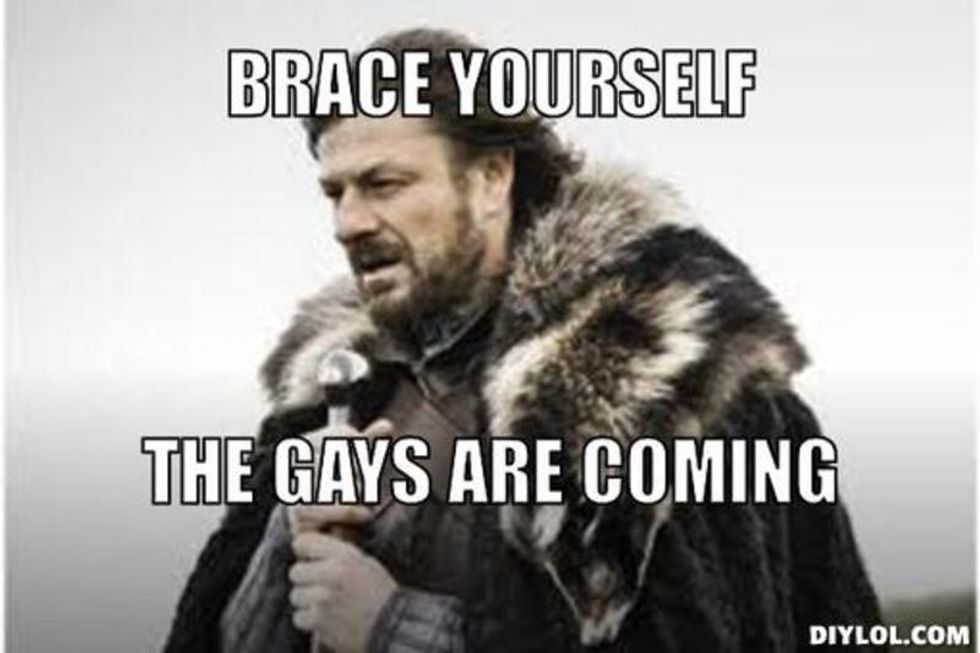 PERKINS: I wonder if it came with a mortgage.

Haha, good one! Except The Gays are not responsible for the decisions lonely ladies make after binge-watching too much HGTV, oh wait they actually are, just kidding. MOVING ALONG.

Here's the bottom line, all right? We know from the social science and from thousands of years of human history, societies rise and fall based upon the strength of families. You want strong communities, strong societies, you have to have strong families. And what's the key to a strong family? It is a marriage between a man and a woman.

But Perkins isn't just looking at historical facts! He's also looking at the social science, or shall we say the "social science" that the religious right uses, which magically comes to the same conclusions they do. Wonder how that happens! (No we don't wonder, they often buy it.)

Again, the social science is clear on this, and people say well, but we're now gathering data on same-sex couples. There's some early data, we don't have long-term data because it just hasn't been around very long, we're talking about a decade. Which is another reason we shouldn't be doing this. Why would you make such a drastic, fundamental, radical change based upon a few years of experience?

While same-sex marriage has only been legally recognized in parts of the United States for a decade or so, we are fairly certain that same-sex couples have been around a lot longer than that. And hey, check it out! They haven't destroyed all of civilization yet. But that will surely come if the Supreme Court rules in favor of marriage equality for everyone.

Of course, that's not for the Court to do. The Court shouldn't even be involved in policy decisions. That's for the legislatures. And that's what's happened. The legislatures and the people have said no, we don't want this. But the courts have stepped in and overturned it.

This really will determine the future of western civilization. It really will. This is very serious.

Yeah, it sure sounds Very Serious. Western civilization might well be destroyed if the Supreme Court allows men who like men and ladies who like ladies -- and have since the beginning of human history -- to have an official stamped document from the state that says "MARRIED."

If that comes to pass, we reckon we'll be feeling PRETTY dumb.