Wingnuts Are Furious About ... Obama Reading a Best-Selling Book By a Newsweek Writer 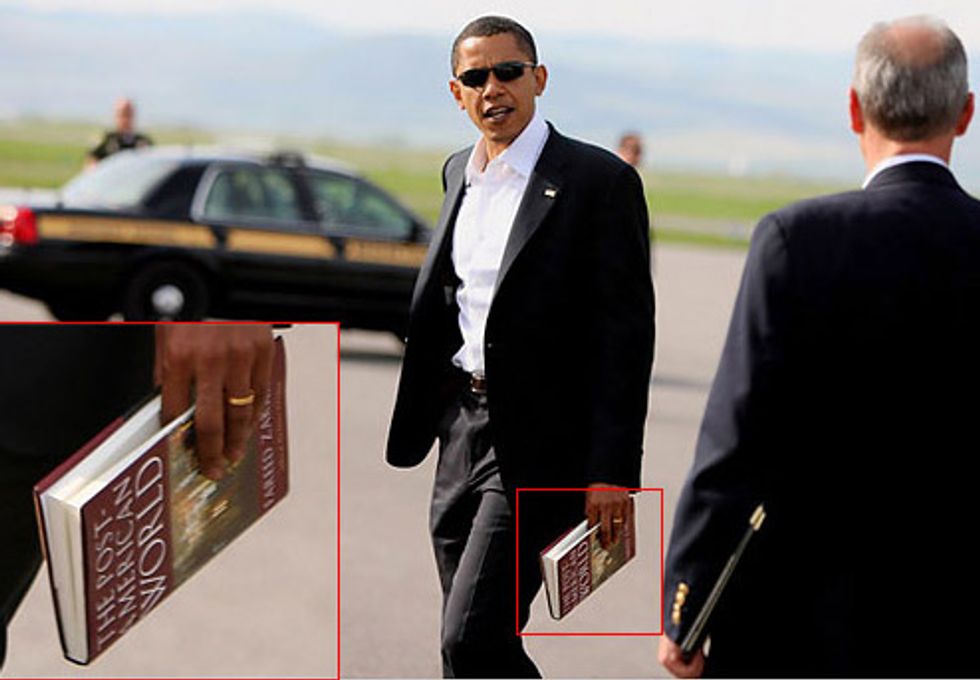 Wonkette operative "L" sends this tragic wingnut email with the explanation, "My cousin, who works for the STATE DEPARTMENT, sent this out." Oh man.

And why is this photograph with the special zoom-in "Wat's smarty-pants readin'?" close-up so damning? This is why:

Subject: Read this and weep

If each person sends this to a minimum of twenty people on their address list, in three days, all people in The United States of America would have the message. I believe this is one proposal that really should be passed around.

THIS WILL CURDLE YOUR BLOOD AND CURL YOUR HAIR

The name of the book Obama is reading is called:

The Post-American World, and it was written by a fellow Muslim.

"Post" American means the world After America ! Please forward this picture to everyone you know, conservative or liberal. We must expose Obama's radical ideas and his intent to bring down our beloved America !

The New Busy is not the old busy. Search, chat and e-mail from your inbox. Get started.

Fareed Zakaria is a Newsweek columnist, a Sunday CNN host, a naturalized American who lives in New York, and the former wine columnist for Slate. He writes what you might call "upper middlebrow" thumbsuckers and think pieces for the Wall Street Journal and the New Yorker, covering the same conventional-wisdom international business/politics scene that Thomas Friedman visits with his language bulldozer each week.

"This is not a book about the decline of America, but rather about the rise of everyone else." So begins Fareed Zakaria's important new work on the era we are now entering. Following on the success of his best-selling The Future of Freedom, Zakaria describes with equal prescience a world in which the United States will no longer dominate the global economy, orchestrate geopolitics, or overwhelm cultures. He sees the "rise of the rest"—the growth of countries like China, India, Brazil, Russia, and many others—as the great story of our time, and one that will reshape the world. The tallest buildings, biggest dams, largest-selling movies, and most advanced cell phones are all being built outside the United States. This economic growth is producing political confidence, national pride, and potentially international problems. How should the United States understand and thrive in this rapidly changing international climate? What does it mean to live in a truly global era? Zakaria answers these questions with his customary lucidity, insight, and imagination.

In other words, your district sales manager probably made you and the rest of your "team" read this goddamned thing a year ago, and at least it wasn't as bad as Hot, Flat and Crowded.OR: WHY IS BARRY HUSSEIN TRYING TO MAKE AMERICA THRIVE IN GAY MUSLIM CHINA WHY NOT JUST NUKE 'EM AGAIN?