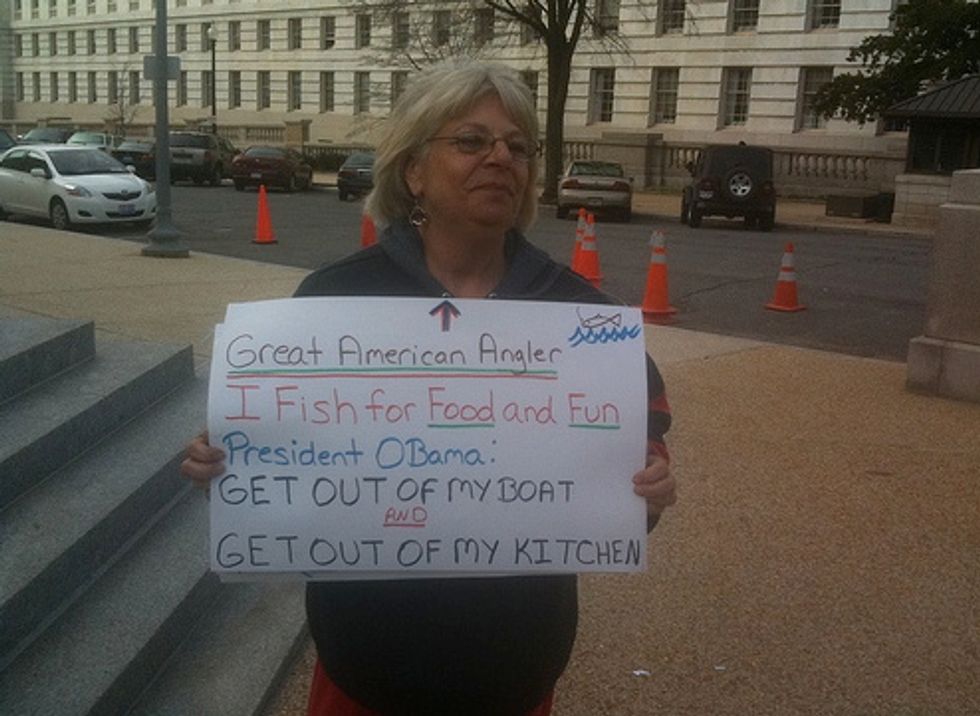 Dave Weigel of theWashington Independent's crazy person beat has taken any number of comical photos from today's Kill the Teabagger Rally, like this one, which is based on an actual thing. Wingnuts are furious that Obama will take away their right to fish on the local lake or pond, drinkin' gravy & beer with their buds Jim-Tom and Bumblecutter.

Someone on Big Government is leading the furious charge. He has fished many times in his life. And now Obama bin Biden will ruin that, for him:

That’s why when I hear crap that Obama and his “progressive” ilk want to ban fishing, it gets me … uh … how shall I put this … um… angry. Yeah, that’s a good word. Not only are they upending this nation on many different economical fronts but now they’re talking about the recreationally and economically disastrous move of banning fishing? What’s next? Are they going to ban apple pie? Blonde-haired girls? Chevrolet? No, they own Chevy now. What about baseball?

If you take away the "blonde-haired" girls, over whose heads will we smash our High Life bottles when anything bad at all happens?

(If you care about the truth, there was a government task force that will make recommendations for commercial fishing law, and the recommendation period has ended.)

GIT YOUR HANDS OFFA MAH FISHIN'? they are asking. Well, too late, a total ban on fishing (for wingnuts only) has been placed in the health care bill, sorry.