Wingnuts Tell Commie Pope To Get A Brain, Moran 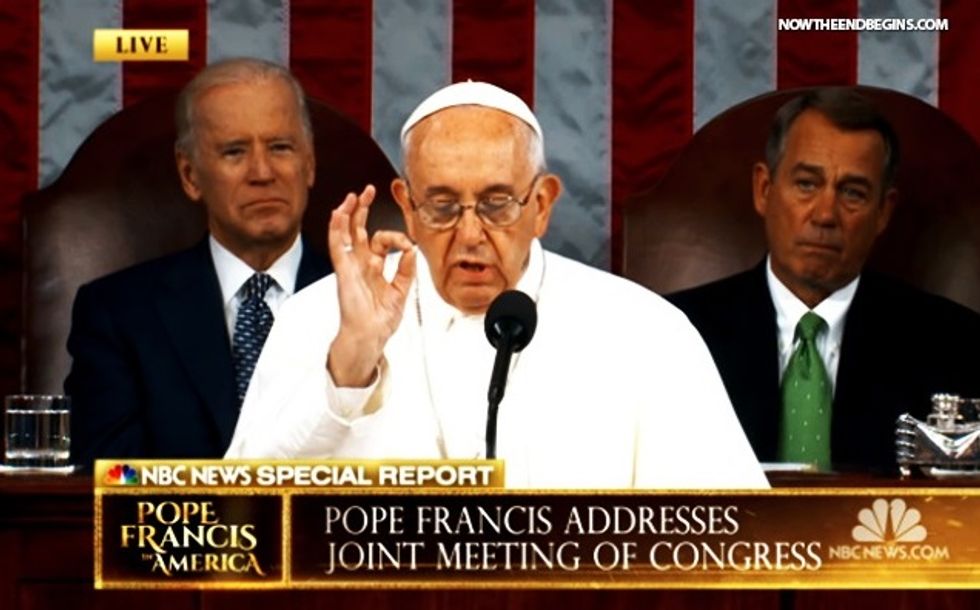 Well THAT explains a lot!

The rightwing freakout over Pope Francis and his betrayal of all good things (unfettered capitalism) continues, and it seems that his address to a joint meeting of Congress doesn't seem to have made them a lot happier, probably because he didn't follow Rep. Steve King's advice and lay off the divisive stuff about climate change and inequality. Let's see who he's gone and ticked off this time!

For one thing, they're plenty ticked that Francis pulled a bait and switch on them, pretending he was going to go all Samuel L. Jackson on abortion -- giving a nod to "our responsibility to protect and defend human life at every stage of its development" -- and then calling for the abolition of the death penalty.

He also joined in on the collective cheerleading for just how awesome things are for poor people here:

And while you liberals might have liked the pope's call for America and the world to take in Syrian refugees, Fox's Andrea Tantaros was quick to point out that Francis is just a big old hypocrite, too:

The real question, of course, is how many refugees could be housed in Andrea Tantaros's bikini? The second question is how she missed the memo that Francis actually ishousing a Syrian refugee family at the Vatican and has called on every Catholic parish in Europe to do the same.

Dead Breitbart Acolyte John Nolte pointed out that when it comes right down to it, liberals who might have applauded Francis are the biggest hypocrites EVAR:

Nolte was not at all impressed by such cheap symbolism; he prefers the cheap hyperbole instead. Why is Francis is refusing to fill the Vatican with scruffy refugees?

What would happen to Vatican City if it was to do what Francis is asking America to do?

I’m assuming Pope Francis could order such a thing tomorrow, and after the walls came down he could also choose to greet the wave of “pilgrims” with the “warmth of the love of Christ.”

Of course Pope Francis would never do such a thing because he knows what would happen: Vatican City would be no more, everyone’s security and well-being would be compromised, and the standard of living for close to a thousand residents would be destroyed. Chaos would completely destroy the home of St. Peter.

Well, fuck 'em all, then. They don't like how things are in Syria, they should get a gun and change it. Nolte was also unhappy about the pope's other skewed priorities:

As our own government gives hundreds of millions of dollars to Planned Parenthood, an organization that butchers millions of innocent babies and sells off their body parts, the Pope ignoring that issue ... in favor of the unicorn of Global Warming is an abomination.

And when I live in a country where the poor have air conditioning and cable bills and iPhones and an obesity problem, with all due respect, the Pope’s attacks on capitalism are anti-science. Nothing has done more to lift the poor out of true poverty than free enterprise.

Convicted felon Dinesh D'Souza warned the pope that he'd better be careful who he hangs out with, because liberals are such a disreputable bunch:

And progressive Catholics? They're the worst of all, and should probably be excommunicated.

Still, even though they may disagree with a lot of what the pope had to say, rightwingers also tried to find some ways to insist that, all in all, he's definitely on their side, which is the same as being on America's side. Jim Hoft, The Former Stupidest Man On the Internet, emphasized the two most pro-conservative things Francis said:

As usual, Hoft left the Heavy Hating to his readers, who had some thoughts on everything wrong with the Pope. In a post with the fairly neutral headline "Pope Francis Urges Congress to Reject 'Mindset of Hostility' to Immigrants," Hoft simply posted a video of that part of the speech and let the dogs come a-runnin':

The nice folks at conservablog Weasel Zippers pointed out that Ruth Bader Ginsburg hates the pope. Or the "pope's," we guess:

After Francis spoke to Congress, he went to join some 300 homeless people having lunch at Catholic Charities in DC, where he recapped the story of the Nativity, and pointed out that "the Son of God came into this world as a homeless person. The Son of God knew what it was to be a homeless person, what it was to start life without a roof over his head." He noted that Joseph must have asked, "Why is my family homeless?" and that the richest nations on earth must also ask that question. John Nolte wasn't having any of that nonsense:

Seems to us there was also a guy named Reagan who was big on de-institutionalization, and never followed through on funding the promised community mental health programs that were supposed to go along with it. But nahh, it was all the ACLU and their stupid insistence on "rights," which can only be secured with firearms.

Finally, for larffs, we have some "thoughts" from way out on the fringe: There's Alex Jones, who explained Wednesday that if the "slimebag" Pope gets his way on climate change, we'll all be enslaved, and "a billion people will starve to death in the next ten years."

Funny, you'd think that Alex Jones would be OK with that, as long as they're mostly Muslims.

And then there are the wackaloons who make Jones look pretty calm by comparison. We chanced on an important bulletin from some End-Times crazies at "Now The End Begins," which revealed that Francis opened his address to Congress with "Illuminati Hand Signs":

Take a look at the photo below [reprinted up top, with caption -- Dok Z] and see the Pope starting his remarks by giving the Satanic Illuminati “OK” sign, and you’ll know why he didn’t bother to pray to God before speaking, he was already talking with his god. And you wonder why we call him the False Prophet?

Seriously, where is the justice? Why hasn't Congress invited any snake-handlers to address a joint meeting? Totally biased on their part, and clearly another sign that the End is Nigh. The blogger was also pretty pissed off that the pope buys all that bullshit about "caring for your neighbor" that somehow got thrown into the Bible in addition to the really important stuff in Leviticus:

At the 24:00 mark, he started promoting illegal immigration, and chastising America for not letting more illegals in over our borders. He called it a sin to not allow more illegals in, and that we should “reject a mindset of hostility” towards them. What part of the word “illegal” does the Pope not grasp? At this point he invoked the “golden rule” and got the obligatory standing ovation. It’s now the 30:00 mark, and I am still semi-patiently waiting for the “vicar of Christ” to give Jesus a shout out. Crickets., nothing but crickets.

That monster. You'd almost think that he was trying to talk about doing things in the world instead of trying to proselytize, and God knows Jesus never actually gave a damn how people treated each other, as long as they didn't fuck the wrong way, love the wrong people, or show mercy to foreigners.