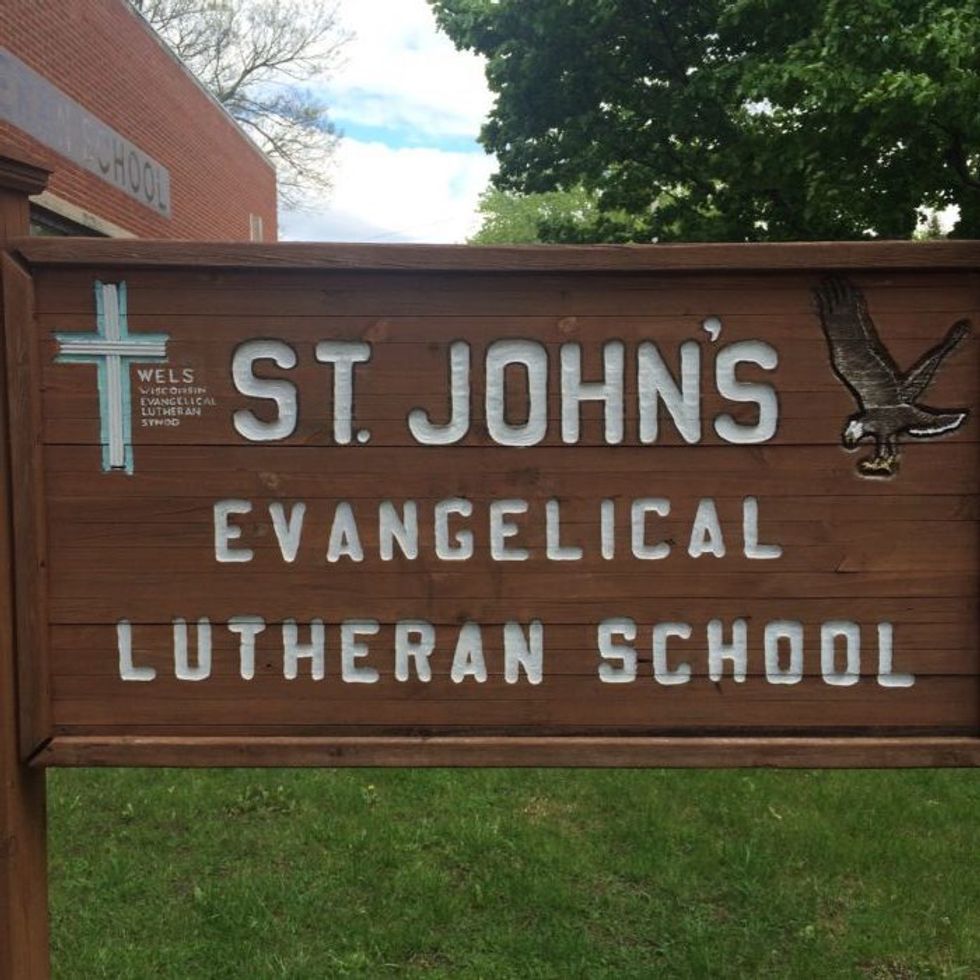 St. John's Lutheran school in Baraboo, Wisconsin, has found itself in a bit of a bind! You see, although it is a parochial school, run by a church, it receives federal funding for its free lunch and transportation programs through No Child Left Behind. Even though, AS WE ALL KNOW, federal funding for things that help poor people is bad and we should leave that stuff to churches.

The problem, though, is that the school also deeply desires to discriminate against gay and transgender students. Because how fun would that be, right? Unfortunately, the federal government wants to rain on its happy bigot parade by requiring St. John's to admit these "sinful" students (ages 4-13) if it'd like to keep getting all that money. Because unfortunately, that money doesn't just come from cisgender, heterosexual Lutherans, but from everybody. Even the parents of "sinful" five-year-olds.

However, the school has figured out a way around all of that by saying it will allow these "sinful children" to be admitted into the school, but that it will be "disciplining" them for said sinful behavior once they are enrolled. In order to discourage them from enrolling in the first place.

“If we cannot legally refuse students who are struggling with homosexuality or gender identification, we must maintain our right to hold to the truths of God’s Word,” St. John’s Principal Craig Breitkreutz wrote in a letter to parents this February. “In other words, although we do not have the right to refuse admittance to people choosing an outwardly sinful lifestyle, we do maintain the right to discipline and dismiss students for these choices."

As a part of this genius plan, St. John's is requiring parents to submit their children's birth certificates, to make sure their gender expression is in perfect alignment with the gender the doctor said they were when they were born.

Breitkreutz told the Baraboo News Republic that he has not yet had to discipline or expel a student yet for being gay or transgender, but that if they did come across a child with such "sinful" tendencies, they would patiently try to share the word of God with them. But, you know, if the kids continued being "sinful," they could be expelled for violating school rules.

“So rather than us trying to weed them out," St. John’s Pastor Nick Maglietto explained, It’s more letting them know where we’re coming from up front and making their choice based on whether this would be an environment for their child.” He says the school isn't trying to "exclude" anyone, it just wants gay and trans students to know that they are "not welcome" there.

In other news, my brain just broke from trying to figure out the difference between excluding someone and telling them they are not welcome.

In response to this letter, the Freedom From Religion Foundation has filed a complaint with the USDA, which is in charge of the free lunch program, and has launched an investigation into whether or not the school has disqualified itself from the program. Breitkreutz says that although that program and the transportation program help a lot of students, they would be willing to forego them if it meant keeping gay and trans students OUT. Because who even needs food when your are filled to the brim with the self-satisfaction of knowing you are pleasing your lord by treating your neighbor like garbage, just as he commanded.