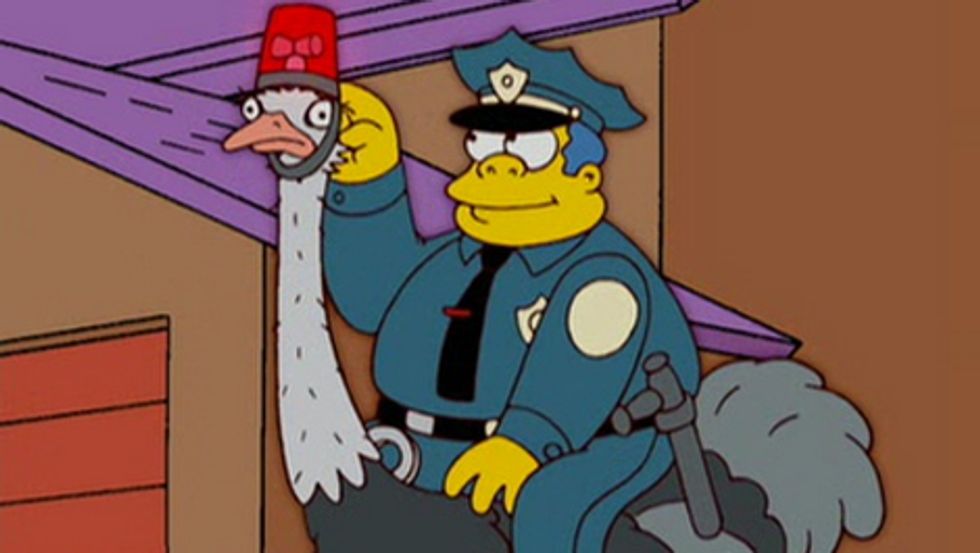 We've said it before: there's no politics dirtier than small-town politics. More massively evil, more expensive, sure, but for pure spite and awfulness it's pretty hard to beat small-town fights, at least outside of a university English department. Which brings us to thesaga of Police Chief Timothy Kelemen of the town of Campbell, Wisconsin, who was charged Thursday with creating fake online accounts for Obamacare and gay porn in the name of a local Tea Party leader he'd been feuding with since last August. Needless to say, this was very, very bad and we would never ever recommend such behavior AT ALL, not ever.

The foofaraw started last summer, when Gregory Luce and fellow teabaggers held protests on a pedestrian bridge over an interstate, as was the fashion in those days -- and to keep up with tea party chic, that included hanging banners off the bridge's fencing. Reuters doesn't specify, but we'll bet "Impeach Obama" was in there somewhere, and probably something misspelled as well. Chief Kelemen argued in town council meetings that the signs were distracting to drivers, and convinced the board to pass an ordinance banning signs on overpasses, so then Luce and his intrepid baggers stood on the overpass "wearing T-shirts that spelled out 'Impeach Obama,'” which we'll admit is a creative response. Another protester was later arrested for waving an American flag from the overpass.

The other creative response is that, according to Kelemen, the police department was targeted with between 300 and 400 phone calls a day -- again, Reuters is damnably short on details here, but we're guessing they weren't to report lost pets. Maybe they called to complain that their country had been stolen. The Minneapolis Star-Tribune says that Luce "[urged] supporters across the country to bombard the police department with harassing phone calls and threats."

“I’m not denying I did it … I didn’t think it was that big of a deal,” Kelemen said in a video posted on the La Crosse Tea Party website, showing an interview with investigators in May.

Kelemen has been charged with "misdemeanor unlawful use of computerized communication systems" and suspended while the case moves forward.

While Yr Wonkette certainly appreciates Chief Kelemen's frustration with the harassment, we actually have to agree with the teabaggers on this one -- the town law looks like it was targeted at them specifically, and that's a First Amendment no-no, and while harassing phone calls are awful, identity theft and using somebody else's information to set up harassing accounts is also not a nice thing, even if it appeals to the snotty 12-year-old in many of us. We also have a sneaking feeling that all of this ultimately has less to do with arguments over national politics than with the tendency of a small-town cop who couldn't stand it when someone didn't respect his authoriteh. For all we know, there's a longstanding dispute about borrowed power tools in there, too. In any case we'd like to commend both Luce and Kelemen for doing their part to bury the pernicious myth of Wisconsin Nice.