On @CBSThisMorning: Inspired by Selma march, teens walking 50 MILES to Paul Ryan’s hometown.
Their chant: “Paul Ryan, can you hear us? Were screaming. Were dying. Were crying for some gun reform...if you don’t listen Paul, your reign will surely fall.” @CBSNews @50milesmore pic.twitter.com/PLHLZhe975

After Saturday's March For Our Lives in Washington DC (and across the country), a group of about 50 students in Wisconsin started some truly serious marching for their -- and everyone's -- lives on Sunday, walking the roughly 50 miles from Madison to Paul Ryan's hometown in Janesville, Wisconsin. They'll be arriving today (in fact, they arrived while we were writing this) for a rally in Janesville's Traxler Park at noon. So, no, Paul Ryan won't actually be able to yell at them to get off his lawn (and he's actually out of the country, but that's not the point). They're calling the march, appropriately enough, "A March For Our Lives: 50 Miles More."

Along the way, the kids slept in high school gyms and other pre-arranged locations, and after each mile of marching, they stopped to remember one of the many kids who have died in acts of gun violence. Unfortunately, there was no shortage of names to read. The final child they honored, as they arrived at the park, was Adam Ponzer, aged six -- the youngest of the 20 children shot and killed with an AR-15 at Sandy Hook.

These kids have grown up with social media, and they have a very good sense of how to put their march in historical context. The timing isn't bad, either: Their march started 53 years to the day after the 1965 voting rights march from Selma to Montgomery ended: 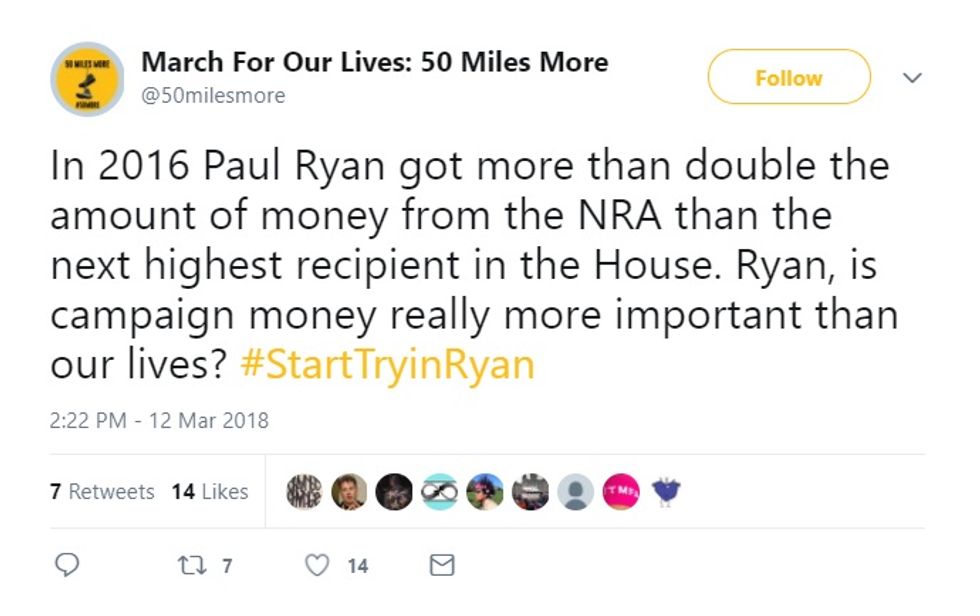 And yes, that claim checks out -- the second-biggest House recipient of funding, interestingly, was Ryan Zinke, who has since left the House to do the NRA's bidding at the Department of Interior, where he repurposed a conservation council to promote "shooting sports" and has made helping out big-game hunters a priority. NRA money keeps on influencing politicians even after they've left Congress.

Both Democrats seeking the nomination to run against Paul have Twote in support of the teens; here's Cathy Myers, who has also been retweeting some of the kids' messages:

Wisconsin students are marching 50 miles from Madison to Janesville because they refuse to be ignored by @SpeakerRyan, who has taken more money from the gun lobby than any US Representative past or present.#50More #NeverAgain #WeWillNotBeIgnored https://t.co/UehSbqSV1i

Randy Bryce, the Democrat with the Mustache of Power was very supportive of the kids' aims, too: 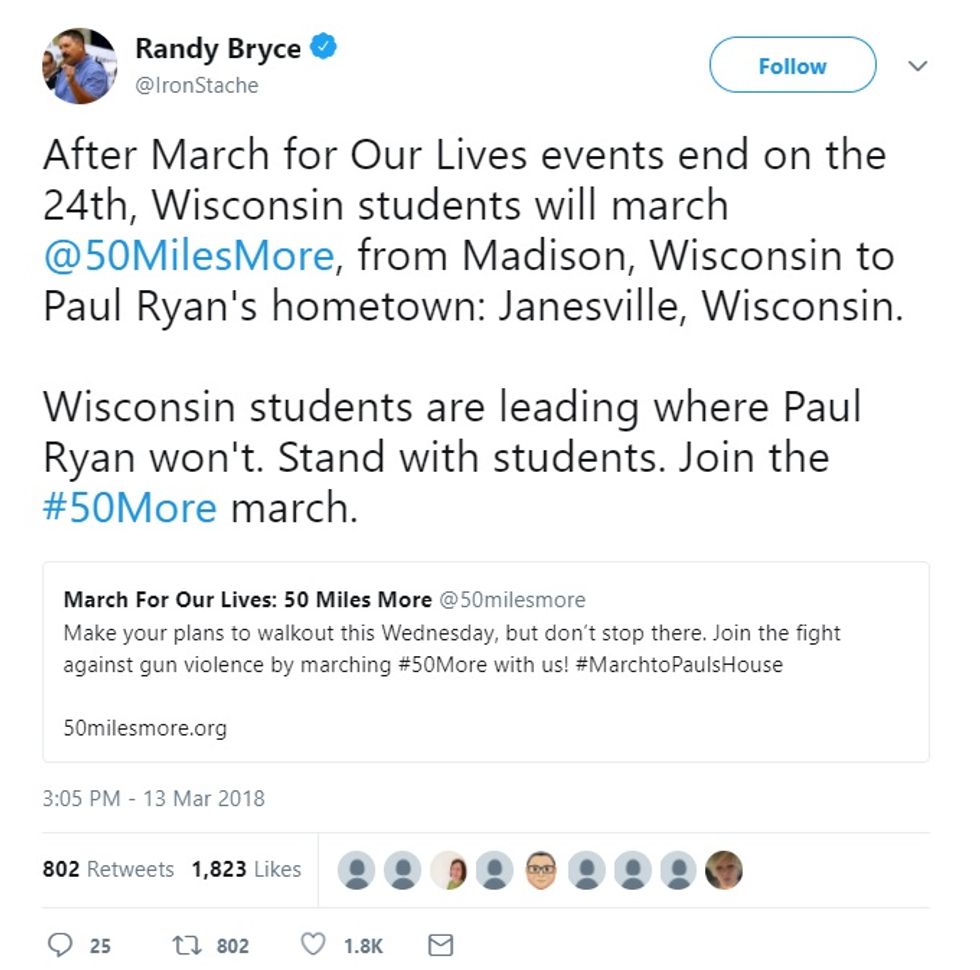 The congressman respects those expressing their views. The House recently enacted new laws to keep children safe without infringing on constitutional rights.

Presumably that would be the "Fix NICS" bill included with the recent omnibus spending bill; while it's a good first step, that law only provides very small improvements to the national instant background check system for gun purchases. Slightly better than thoughts and prayers, but hardly any kind of courageous action.

The organizers of the march hope that other student groups across the country will follow up with their own marches to the hometowns of their representatives and senators. Get ready for Fox News to complain this is just more of that damn "exercise" that Michelle Obama tried to force on American young people.