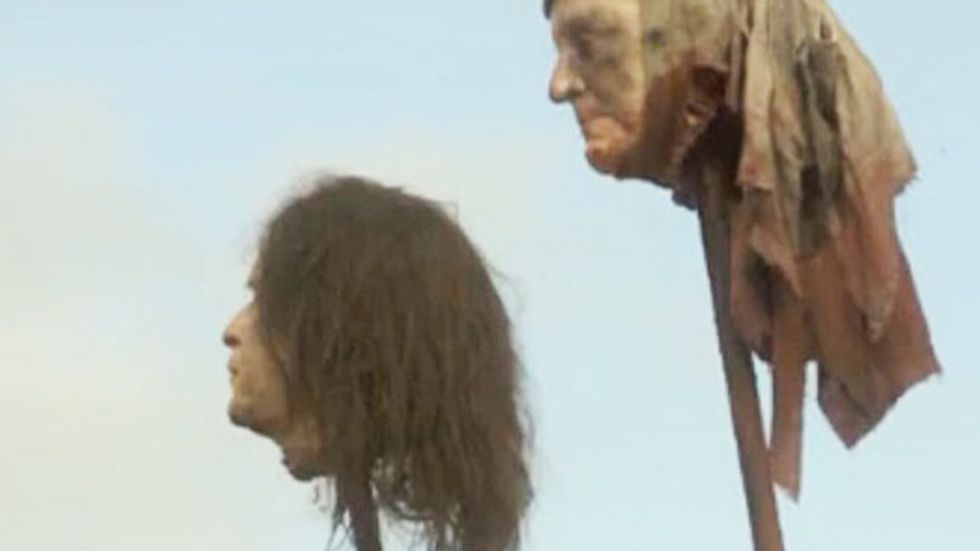 Remember how it was INCREDIBLY DISRESPECTFUL when some British filmmakers made a movie that practically nobody saw, imagining the assassination of George W. Bush?

Rush Limbaugh called the director of Death of a President a "sicko," Congresscritic Peter King gave it two thumbs down, called it "absolutely disgraceful," and warned "This is a dangerous world," and fretted that the fake documentary "could incite real violence." And liberals everywhere were shameful, just shameful, for their failure to condemn this atrocity. In fact, they supposedly loved it, although it managed to gross less than a million dollars worldwide. And then there was that INCREDIBLY DISRESPECTFUL half-second shot of George W. Bush's head on a pike in Game of Thrones, the result, the studio said, of using whatever prosthetic heads the studio had on hand for a shot of several heads on pikes. Fox News called it "Outrageous," Freepers melted down over it, and probably somebody on Twitter complained that Bill Clinton's head had been cropped out of the scene. HBO apologized profusely and edited the shot out of future DVD releases. Message is clear: it is incredibly rude and outrageous to depict the killing of a sitting (or former) President of the United States.

Unless, of course, you're the movie reviewer for WorldNetDaily and somebody makes a movie showing Barack Obama's head exploding like something out of Scanners. That's not sick, that's funny!

Here's "Molotov Mitchell's" review of the new action thriller Kingsman: The Secret Service, starring Samuel L. Jackson and Colin Firth. The video has a lot of cool visual effects oozing all over it so that millennials will like WND, we guess.

What makes this movie awesome, says Mitchell, is that it's the very first Hollywood movie to depict Barack Obama as the bad guy that we all know he is. Samuel Jackson is an environmentalist radical supervillain who tries to end global warming by killing off millions of people, using cell phone chips that blow people's heads off. Only, in a surprise twist, his fiendish plot, approved by Barack Obama and other nefarious world leaders, goes sideways, and a chip in Obama's head goes boom too! And somehow, Ronald Reagan's Strategic Defense Initiative, which was never actually built, saves the day.

Molotov's pretty psyched: "What made this film really special is that it was the first Hollywood film to portray Barack Obama in a bad light." Even better, it's also "the first Hollywood film to kill Barack Obama, on-screen no less." Molotov is especially jazzed by the head-sploding: "From behind, we see Obama's head pop like a piñata to the triumphant sounds of 'Ode to Joy.' He tries to kill America, and dies for it." Mitchell gives the movie a solid A- grade, in part because other than The Interview, this is the only film this year where you get to see a real-life dictator's head blow up."

We should make it absolutely clear that we aren't especially outraged by the premise here -- it sounds like a conspiracy theorist's dumb wet dream (or possibly, like the movie version of Starship Troopers, a satire that WND readers would miss? Who can tell anymore?). And no, you don't need to boycott anybody. But it's awfully good to know that it's finally OK for movies to occasionally kill a president, as long as it's someone other than George W. Bush. Finally, freedom has returned to the film industry!