Wonkette Book Club: We Are All Gay For Rachel Maddow's Book 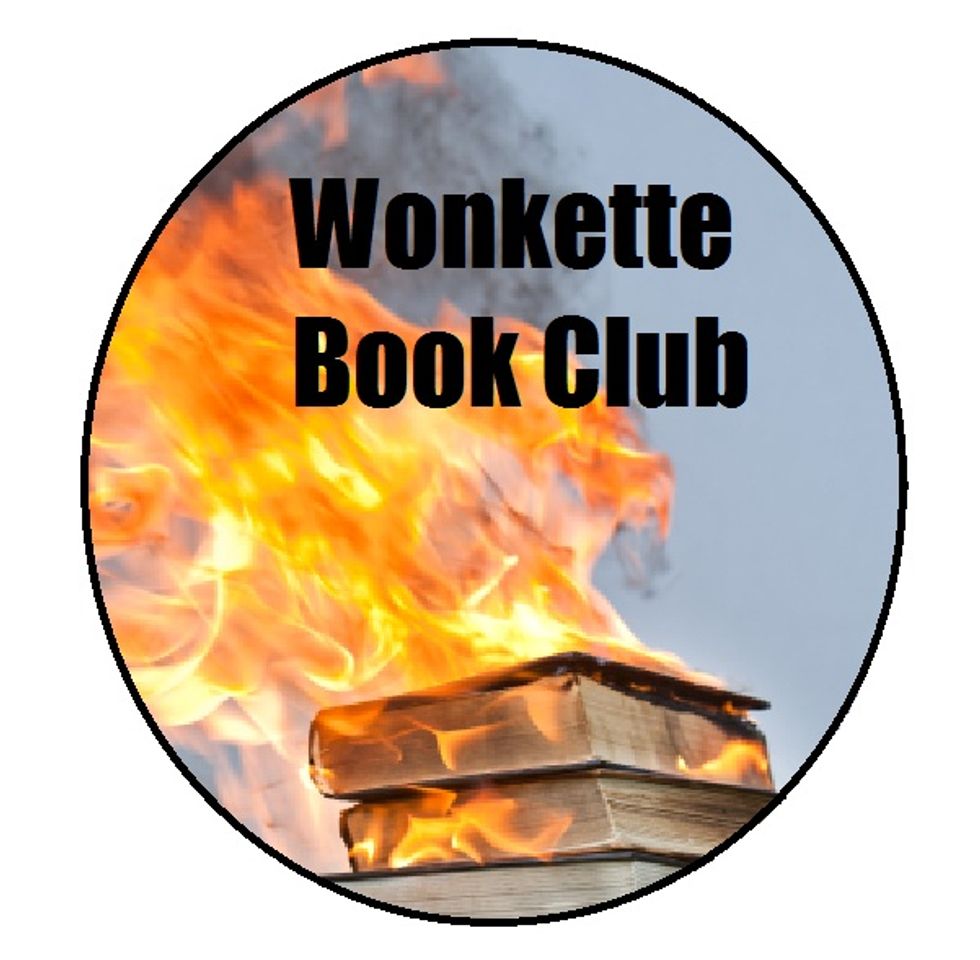 One nice thing about writing for Yr Wonkette is that we don't even have to pretend to hide our raging nerd-crush on Rachel Maddow, or pretend that we don't just melt in fannish excitement when she acknowledges the existence of our little mommyblog -- she's called Wonkette "profane and excellent" on air...twice! (Squeee!) So we also won't pretend that we weren't already predisposed to like her book Drift: The Unmooring of American Military Power, published last year but newly released in paperback. But unlike so many books by TV/political people -- even pretty good ones, like Al Franken's Lies And the Lying Liars Who Tell Them -- Drift isn't just a series of riffs that make some excellent points while giving you some larffs. It's a sustained argument about what's gone haywire in America's use of military power, with the kind of keen dot-connecting that works so well for Maddow in her on-air commentaries. And it starts with a dedication that you know is from the heart: “To former vice president Dick Cheney. Oh, please let me interview you.”

Maddow's case is pretty simple: Since at least the 1960s, American military power has become increasingly disconnected from the American electorate, not because of a dark conspiracy but through a series of definite decisions by presidents, mostly due to the desire of the executive branch to use military force without having to be constrained by that bothersome clause in the Constitution that gives Congress the power to declare war.

Lyndon Johnson comes in for a fair share of the blame, not merely for ginning up the Gulf of Tonkin not-quite-an-event, but even more for consciously not calling up the National Guard and Reserves. As Maddow puts it, “he didn’t want to get Congress and the rest of the country all het up and asking too many questions," especially once the reserve forces morphed into a place where young men could go to avoid Vietnam. (Surprisingly, she does not mention a certain Texas Air Guard pilot in this section, though he gets plenty of attention in later chapters.)

The post-Vietnam Congress attempted to reign in presidential military adventures with the War Powers Act, but that has turned out to be less of an obstacle than a speed bump to unilateral presidential war-making; much of Drift is a record of how Presidents simply disregarded the law, preferring the "Commander in Chief" part of the Constitution to that stuff about the power to declare war being vested in Congress. The very idea of a formal declaration of war seems as antiquated as other artifacts from December 8 and 11 of 1941.

Maddow is especially on target in her critique of Ronald Reagan's near obsession with keeping Congress away from his military schemes. The Grenada fiasco is a touchstone; to avoid potential leaks that might bring Congressional "interference," the Reagan team operated in a Cone of Silence -- with infamous results:

At least one member of the Air Force planning team suspected that nobody had requested pre-invasion intelligence on Grenada from the National Security Agency, which monitored international phone calls and radio traffic [...out of fear] that operatives at the NSA, the most secretive agency in government, would leak. And apparently nobody in the chain of command had asked the Defense Mapping Agency for detailed tactical maps of Grenada, which is why planning teams were occasionally working with maps dating from 1895, and commanders on the ground ended up depending on fold-out tourist maps like “Grenada: The Isle of Spice."

Reagan also surrounded himself with people who shared his vision that the fight against communist tyranny was an Executive Branch job; one anecdote recounts Secretary of State Alexander Haig apparently forgetting (again) what exactly his job was, suggesting that he could deliver Reagan

a US military attack on Cuba. “Give me the word," the nation’s chief of diplomacy said to the new president in March 1981, "and I’ll turn that island into a fucking parking lot." One of Reagan’s most loyal and longtime aides, Mike Deaver, later said that Haig’s pronouncement had “scared the shit out of me" and had also shaken the boss. Deaver asked Chief of Staff James Baker to make certain Haig was never again in a room alone with the president.

And then of course there's Iran-Contra, where Team Reagan decided that presidential authority trumped whatever silly little laws Congress might pass. For instance, if the Boland Amendment forbade the CIA from running guns and money to the Contras, then why not set up a private corporation, run by the National Security Council, to do exactly the same thing? After all, testified Attorney General Edwin Meese, the law only applied to the CIA. Once the scheme fell apart, an incredulous Sen. Dan Inouye asked Meese during the congressional hearings:

INOUYE: Then in other words from what you’re telling me, employees of the Department of Agriculture could have done the same thing without evading the law? To carry out covert activities?

MEESE: I think that it’s entirely possible that as the -- that as the law is written here where it says, ‘funds available to the Central Intelligence Agency, the Department of Defense or any other agency or entity of the United States involved in intelligence activities may be obligated and expended only as authorized in specific sections.’ Now, as I read that, as I said earlier, a strong case can be made I think that that does not apply to the Agriculture Department, that it doesn’t apply to Health and Human Services, and a number of other entities which are not involved in intelligence activities.

To which Maddow can only add, "Ta-da!" Meese's approach, she says, was “‘Fuck Congress,’ only in Latin.” And, of course, there were those in Congress who shared that opinion, such as then- Rep. Dick Cheney, who sincerely believed that nothing in the Constidtution placed any limits on a president's power to do whatever he wanted in foreign affairs. Maddow's discussion of the Cheney doctrine (is that an actual capital-D Doctrine?) is worth quoting in full:

And who won this argument? The answer is kind of surprising, but sadly obvious today, when we find ourselves in a succession of indefinite hot wars the country does not really want.

Remember the words of James Madison: "The Constitution supposes, what the History of all Governments demonstrates, that the Executive is the branch of power most interested in war, and most prone to it. It has accordingly with studied care vested the question of war in the Legislature.” The "studied care" Madison describes behind that "vesting" has not been matched by any equal and opposite studied care in recent decades, as we’ve divested that same power. It’s not a conspiracy. Rational political actors, acting rationally to achieve rational (if sometimes dumb) political goals, have attacked and undermined our constitutional inheritance from men like Madison. For the most part, though, they’ve not done it to fundamentally alter the country’s course but just to get around understandably frustrating impediments to their political goals. The ropes we had used to lash down presidential war-making capacity, bindings that by design made it hard for an American president to use military force without the nation’s full and considered buy-in, have been hacked at with very little appreciation about why they were put there in the first place.

And we've all seen how well that's worked out.

On top of this tendency to elude Congressional limits, we also have the rise -- again, without a lot of discussion -- of private military contractors, first as supposedly more-efficient replacements for having the military cook its own food and repair its own helicopters, but eventually as an adjunct to actual war-fighting in Iraq and Afghanistan. Not a conspiracy, but expedient, and more importantly, not something that Congress or ordinary Americans are likely to get too worked up about, since the private operators are explicitly not our brave sons and daughters wearing their nation's uniform. Fewer boots on the ground, and we can pretend that we're actually saving money this way, because it's a different budget slot -- even if there has never been any serious side-by-side examination of how much it costs the Army or Brown & Root to build barracks in, say, Serbia. Somehow, Maddow notes, Brown & Root did manage to involve enough layers of management to "turn a $14 sheet of plywood into an $86 sheet of plywood." And of course since the private contractors were not part of the military, they also managed to operate outside of military law -- or perhaps outside of any law, which gave us the spectacle of DynCorp employees buying 13 year old sex slaves from the Serbian mafia, or Blackwater guards shooting up civilians in Baghdad. More recently, we've also had the rise of the CIA as a military force in its own right, operating the drone program in Afghanistan and Yemen with hardly a hint of Congressional oversight.

Yet in the midst of all these costly foreign adventures, we're also managing to let little things like military infrastructure fall apart -- literally. Aging nuclear warheads can't be maintained because the people who designed them are all retired..."And nobody had bothered to write anything down!" We still have Reagan's nuclear arsenal, aimed at Russia, but nobody's making any serious moves to reduce any of it. Pity is, since all the promotions are going to people doing the fighting in our unwanted foreign wars, a lot of the people in the missile silos are not exactly top-notch.

Maddow closes with a brief discussion of what we might do about all this. Spoiler alert: She wants us to return to the Madisonian notion that war needs to be difficult to get into. Put it on the budget, get rid of the secret and private warriors, stop letting policy be set by think tanks, and make the Guard and Reserve a true reserve force of citizen-soldiers, not a full-time force that is "reserve" in name only. And above all -- and the toughest development to roll back -- let's see what we can do to cut back the ridiculous overreach of executive power in war-making.

She doesn't provide a roadmap for how to get there, unfortunately. Maybe we can get something from the Grenada Tourism Bureau.