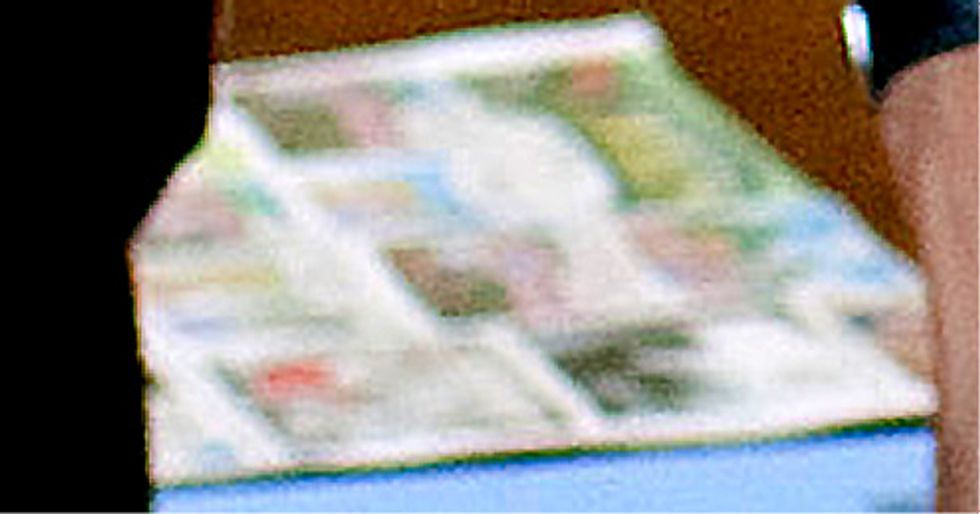 Oh just another White House Flickr picture of Barack Obama desecrating the Oval Office by not wearing his suit jacket, same old scene, mysterious white guy on the couch overseeing everything, nothing to see here, right? WRONG. Wonkette operative "Lily E." instructs us to look just to the left of Obama's wristwatch. No, not at his crotch, you pervs, but on the desk there. What is that?

Now the picture becomes clearer. Or bigger, actually. Because we zoomed in, which makes the picture bigger, somehow. And now we see this degenerate San Francisco radical maybe has the funnies on his desk? In our White House?

Yep, definitely the comics. We thought Muslims all hated the cartoons! But what cartoon is this? We don't know at all. Comics Curmudgeon, do you see the Muslin Crescent we're shining over the coal smoke of Baltimore? That's your signal to get to work, decipher this. Is Obama reading Zits? Mutts? Pluggers? ("Pluggers' health care: Shoot Obama with old shotgun, then shoot self. -- Thanks to Wayne in Shitstain, Texas.")