Wonkette Investigates: What Is Up With Chanel Rion, Traditional Dinner-Making Fiancée Of Courtland Sykes? 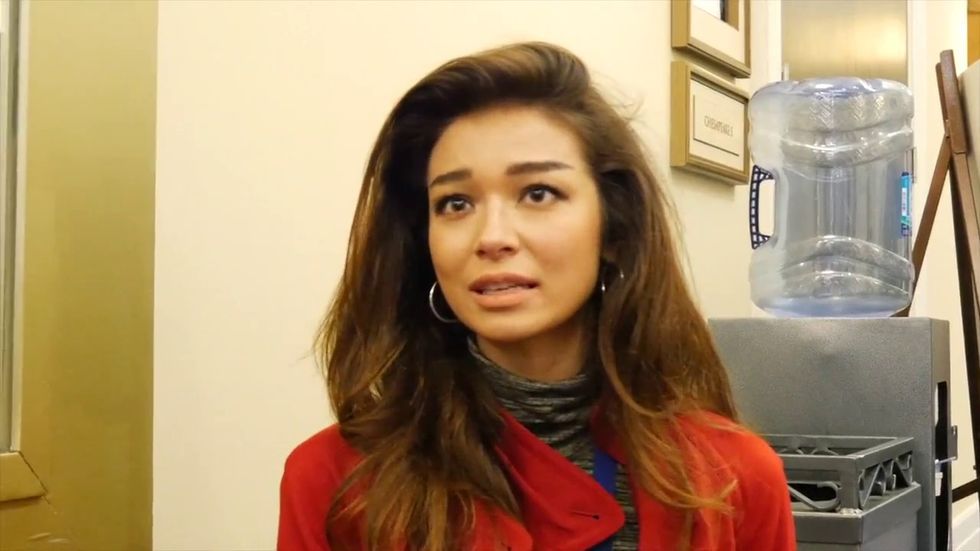 This week, we told you all about Courtland Sykes, the Missouri Senate hopeful who believes in a woman's right to make him dinner, and is pretty sure he knows more about women's rights than all you she-devil manophobic harpies out there!

But who is the woman who makes Courtland Sykes his dinners promptly at 6pm every night? It is Chanel Rion, a woman who also hates them she-devil manophobic harpies, and claims to be a lot of things she might not actually be. Put your deerstalkers on, Wonkers and let's get to the bottom of this.

Here is the description of Chanel on Courtland Sykes' official senate website:

Chanel Rion is an American author, political illustrator and commentator, who was born in Texas and grew up in Missouri, and overseas—in France and South Korea.

Chanel has become widely known as the best political illustrator in the country for constitutional conservative and anti-leftist causes and as President Trump’s most stalwart graphic warrior against leftism.

Chanel is also the developer, author, and illustrator of the first three volumes of her traditional girl’s mystery series. Chanel’s mission is to promote the spirit of the traditional family, and the self-reliance, ingenuity, independence, and strength of American girls who believe in traditional homes, in conservative values, in having faith, and in having lives and futures that encourage families to succeed at home.

Chanel is engaged to Courtland Sykes, Republican U.S. Senate candidate for Missouri. They met at what was a CIA recruiting event at Harvard.

Chanel also has an extensive "about me" section on her own site, in which she discusses how her family fled America after Clinton was elected -- fearing communism -- in order to go to South Korea, and then to France. The reason they went to France, apparently, was so that the family could see how bad socialism really was.

What started this peculiar journey for us was the candidacy of William Clinton in 1996. That year, Clinton ran for reelection against dad's old friend and onetime political mentor, Bob Dole. Clinton was the last straw, so dad picked up stakes and moved us out of the country. I think he wanted us to see what a debauched idea socialism was and that socialism was what the Clintons stood for. He wanted us to see what socialism did in the real world—how it destroyed people and human happiness in practice.

Chanel was pretty sure that all her first grade classmates were total commies, even though they didn't talk about politics.

After South Korea, Chanel and her family moved into an ancient strap and gear crossed grain-grinding stone watermill in France, a three-story affair, where farmers in oxcarts and pickups actually brought grain by for grinding. "When winter came," Chanel recalls, "the miller quit and we moved to an unheated stone maison in the hills of a communist farming village in the mountain region of France where we bought goat cheese and baguettes every day from a monastery on the way home from school and where dad again swore we were never returning to the U.S."

Chanel spent her first grade year not speaking English at school where she heard not a word about politics from her presumably communistic first-grade French classmates.

Well, that all certainly makes tons of sense.

A large part of the second half of her very long About Me section is dedicated to discussing her career as a political illustrator:

Chanel has become widely known as the best political illustrator in the country for constitutional conservative and anti-leftist causes and as President Trump's most talented and stalwart graphic warrior against leftism.

Chanel has been frequently described as one of Hillary Clinton's "worst nightmares" because she stands as a fierce foe of anything Clinton, of everything Obama, and as a total and unrelenting enemy of academic left-liberalism and political correctness anywhere—she's out to stamp it out and when Chanel skewers the enemy, it can be a powerful thrust—sometimes shocking, always articulate—linguistic and graphic gems that strikes the heart of the insanity of the political left.

Another conservative broadcaster adds, "Nobody captures the enemy graphically like Chanel. People are wearing her T-Shirts, putting up posters of her political art on walls all over world—hell, she even does Merkle and May—where it's almost illegal to draw them in Germany and England."

That's weird! I thought to myself, looking over her political cartoons -- I am really familiar with most right-wing bullshit, and I have never seen any of these before. Even the really weird one about how Barbra Streisand is very fat. That would for sure stick in my memory, seeing as how I do not forget Barbra Streisand-related things.

I did a Google image search for every image of one of Chanel's drawings I could find, and to a one, the only source for any of them were on either her own website or Twitter, or on Courtland Sykes Twitter. I could not locate any t-shirts or posters for sale, on her website or anywhere else. Also it sure seems suspicious that "conservative broadcaster" would be anonymous in a situation like this.

Oh, and I feel fairly confident in saying that Hillary Clinton has no damned idea who she even is.

The "About Me" section also goes into detail about that "traditional girls" mystery books series that she is supposed to have authored three of so far.

Chanel's "Mystery by Design" series for girls Available January 1 stands apart from the gender-hostile, Hollywood "rip and hate" spirit of radical feminism that has brought so much coldness, pain, failure and disappointment to so many young women whose lives radical feminism has twisted and irreparably ruined with its toxic and confused mental stew of pointless competition, manophobia, hatred, gender-confusion and blame that radical feminism is and has always been about. She rejects it outright and wants as many girls as she can reach to reject it too.

Well! This sure seems fascinating! And also exactly like everything her fiancée said about us monophonic feminists the other day. I wonder what a mystery book series for traditional girls would look like? Would they be on the case of the missing butter churn or wandering womb?

Too bad I can't know -- because I can find absolutely no record of these books existing outside of her website.

Yet somehow, despite only having been released January 1st, and despite the fact that there is absolutely no evidence that they actually exist, they are apparently being used as "language trainers" in other countries. Weird!

Chanel's books, each of which contain over 1,000 word vocabulary enhancing helps are being offered as language trainers in grim and dedicated rote English-learning venues including China and South Korea.

She also says that she met her husband-to-be, Courtland Sykes, at a CIA recruiting event.

According to her LinkedIn account (which I can see has been updated to include the fact that she is writing an "adventure" series for girls), Chanel has had two jobs for one year each. Managing Editor and Design Editor for Literary Laundry LLC in 2013, and the Art Director and Principal Illustrator for something called Cloverstone Publishing in 2014. I looked up this "Cloverstone Publishing" and on the main page of the site there is a video of someone named Channing Rion. Who looks a heck of a lot like Chanel Rion.

Would this explain why I was unable to find any information about Chanel Rion prior to the 2017 election? Cloverstone Publishing, by the way, appears to have been run entirely by Rion herself, and only published one book ever. It is not one of her mystery series of books.

Channing also has her own site, and her own about me section, which neglects to mention anything about them monophonic she-devil feminists.

The name-changing thing wouldn't be a big deal (although, for non-drag queens, changing your name to Chanel is infinitely worse than being named that by your parents!) if literally anything else about her tracked. The only thing that seems definitely true about her is that she went to Harvard and was a Republican while she was there.

Clearly, something is up.

Correction, 1/28 10:30am: As several people have mentioned in the comments, Channing is not Chanel's former name, but her sister's name. According to her father, anyway -- and we're still not 100% sure we believe him. This could all be a ruse of some kind. She did, however, change her last name from Ryann to Rion. It also turns out that she did not go to actual Harvard, but to the Harvard extension school.