Wonkette Live Blog III: And We Choked Their Rivers With Our Dead 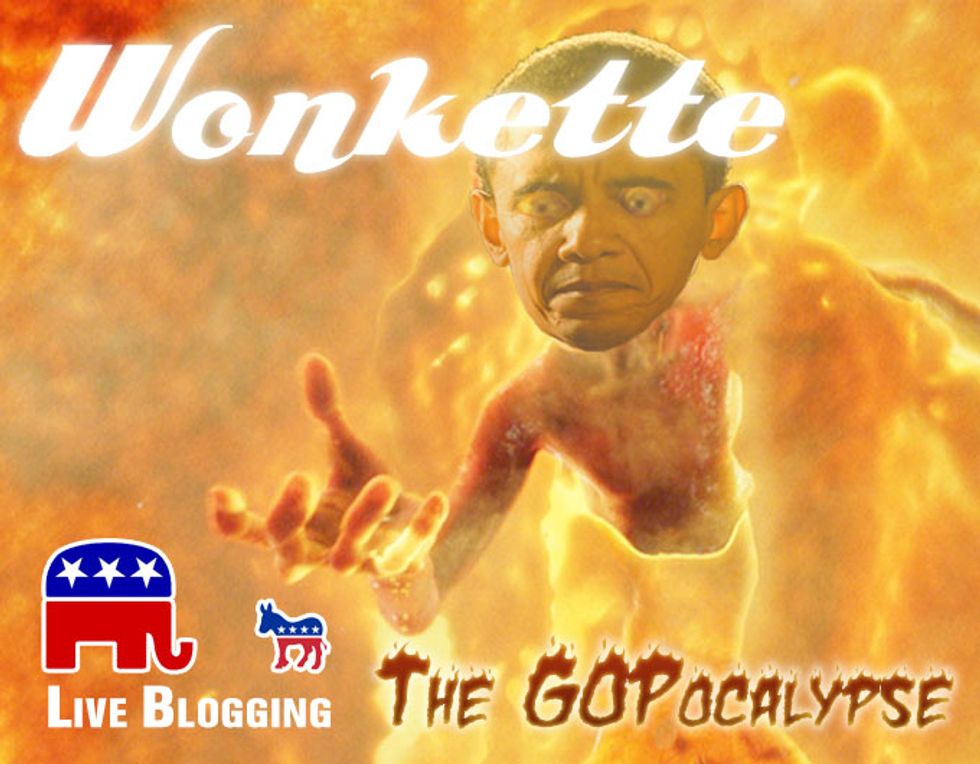 Well! We are guessing if you are still with us, we don't have to work too hard to get you up to speed. Things are a little bleak here in the Washington Bureau, where we are into our fifth hour of Fox News exposure. Come with us, Wonketteers, as we introduce you to the new world in front of you.

11:11 p.m. -- We are still waiting for the complete pile of awful that is the resurgence of the most incompetent Republicans in America, the Kansas Three: Pat Roberts, Sam Brownback, and Kris Kobach. Kansas, why did you flirt with moderation and fill our head with these crazy ideas? The Senate seat will stay Republican, Kobach will keep evangelizing for voter suppression, and Brownback is somehow within reach of hanging on.

11:15 p.m. -- Scott Brown, having said he would "challenge" the results in New Hampshire, now says there are 2,500 specific ballots he is waiting to see. But he'll have a gracious speech soon, since he's definitely not stalling to cover for the fact he didn't write one!

11:29 p.m. -- Joni Ernst. In the Senate. The United States Senate. She will have souvenir pigs all over her office and will have fundraising retreats on hog farms during castration season.

11:36 p.m. -- Scott Walker is about to give his victory speech. At least that will break up the several minutes of smug Karl Rove. We might have Fox News poisoning.

11:40 p.m. -- Scott Walker is calling Kleefish "the best lieutenant governor in America." Maybe her ad actually pulled him up with women? Not sure we believe that just yet, but it's hard to resist her hypnotic gaze.

11:43 p.m. -- Fox switches away from Walker to go live to Iowa. "We are going to Washington and we are gonna make 'em squeal!" -Senator-Elect Joni Ernst

11:46 p.m. -- Martha Coakley loses in Massachusetts. Sadly unsurprising as she is, as our Editrix says, bad at politics.

12:02 a.m. -- Megyn Kelly has stormed into the Fox News Decision Desk Nerd Terrarium to challenge them for not calling Virginia.

12:11 a.m. -- Entering Hour Six of Fox News exposure. Charles Krauthammer is telling GOP to take "a page out of Newt Gingrinch" -- pass a bill every week. "Start with something small. Keystone... start small, start narrow, then go to things like corporate and individual tax reform." January will be shock-and-awe time, Wonketteers.

12:15 a.m. -- Paul LePage has won re-election in Maine. He hit on the magic formula of unraveling the social safety net and totally not hoping an angry mob wipes out an Ebola nurse who defied him to take a bike ride.

12:33 a.m. -- Sam Brownback has bankrupted his state and torn his own party apart by supporting primary challengers for moderate Republicans, then won a second term as governor of Kansas.

12:44 a.m. -- Karl Rove & Friends have been calling themselves "The Campaign Cowboys" all night, and they've crossed the line to cosplay.

12:48 a.m. -- We are waiting for the Aleutian Islands to come in, for real you guys. The Alaska Unity Ticket, made possible by Byron Mallott's rapid-onset Democrat Humility Syndrome, might take the Governor's Mansion from Sarah Palin's second-in-command and it could be the feel-good story that will keep us warm as we stare out on the bleak electoral hellscape before us.

12:53 a.m. -- Charles Krauthammer staying up late on Fox News: "The National Weather Service has upgraded the election from tropical storm to tsunami." DON'T DRAG THE NATIONAL WEATHER SERVICE INTO THIS

12:58 a.m. -- We are looking into the various weed initiatives across the country and will have an update in a few minutes. Burning issues!

1:12 a.m. -- Virginia is once again The Land of the Perpetual Recount, as Warner and Gillespie race is very likely to fall within less than half of one percent. The squadrons of scrappy young lawyers, having been held in stasis since last year's recount, will probably be deployed by morning.

1:19 a.m. -- Here is update 1 of 2 on the weed vote, Wonketteers! In Florida, medical marijuana had the support of the majority of voters, but the olds will not be getting high for actual glaucoma (not your fake glaucoma, fakers) since they fell 2% short of the 60% required to amend the state constitution. Oregon voters totally passed it, so now they don't have to feel jealous of Seattle anymore! (It seems like a million years ago that Colorado and Washington State freed the weed. Have you seen the returns from Colorado tonight?)

1:39 a.m. -- Weed update 2 of 2: Alaska is only about a third in and the "Yes, Legalize It Please" side is ahead by about six points. We will certainly monitor that, though did you know those lunatics just finished voting 40 minutes ago? Don't they know what time it is here?

And Washington, DC? You know what happened, Wonketteers, but we will tell you anyway: it passed 69-31. NATURALLY. The only question now is how long the House Republicans will be able to restrain themselves before they find some way to "defund" it as part of the "oversight" role.

2:01 a.m. -- While we are waiting for results from the Island of Misfit Toys up north, we would like to once again scold Kansas for leading us on like that, pretending you liked that nice boy Greg and you were going to throw out that old guy who'd been sleeping on your La-Z-Boy.

2:14 a.m. -- Fox News had definitely busted out the C-team for their overnight election panel.

2:31 a.m. -- There are semi-fresh numbers from Alaska to report. We won't talk about the Senate race, OK? I mean, you can go look if you want to. We don't think you really want to do that, though. We will tell you that, gubernatorially, the Dem-Indepdendent Unity Ticket is still holding onto a 2400-vote lead over Republican Governor Sean Parnell. The math looks a little rosier for the Weed Please ballot initiative, where Team Yes remains ahead by four points.

Almost half Alaska's precincts haven't reported in yet! No Sleep Till Cold Bay!

2:49 a.m. -- With 74% of Alaska's precincts reporting, Weed Please over No You May Not is holding steady at  52-48. The race for governor remains too tight to call, with fewer than two thousand votes between independent Bill Walker and incumbent Republican Sean Parnell. We would not even mind having two Governor Walkers! We would be taking the name back! Also, we want Byron Mallot to win, because he was such a mensch about dropping out and becoming the running mate to give Bill a better chance. We're Mallott fans here in the Washington Bureau!

3:29 a.m. -- Well, these Alaskans are taking their sweet time. We will let you know whether they'll get their weed, or their unity candidate for governor! For now,  we will leave you to weep in your beers, Wonketters.