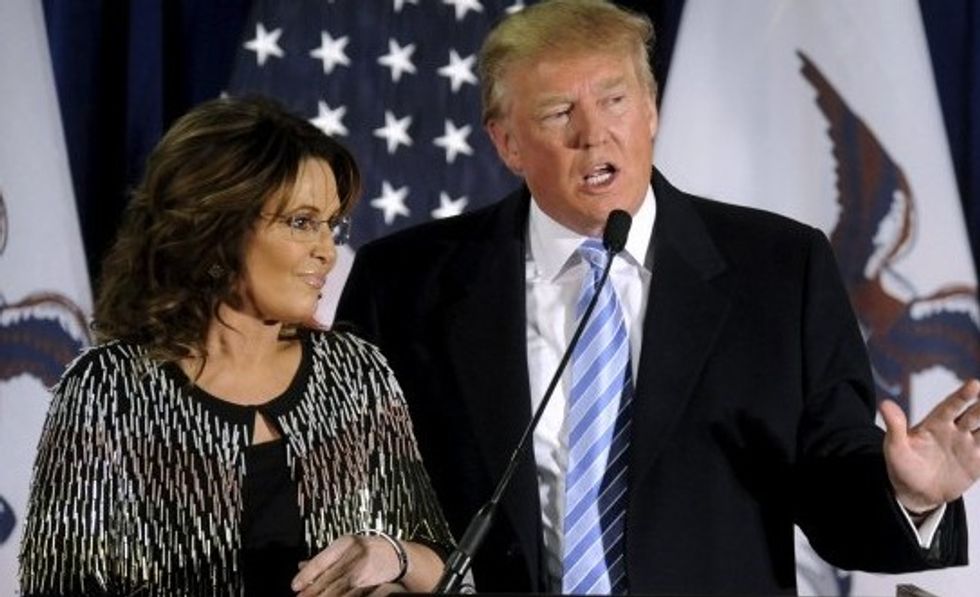 Breaking news, and by "breaking" we mean our hearts are BROKEN, because Donald Trump has announced that he's going to try campaigning like a grown-up, instead of like a genocidal megalomaniacal narcissist who's worried his dinky-winky penis stump doesn't measure up to the other boys. What fun is that even, and how will that keep Wonkette in business? Not a wise decision, The Donald:

Donald Trump, after notching a big win in New York, is planning to roll out significant changes in his campaign, including giving a policy speech on foreign affairs and using teleprompters and a speechwriter.

He and his newly recast team also are pledging to do more outreach to Washington Republican leaders, who have often been hostile and the target of Trump attacks, and to spend significant amounts of money to run a more conventional campaign.

Mr. Trump, in an interview, acknowledged the need for a shift. “The campaign is evolving and transitioning, and so am I,” he said. “I’ll be more effective and more disciplined.” He’s changing, he said, because “I’m not going to blow it.”

OMG so many problems we see right off the bat! First of all, you know who uses a teleprompter? Barack Kenyastan Dumb-Dumb Gay Obama is who. Does Trump really want to be like that guy?

And a speechwriter? Who is there that is alive on planet Earth who could ever come up with eloquent words like these?

Well, I think many. I mean, when we get into the Bible, I think many, so many. And some people, look, an eye for an eye, you can almost say that. That’s not a particularly nice thing. But you know, if you look at what’s happening to our country, I mean, when you see what’s going on with our country, how people are taking advantage of us, and how they scoff at us and laugh at us. And they laugh at our face, and they’re taking our jobs, they’re taking our money, they’re taking the health of our country. And we have to be firm and have to be very strong. And we can learn a lot from the Bible, that I can tell you.

[wonkbar]<a href="http://wonkette.com/598026/sarah-palin-endorses-donald-trump-for-emperor-of-alaska-and-also-too-america"></a>[/wonkbar]WHO COULD WRITE THAT EVER? Actually, there's one woman who can, you betcha, and she's already a Trump supporter! So, if you are an American who has the vocabulary skills of a drunk wombat, and perhaps a popular Facebook page based in Wasilla, Alaska, and maybe a well-known grifting operation ... what we are saying is Sarah Palin, Donald Trump has a job for you to quit halfway through, as his "speechwriter." It's the only way he will retain the vivacious personality that has convinced millions of Social Security-dependent Americans to ride their Hoverounds to Trump rallies to wear cute hats and hurl obscenities at black protesters.

C'mon, Sarah. He NEEDS YOU, and so do we! (Unless he's already filled the job, but he could always let that person park the jet while Sarah writes speeches.)

[wonkbar]<a href="http://wonkette.com/595927/lets-order-chinese-food-and-watch-donald-trumps-brain-essplode"></a>[/wonkbar]Because really, what was wrong with his campaign before? Was it so bad for him to say Mexicans are rapists and we should send all the American Muslims back to their native countries (Dearborn?) and bomb the shit out of ISIS, all while abusing journalists? We might have been misinterpreting the message of his campaign, but we thought those things were the way we were going to Make America Great Again.

[wonkbar]<a href="http://wonkette.com/599291/donald-trump-guarantees-his-big-dick-will-make-america-great-again"></a>[/wonkbar]For Trump to go all serious on us now, right when he's getting ready to fully "schlong" the Democratic nominee, would ruin America and hurt Lady Liberty's feelings.

But wait, maybe it will be OK:

Phew! All is well and good with the world and Donald Trump will still manage to fuck up the GOP for generations to come, yay!

Now go help him do that, Sarah Palin. America NEEDS you.