Wonkette Official Medical Opinion: We Are So Fucked 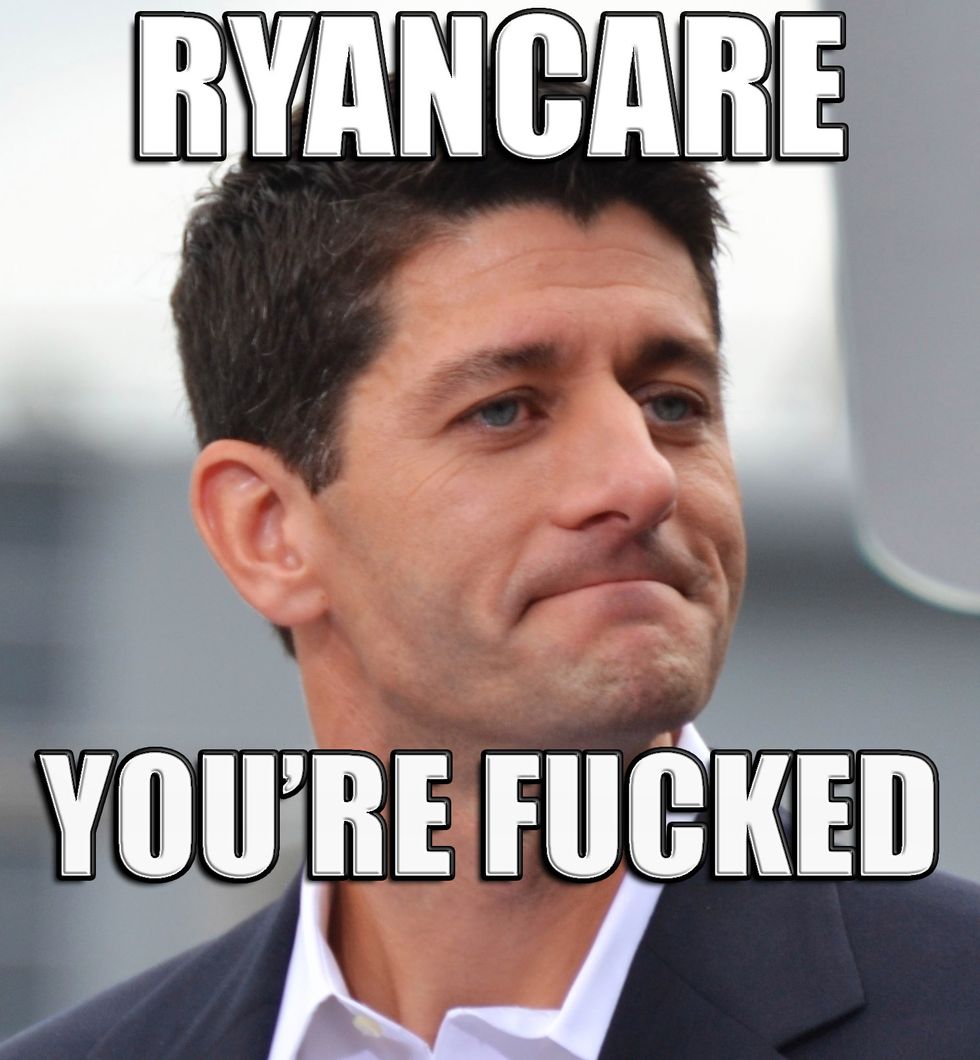 Hi, Wonkers! Today we have a special guest post from a Wonker Just Like You, "Katie Finley," who is very GRRR about Paul Ryan's Terrible Horrible Trumpcare Plan! Read it so you can be mad JUST LIKE KATIE.

Human incarnation of a haunted ventriloquist dummy Speaker Paul Ryan and his band of merry racists in the House GOP just released their plan to repeal and replace the Affordable Care Act. They’ve literally had seven years to work on this thing, and basically all they came up with was to write “FUCK THE POORS” on a bar napkin.

I’m an EMT/paramedic student in a low-income state who works with patients in rural and urban hospital and emergency settings. I see patients every day who have been positively affected by the ACA, and I don’t think people fully understand how much it’s going to suck when it’s gone.

Here’s how hard the Republicans are about to fuck you over if you ever even THINK about needing medical care, ya moochers:

Starting on the SECOND PAGE of this trash fire bill, it states that no federal funds provided to states for healthcare can be used for payments to providers that offer abortion services. This means Medicaid recipients can't go to places like Planned Parenthood for ANY service without paying out of pocket. This, even though the Hyde Amendment has already banned federal funds (like Medicaid) paying for abortions since NINETEEN SEVENTY-FUCKING-SIX. This is idiotic and evil in many ways, but I’ll sum it up like this: Do you know what’s dangerous to patients? Untreated STD’s, self-induced abortions, undiagnosed cancer, and lack of patient education about reproductive health. Do you know what’s not dangerous to patients? ANY OF THE SERVICES OFFERED BY PLANNED PARENTHOOD.

But how will they dole out the rest of the “Not For ‘Bortion” money to the greedy proletariat who, as Jason “Dickhole McFuckface” Chaffetz so eloquently pointed out, shouldn’t spend their money on luxuries like iPhones in the first place, but rather should spend it on "luxuries" like basic medical treatment? The bill outlines that states will get a set amount of money for healthcare expenditures, determined by population. And if they exceed their target total expenditures, their funding for the next fiscal year will be cut. Because that’s how Republicans think math works.

Determining state healthcare funding based on population, and not median income level or medical assistance needs, is really fucking stupid, you guys. Making that funding amount basically unchangeable is even stupider. The Baby Boomers are a big percentage of the population, and they are rapidly approaching geriatric age, which means a huge chunk of the population is about to need a LOT more medical assistance, which is going to cost a LOT more money.

As for Medicaid, the bill will get rid of Medicaid expansion after 2020, apply home equity limits for Medicaid (i.e., if your house isn’t enough of a shit heap you can’t see a doctor), give incentives for states to re-evaluate people’s need for Medicaid at least every 6 months, and charge people monetary penalties if their income increases and they are kicked off Medicaid.

And of course, because they’re Republicans, they’ve decided to sneak in some nifty tax cuts for rich people, like the Investment Income Tax, which only affects people making more than $125,000 per year. And because TAXES ARE EVIL, the bill offers a laughably small refundable tax credit so people can pay for their health insurance. UNLESS it’s a health plan that includes coverage for abortion. Seriously.

I literally have not been able to stop screaming since I read this goddamn thing. I see patients every single day who are on Medicaid, can’t afford insurance, or otherwise can’t afford to get the medical care they desperately need. These people avoid getting treatment for initially minor illnesses/injuries because they can’t afford it. These minor problems quickly become major problems, and turn into emergencies. Under a cool law called the The Emergency Medical Treatment and Labor Act (EMTALA), emergency rooms must provide medical care to people, regardless of their ability to pay. This is a great law, but when you have a lot of people who can’t afford insurance or hospital bills, ERs see more patients who are at serious risk of morbidity and mortality because of untreated or preventable illnesses. People are dying, and will continue to die because of lack of access to medical care, and this bill targets the most vulnerable people to benefit the wealthiest. Being poor shouldn’t be a death sentence.

In conclusion, FUUUUUUUUCK YOOOOOUUUUU, PAUL RYAN. We sure do hope your little plan is as Dead On Arrival as your fellow Republicans seem to think it is!

Wonkette is fully funded by Readers Like You, who sometimes even get to do guest posts like Katie Finley just did! If you wouldn't mind, be a good sport and throw us a few dollars!