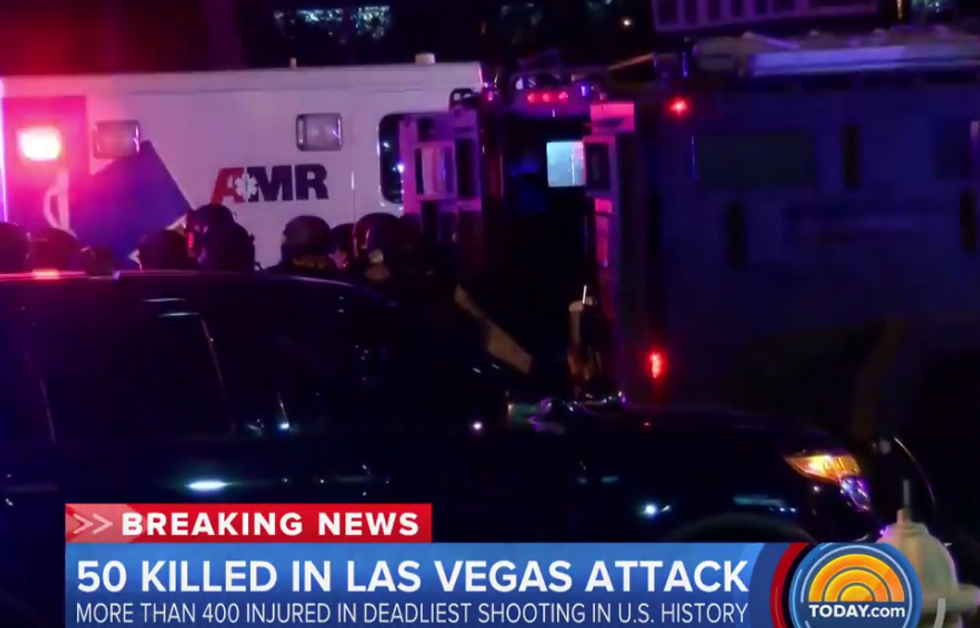 As we write this, MSNBC is reporting that, as far as we know right now, "over 50" people were murdered (with more than 10 weapons, seemingly some of them fully automatic machine guns) in Las Vegas, and 406 have been transported to a hospital. As they always do, these numbers will change. Commentators have already begun to try to understand the profile of Stephen Paddock, the 64-year-old murderer, noting that his age alone separates him from most mass shooters. One thing's for sure, though, and it's that this fucker used guns to carry out his massacre. Another thing's for sure, and it's that if we're already talking about how this guy was different from "most mass shooters," it's because we have a sample of "most mass shooters" to look at in the first place, which is just insane. It's our uniquely American problem.

Wonkette knows it's #TooSoon to mention these facts, but frankly we don't give a damn.

Here's another idea: A country where we're even talking about banning concerts in the open night air in order to protect the rights of America's gun-humpers isn't actually a free fucking country.

If these current numbers hold, this is the largest mass shooting in modern United States history. We've broken another record! It was just a little over a year ago that America broke its previous record, with the Pulse nightclub shooting in Orlando on June 16, 2016.

Before that, the previous record holders were the 2007 Virginia Tech shooting, where 32 were murdered, and the 2012 Sandy Hook shooting, which killed 26, 20 of whom were little children. As the Washington Post's Drew Harwell notes, that means the four deadliest mass shootings in modern American history have all happened in the last 10 years.

The perpetrators were all different and had different motivations. But every single damn one of them was able to get his hands on whatever arsenal he (and she, in the case of San Bernardino) was in the mood to use that day, for the sole purpose of killing people.

Oh, we'll hear the usual yammering from the usual fuckheads about how maybe if everybody had been armed, this might not have been so bad. We're not sure who, precisely, would have been able to prevent a man suddenly raining a hail of gunfire from a hotel room 32 floors up and 1,700 feet away, but for real, maybe if the housekeeping people at the Mandalay Bay hotel had been armed or maybe if country singer Jason Aldean had been packing heat, he could have gone "pew pew!" and none of this would have ... nope, fuck it, we're not doing this.

If we learn, as it seems, that these were indeed fully automatic weapons, the laws on ownership are a bit confusing. They're legal, but you can't buy ones made after 1986 if you're not a dealer. Already existing weapons that meet that criteria and a few others can be traded back and forth, as long as they're registered. Indeed, many of the nation's registered machine guns live in Las Vegas, because of something called MACHINE GUN TOURISM. Daily Kos notes there are two machine gun ranges near Mesquite, Nevada, where the now-dead mass murderer lived. They add:

While it would be complete speculation at this point to indicate that one of these ranges was the source of the weapon, the availability of these weapons in the area means that getting your hands on a machine gun — or practicing the use of a machine gun — doesn’t require years in the military or black market connections.

We don't know how dude got these guns. What matters is he got them.

If we decided to do something bold and ban semi-automatic and fully automatic weapons entirely, gun-humpers from sea to shining sea would be taking a knee every time "The Star-Spangled Banner" played, bellyaching about the loss of their supposed freedom. We imagine they'd get over it, eventually, once they got their tantrums out of their systems.

Just the other day, American gun violence victim GOP Rep. Steve Scalise came back to Congress after his long period of recovery. We'd say maybe, considering his recent life experiences, he could be the rare Republican to stand up and do something sane about gun violence. We don't have much hope, though, as Republicans have been using Scalise's recovery time to push a law to make it easier to buy silencers for your penis guns, because that's obviously a high priority.

Scalise, for his part, is in hardcore Thoughts 'n' Prayers mode:

We included TBogg's reply right there, because despite what some might believe, it's not unfair to slam Scalise for being a fucking hypocrite.

[wonkbar]<a href="http://www.wonkette.com/623711/its-morning-in-america-which-means-50-dead-and-400-injured-in-las-vegas-shooting-massacre"></a>[/wonkbar]So here we are, doing this song and dance again. Americans have again been murdered in a mass act of gun violence, adding to the insane number of Americans who die in gun incidents that don't make the national news. We'll be subjected to endless bullshit about #NeverAgain and #HowDidThisHappen, and then the news will die down, and the nation will do literally nothing about it until next time, and there will be a next time, at which point we'll rinse and repeat and do it all again.

At all moments in this cycle, it will be #TooSoon to have a real discussion about gun control, because we have to consider the feelings of America's guns, the men who love them, and the NRA, an organization people might think of as a terrorist group, you know, if they were being honest.

What a fun country.

You have our permission to skip this morning's tithe to Wonkette and throw some money at Everytown for Gun Safety, Gabby Giffords's Americans for Responsible Solutions, Moms Demand Action, and the Brady Campaign To Prevent Gun Violence. Be safe.