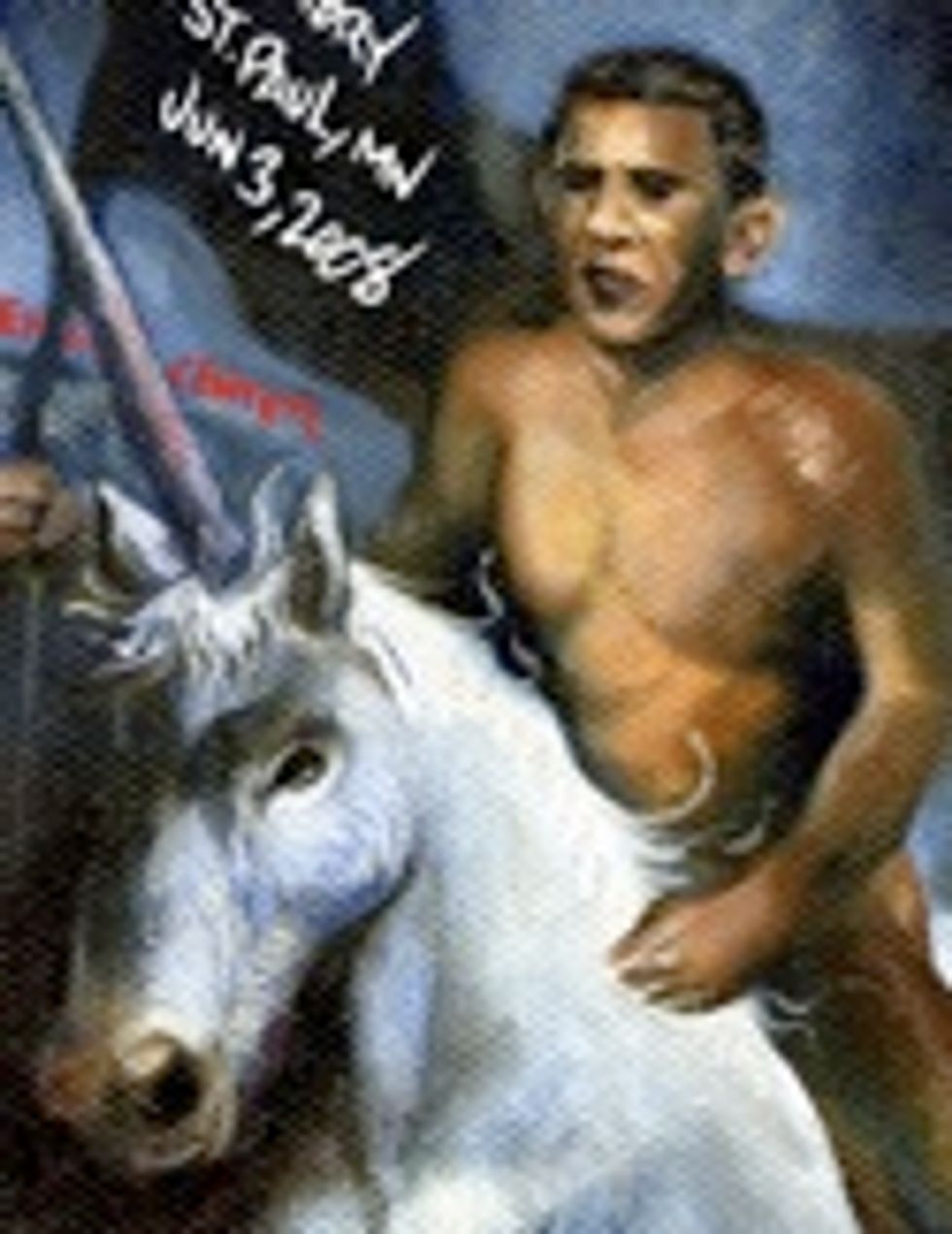 Friends and enemies, it is time to put aside our irrevocable partisan differences and unite in the pursuit of inexpensive yet offensive X-mas/Kwanzaa/Ramadan/Channukah/Jedi gifts for our few friends and many enemies. In these troubled times of National Doom, you want a present that is a) cheap, and b) either wonderful or truly horrific. But the gift must not be some wacky novelty manufactured for the sake of laffs. It must be terribly sincere. (Unless it's not!) What we're saying is, how many prints of a burly, naked Barack Obama riding a unicorn to victory will you be buying this year?

This is Part I (One) of our 2008 War On Christmas Gift Guide. Expect a few more installments, this week!

Oh, look at this thing. It is magnificent! The artist Dan Lacey made this magical painting to commemorate the night when Barack Obama finally defeated what's-her-name, Madeline Albright, for the Democratic nomination. And then this Barack held his Victory Dance at the same forlorn St. Paul sports arena where John "Walnuts!" McCain would host the GOP's saddest GOP convention. And now you can buy a big signed print of this "Barack Obama Nude On A Unicorn Victory Print" artwork. $20, mailed in a tube, you seriously cannot beat this with a stick. [Faithmouse]

Do you like Clowns? No? Well, join the crowd. But what if there were actual photographs of naked clowns? DO NOT WANT? Well, fine, be that way. But while you're being that way, we would like to note that the 2009 Naked Clown Calendar is a fundraiser deal to fight the scourge of Multiple Sclerosis (MS). So you can buy this calendar of, uhm, naked clown photographs and help fight MS, or you can ... buy it and give it to your parents or boss or somebody. "It's for a charity," you can say, grinning. "Hang it up where everybody can see how you are against MS." Come on, $18! You can't even get a signed print of naked Barack Obama humping a Unicorn for that kind of money! [Naked Clown Calendar]

Oh hell YES finally a video game that BRINGS IT. This game is called, let's see, yes, ZooRace, and as you'll see from this incredible promotional preview video, it shows what happens when some fancy arugula-sucking Librarian with her book learnin' is forced to realize the Hard Truth of the Noah's Ark fable, after a simpleton (in a business suit) turns down her offerings of dictionaries and encyclopedias and other wordy tomes, because he likes stories about how Noah of Ark only loved to have beastly races, for enjoyment, when the Sumerian God "IT" drowned the Earth, for sport. And then the Librarian gal has a sex-dream about running with the animals. If you've got kids, you MUST BUY THEM THIS GAME, they will never want to play the video game machine ever again. Free to download and try, $17.77 to buy! (Because Ron Paul took $17.76.) Do it now. [ZooRace]

Face it, 2009 is going to be awful. You know how everybody's out of a job and everything sucks? Well, next year will be just like this, times seven-hundred billion. We are not going to have a lot of money for the ancient pleasures, such as martinis at some elegant hotel bar. We are going to be scraping the fetid carpet for bits of shitty Mexican weed. We will start pretending the seeds and stems are actually pretty good, after all! We will cry when we remember nights when it seemed like a perfectly good idea to give $200 to some bike-messenger/office intern because he had a coke connection. And then we will buck up and learn to make our own pipes and bongs again, as Americans used to do, back when we were still American. Build This Bong, $12.95, free shipping if you throw another dozen bucks at Amazon. [Build This Bong]

Every meat lover will love these frivolous steak "branding irons" from the nostalgic time when we had meat to cook, at our homes, before we became homeless. Your old racist guests who enjoy hot young male ass will love the whimsical "I'm an Elephant!" brand, while your liberal loser friends can ... uh, just sort of amuse themselves with the idea of getting a steak. A steak with a donkey brand! Culture wars! Just $25.95 for two of these things, in the two styles. [Rachel Roque/HomeWetBar]

Who says this mysterious Hawaiian moderate Barack Obama is our first black president? Well, kill them, those who say that. Our first and best African-American chief executive was none other than Ronald "Weird Harold" Reagan. You can own a little shrunken black head of this cat, Ronald Reagan, to show these Hopefuls what is really going on. Only $155 ... wait, really? $155, for this awful shellacked turd? Forget that, and buy this lousy "Ronald Reagan Famous Quotes Art Print" thing for $19.95, if you must insult a senile old Reagan lover (Grandpa?!) this Xmas. [Victory Stores 00 Yahoo]

ALSO!This is our beloved 2006 War On Xmas Gift Guide.