Wonkette's Own Alabama Gal Says Y'All Might Get Doug Jones In Your Christmas Stocking. Roll Tide! 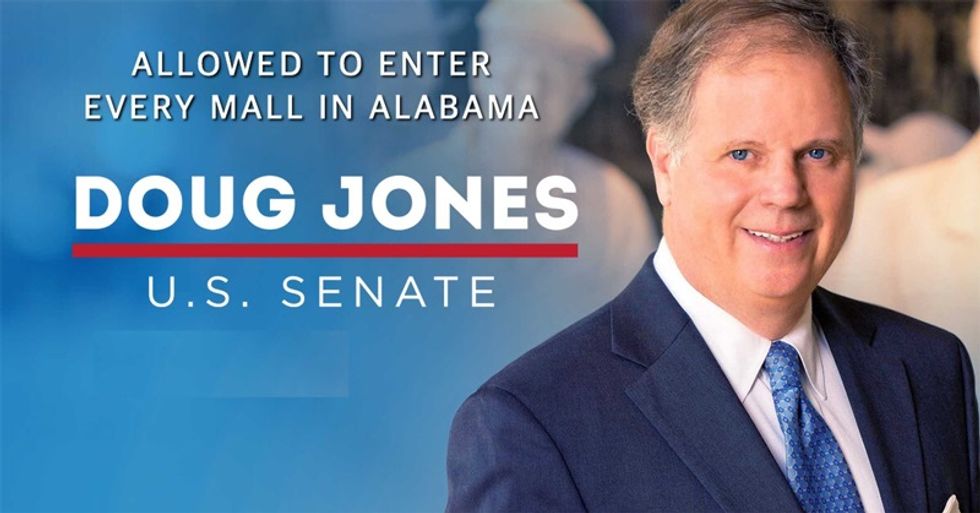 So hey y’all, what it do? It’s your girl, Fakakta South, 'member me? The one from both Alabama and a long time ago? I'm the one who kept trying to tell y’all that we, the Dukes and Duchesses of Hazzard, weren’t exactly what you thought and to stop being so prejudiced about ignorant southern people? Well, you may have noticed lately that there's been a guy in the news a lot who is the actual incarnation of every terrible thing about Alabama ever, and all decent people should in fact be prejudiced against him as much as you want. Yes, it's Ol' Roy Moore and the horse he literally rode in on, full of fear of Muslims and loathing for gays, all while leching after every gal who ever worked at a 1977 Contempo Casual at the Gadsden Mall. I worked real hard to be an ambassador for all of us who were born not an asshole in the Dirty Dirty South –- and I am here to tell you WE STILL EXIST.

So when our most exalted Editrix asked me "uh, so, what is going on down there???" I wanted so bad to tell her that it was all a fever dream brought on by our collective alcoholism of the last 325 days -– but for some reason the "liberal" media, and particularly CNN, have been blowing that theory up by having folks like Ohio resident and Roy Moore spokesperson Janet Porter on over and over again to dispute my word, without, if I may complain, having hardly any folks on to rep for Doug Jones. But then again, who wants to talk about stupid legislative policy like fair wages, clean water, decent education, hospital closings and health care, when there's a lady willing to spit hellfire about how Mr. Jones is running specifically on the "murder all the full term babies for fun and profit" ticket? So I appreciate the chance to try and tell you fine people the truth as I see it "on the ground" as it were -- and how it really does feel like Roy Moore will lose and Doug Jones will win and no one will be murdered on purpose.

Here’s what I know: The state is covered in Doug Jones signs. It has been that way since he became the Democratic party's choice, when Big Luther Strange and Roy Moore were still fighting it out to be the GOP candidate. The yard signs proliferated wildly when we found out he was going up against the racist, sexist, homophobic, law-breaking, bigoted national embarrassment who even Alabama had already kicked out of a job twice before. When the rose wines, yearbooks, and tight white underwear stories came out, the whole state exploded, and people were freaked the fuck out -- well, shocked but not surprised. Okay, honestly most of us had always thought that it was gonna be little boys, not girls, that Roy was secretly humping on, but this was still something.

I've lived in the Heart of Dixie all my life, and I have never seen support like Doug Jones has gotten for any candidate, in any race -- much less a Democrat. Now "some people say" yeah, but that's in the city. But guess what? Even in Alabama, that's where most of the people are. Birmingham, Mobile, Huntsville: Those are our big three, and if you drive through those places, even the fancy, rich, typically country club parts, you would not be able to tell that there is another candidate besides Doug Jones on the ballot. Every single "educated, white, typically GOP voter" I personally know is voting for Doug Jones -- even the assholes who voted for Trump just to be dicks. The GOP for Doug is a very popular movement and they have their own yard signs as well. But even in the back-woods, back-water, and back-asswards parts of the counties, there's way more vocal, public support for crystal meth than there is for Roy Moore. And yet, the 24 hour cable people manage to find what we call a tornado-survivor-type representative (the ones with the worst accents, fewest teeth and most overalls or camouflage) to say that "Everybody here loves the Judge." People are talking about it everywhere, but they are mostly saying Doug Jones has GOT to win, and also that he probably won't. Everyone I ask says the same thing. "I am voting for Doug Jones, but I'm afraid Roy Moore will win." The polls have been reported to go back and forth, but today one from FOX NEWS, BITCHES, has Doug Jones up by 10 points. Doug Jones voters are still worried though because this is Alabama and if there's a wrong way to do something, everyone -- even the good Alabamians -- assumes we will do it that wrong way the hardest.

My 18-year-old kid has been canvassing for Jones in Tuscaloosa, and she says most of the people "hugged her neck, and told her they would show up for Doug," but "two old women who were driving by asked us what we were doing. We told them, and one of them said 'Well don't come to our house, we're Roy Moore all the way.'" My kid said she thought that was a shame since these chicks were really old, and Roy wouldn't even want to go all the way with them anymore, but out loud she just said "Have a good weekend."

The Doug Jones people, like my college kid, know what they are fighting for -- and as bad as Roy Moore is, most Doug Jones supporters are concerned about not just keeping a (do I still have to say "alleged"?) child molester out of the Senate, they are aware of actual issues that affect the state and country. They know what kind of shit-shape this state is in, and they think it is high time that a Democrat had a chance to fix it. For the record, the biggest colleges in our state, both Auburn University and the University of Alabama, have endorsed Doug Jones and in a state where College Republicans have historically bred the likes of Jeff Sessions, we gotta give it up to these millennials and their new way of thinking.

The Roy Moore supporters, on the other hand, are a little riled up their ownselves. They are not excited to vote for Ol Roy because they think that screwing around with minors is good or bad. Those who say they will still vote for Moore believe that the stories are a lie at best and inconsequential at worst. His supporters do not believe what they heard about on Facebook, not since Fox News and Sean Hannity convinced them all to bust up their coffee machines. They also did not read the article, because they will not read something called the Washington Post and they do not believe the women. They do believe however that there is a cabal made up of the Post, the LGBTQ, and Mitch McConnell somehow, that is being financed by George Soros, and it has plotted to take a good and godly man down. They are looking at this like we look at a lot of things down here, like it's a football game, and winning is what matters. More than anything else, it's about beating a Democrat and pissing off the liberals. You can't get a lot of these folks, including Roy Moore, to talk about actual policy or what a senator's job even is, because they do not know or care, as long as it involves stopping Planned Parenthood from killin' all them kids, and WINNIN'.

Case in point: my 67-year-old Mama sent me a text yesterday that said (verbatim, colloquialisms and all):

I just got in a dust-up at the Piggly Wiggly. I was walking in and a pretty young woman asked if I wanted her buggy. I said sure. Then, I don't know why, but I said "Don't forget to vote Tuesday." She stopped dead in her tracks and said "ABSOLUTELY! DOUG JONES!" I said "Of course!" then some grey haired old biddy from out of nowhere yelled "NO WAY!!!" We just sorta laughed but the old woman kept on, "NO DEMOCRATS!" Then an old man chimed in "I was gonna write in, but hell this is too important. I'm going to vote Democrat for the first and I hope last time in my 73 years." I coulda kissed him. The first lady and I high-fived and I went on in. RTR

Now, for those who don't know, "RTR" means Roll Tide Roll and we say that at football games, and after the blessing, and I defy you to be ugly about my mama, but this goes to show you the level of what this has turned into for people here -- old folks shouting at each another at the grocery store like pregaming drunks at a tailgate party on the quad ... but it was 3 to 1 for the Democrat. It appears that there is a core group of Republicans who just hate Democrats, and worry constantly about all the precious unborn (blue eyed) babies, but how many of these identity politics voters really want to be identified in the long run as fine with being a pervert and are willing to go out and prove it with their vote? That's a awful small hill to die on, and I'm pretty sure it's fewer than y'all think. Everything around here feels different, and I understand if you don't believe me, but I'm telling you -- wait til tomorrow, I think we just might shock the world.