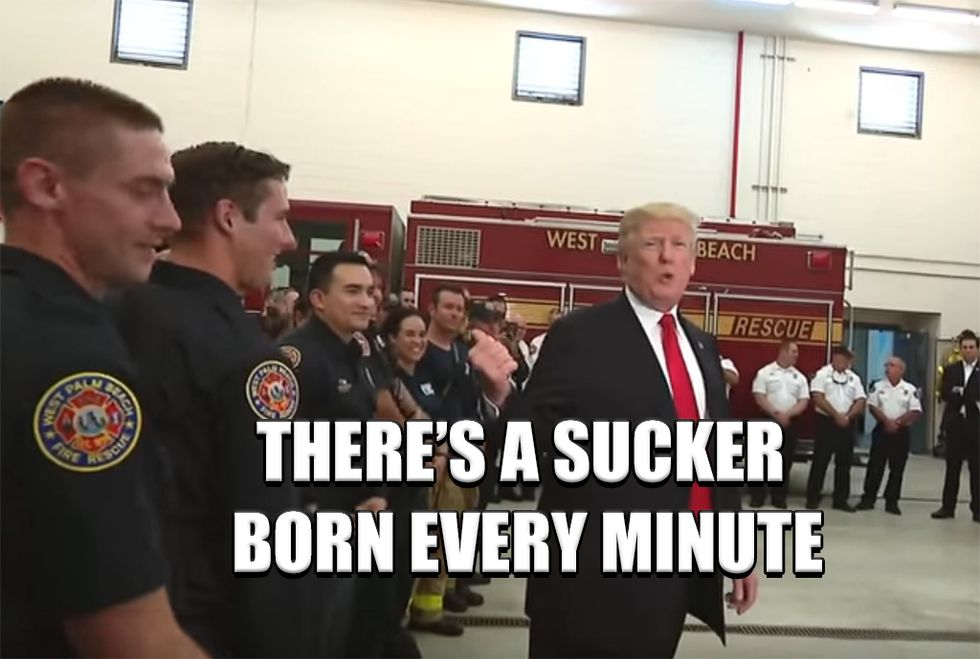 Morning Wonketariat! Here's some of the things we may be talking about today, but first A HUNGRY WOMBAT!

The president is golfing for the third day in a row after saying he would get back to work post-Christmas. Maybe today the view to the golf course will be blocked by an aircraft carrier!

Robert Mueller has been eyeballing the RNC's use of stolen DNC data after Jared Kushner and Trump's data dingus Brad Parscale brought in Cambridge Analytica to coordinate election strategies.

Attorneys for Trump plan on calling Mike Flynn a big, fat liar if he accuses Trump of anything, even though Trump spent months publicly (and privately! to James Comey!) defending Flynn.

"Posh George" Cottrell was the finance wunderkind of Brexit backer Nigel Farage, and now he's caught up in the sprawling web of Trump-Russia probes.

The Russian hacker who claims he hacked the DNC in 2016 says he can prove he was responsible for a wave of international cyber attacks, including WanaCry, via a convenient "poison pill" of personal information he left inside codes during the hacks.

Businesses large and small are scrambling for new loopholes created in the Trump/Ryan tax fuckery bill.

The IRS is warning people that prepaying their property tax might be a bad idea as you could still face a cap on deductions.

In a new op-ed REXXON says he's super happy with his job as Secretary of State, even if he's not on the same page as Trump.

Trump was running his mouth in front of some firefighters and started lying about all the things he hasn't done. Again.

No matter how much he tries, Donald Trump is still living in the shadow of Barack Obama, attempting to take credit for Obama-era accomplishments.

Late last night the gay hatin' ALLEGED pedophile and LOSER of the Alabama Senate special Senate election Roy Moore filed a suit to try and stop Alabama from certifying the election, but the Alabama secretary of state has caved and will swear in Doug Jones at 1 p.m. today.

With the next 90-day assessment looming, Trump could scuttle the Iranian nuclear deal early next year year even though inspectors say Iran has been complying with the terms of the agreement. They're dicks, but at least (for now) they aren't dicks with nuclear arms.

A new investigation by the DHS inspector general has found it's taking way too long to pull tainted food off store shelves, and it's pointing fingers at the FDA.

All the banking deregulation we keep seeing is being pushed by the same Wall Street crooks who begged for bailouts during the financial crisis, prompting Democratic Ohio Sen. Sherrod Brown to go all Cassandra and state, "People are going to look back, whether it's five years, 10 years or 15 years and say, 'This was the beginning of a massive deregulation scheme."

A federal court is giving the EPA 90 days to revise regulations on lead paint instead of the six years sought by Scott Pruitt and the Trump administration.

You might not be hearing about higher education fuckery from the Trump administration, but that doesn't mean it isn't happening in the form scrapping debt relief, axing federal assistance for poor kids and grad students, and encouraging Fly Over Country to skip school.

A federal judge in Michigan lifted a temporary restraining order on a Project Veritas sneak-thief operation into the University of Michigan in an attempt to slime teachers.

A federal judge has blocked a Republican ban on Mexican-American studies in Tuscon, Arizona, public schools, calling the ban an "invidious discriminatory racial purpose and a politically partisan purpose." Taco Tuesday for everyone!

A scandal is brewing in Mississippi over a mentally challenged boy who was thrown in jail and ignored by the state.

New Orleans has a problems with dirty cops being kicked off the force getting jobs in neighboring parishes. Crime only pays when nobody cares.

Gangs in Chicago have begun forming unlikely alliances while homicides and assault rifle use increase.

Baltimore has reached 343 homicides, setting an obscene per capita rate for killings to 55.8 per 100,000 people.

ICYMI: Columbia, South Carolina, approved a ban on "bump stocks," making it a misdemeanor to use one, punishable with a fine and 30 days in jail.

Russian President Vladimir Putin has called for Russian authorities to "liquidate bandits" deemed responsible for an attack on a Russian supermarket that injured 10 people in St. Petersburg.

Israel will name a future Western Wall train station after Trump. How much do you think they're paying for the licensing?

Milo Yiano-whatever is suing his book publisher, and the publisher's rebuttal hilariously redefines the art of trolling.

The former lawyer for pharma-bro Martin Shkreli has been found guilty of helping Shkreli steal $11 million Ameros to repay investors after Shkreli fucked up and lost all their money.

Take a gander at this giant Trump dog statue in a Chinese mall meant to ring in the Chinese year of the dog.