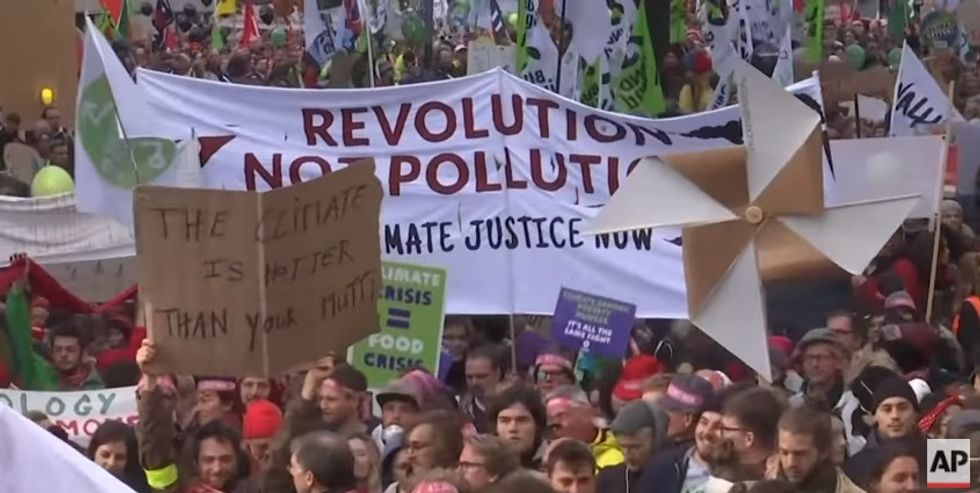 'The climate is hotter than your mutti' is some first class trolling.

The UN is holding its annual climate change summit in Bonn, Germany, this year, and the only event sponsored by the United States of America was a panel discussion on the vital topic of "Clean Coal," held on the sidelines of the actual conference. Yep, the times they have a change-ed. And wouldn't you know it, people in the audience didn't even sit still and wait to hear about the wonders of how coal can make everyone's life better, possibly because the people in the audience weren't all coal company executives, who really eat that stuff up.

Clean coal is bull----,” one person yelled. “Liars, you are a bunch of liars,” another bellowed from the back of the room.

The Guardian reports that roughly 3/4 of the audience of 200 interrupted the panel by bursting into song, or what passes for it, considering what they were parodying:

To the tune of God Bless the USA, the mostly young protesters sang: “So you claim to be an American, but we see right through your greed, it’s killing right across the world, for all that coal money.”

And despite the best efforts of the panelists to explain that coal is clean and wonderful and efficient, it seems virtually none of the international representatives were impressed, probably because they're all biased against having their land flooded or they have an unnatural fondness for the polar ice caps.

Tuaoi Uepa, a delegate from the Marshall Islands, called the event “ridiculous.”

“There's no such thing as clean fossil fuels. … We can't move to the future like that,” Uepa said.

Now just hold on a damn minute -- the Marshall Islands are a US possession, so why was that guy even allowed to go to a UN climate summit? Donald Trump will no doubt try to cancel his visa so he can't come to America anymore.

Still, George David Banks, a White House energy aide, did his very best to insist that clean power can't possibly meet the needs of a modern industrial democracy. That might be a tough sell in Germany, where on one particularly sunny, breezy weekend in April, roughly 85% of the nation's power was generated by solar and wind. That was an unusually clean weekend, but even so, Germany managed to get about 35% of its power generation from renewables in the first half of the year, a new record.

Banks also insisted we must make the planet less capable of sustaining life if you want electricity in the developing world, Just Because:

"This panel is only controversial if we choose to bury our heads in the sand and ignore the realities of the global energy system," he said.

Banks and Barry Worthington, the head of the United States Energy Association, promised that the US would help finance "cleaner-burning coal plants" in the developing world, but were a bit short on details of how brilliantly clean those plants would be. Clean enough to buy lots of American coal for, you bet! And as a matter of fact, the administration has actually proposed cutting in half the funding for the Energy Department office that issues research grants into capturing carbon emissions from coal plants. Maybe the coal industry will decide to research carbon capture itself when it gets a huge tax cut.

Among the panelists was an executive from Peabody Coal, which the Guardian notes has been a very active funder of climate denial groups, because if the government funds real science (or at least used to), it's only fair for industry to balance things out with some pseudoscience.

Rick Perry is a stupid oil-pimping doofus. But today at least, he's only MOSTLY wrong.

And darn it, some of those developing nations just don't seem to understand how much they need dirty energy to be prosperous and happy, like Benson Kibiti, of the Kenya Climate Working Group, who said "More coal will entrench poverty." Guess he needs a lesson from Rick Perry about how only clean coal can stop rape, huh? Kibiti has some really weird ideas about how to bring electricity to the developing world:

More coal is not going to end the problem of people living without electricity. The vast majority -- 84% -- of electricity-poor households globally are in rural areas, so off-grid solutions powered by renewables like solar, wind and small hydro are going to be the cheapest and quickest.

Yeah, but how are you going to cut in Peabody Coal, Exxon, or a corrupt head of state that way, huh?

There's just no pleasing some people, like former New York mayor Michael Bloomberg, who now serves his globalist masters as "UN special envoy for cities and climate change." He said, "Promoting coal at a climate summit is like promoting tobacco at a cancer summit," which we would like on a coffee cup, maybe. Bloomberg also said that if the Trump administration won't lead on climate policy, "it should at least get out of the way.”

Hahaha, silly Deep State globalist! The Trump administration is the only way, and if you and your coalition of cities and businesses who plan to meet the Paris carbon reduction goals don't like it, Donald Trump will personally come put clean coal in your compost bin, or whatever it is you hippies have.