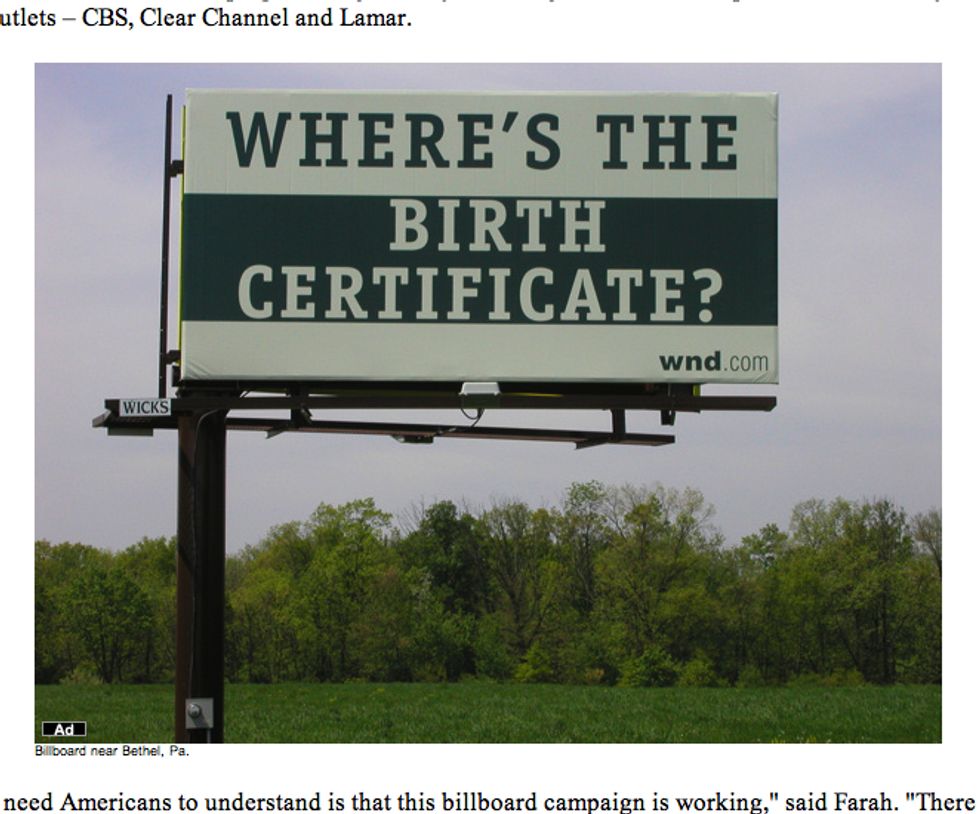 The most important thing you can do for your country at this moment is buy a "WHERE'S THE BIRTH CERTIFICATE?" billboard, but you probably don't know where to start. "How do I make a sign that big?" you're asking yourself, "And how do I get the money? Small businesses are hurting everywhere, including my own meth lab." WorldNetDaily has made it easy for you. WorldNetDaily has always made it easy for you. And they are proud to announcea charitable fund to which you can donate to save this nation from having a black man as its leader. "What I need Americans to understand is that this billboard campaign is working," said head WND intellectual Joseph Farah, according to this press release thing. "There is no shortage of billboards available to us. The only thing there's a shortage of is the money to erect them. We need to raise tens of thousands of dollars a month just to keep them in place."

The newest billboard in an increasingly intense campaign that asks "Where's the birth certificate?" has gone up in Pennsylvania, on Route 61 northbound just before the I-78 intersection at Cabela's in Hamburg.

And if it seems that there are more and more of these appearing, that's no one's imagination.

"If it seems like we are posting more billboards than ever, the perception is correct," said Joseph Farah, editor and chief executive officers of WND, and the mastermind behind the campaign.

Yes, if you and the other five people who live in your Appalachian town have seen more of these billboards around the local meth patch, you're right. And you know what? It's working.

Surveys a little more than a year ago revealed barely half of those in America were aware of the questions over Obama's eligibility. But polls as recent as a few weeks ago now show that 6 in 10 Americans doubt Obama's constitutional eligibility to occupy the Oval Office.

Success! Pretty soon this momentum will culminate in scientists inventing a time machine to transport Obama's mother to Kenya just before she gives birth to him. The system works!

There are many more pictures of these pointless billboards in the middle of nowhere on their site, if you want to cry about how beautiful patriotic action is. [WND]