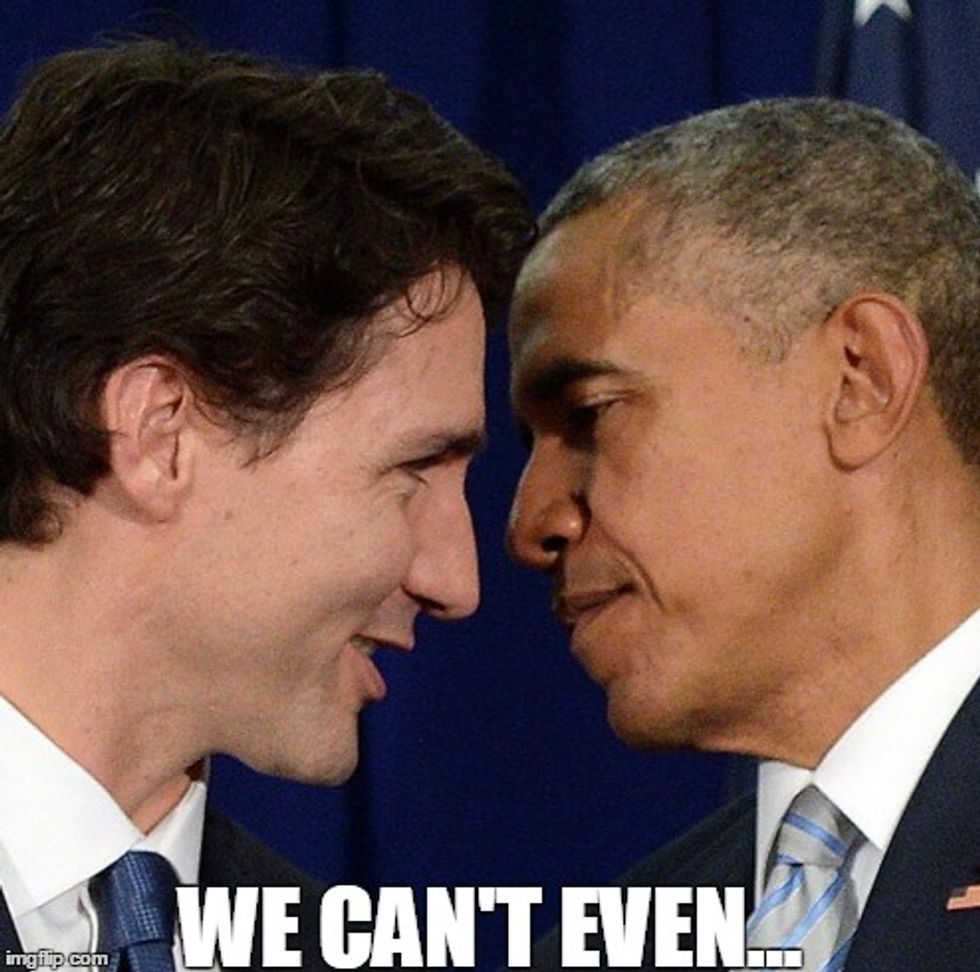 And then they kissed forever.

Oh. My. God. Becky. Did you SEE how sexxxpot Canadian Prime Minister Justin Trudeau is visiting Barry Bamz Also The Sexpot Obama at the White House of U.S. America? Did you immediately faint as you witnessed what Canadian-American relations could really look like? Did you read "relations" just now and have a sex thought? Are you praying to your chosen deity that Barack Obama and Justin Trudeau will build a North American superhighway INTO YOUR PANTS?

Oh beautiful for spacious skies, terre de nos aïeux ... what were we saying?

Anyway, when Trudeau got to the White House, after he and Obama gazed into each other's eyes for an eternity, they addressed the less sexy commoners gathered at their feetses:

As fans excitedly waved both the USA and Canada flags, Obama marveled: 'I've never seen so many Americans excited by a visit from a Canadian Prime Minister'.

Both men smiled as they shared the stage, but the president was quick to throw in some good-natured ribbing - asking Trudeau: 'Where's the Stanley Cup right now? In my hometown'. '

But Trudeau was just as fast, noting that three of the best players on the Chicago Blackhawks , who won the NHL championship last year, were Canadian.

Awww, we love it when they flirt about hockey.

They did talk about serious/boring things like how climate change is real (as if), but Justin likes it when Barry talks smart-like, as you can see from this picture:

At some point during the day, Obama and Trudeau (which, internet fact, some people are calling #TruBama) took a quiet walk together, and Trudeau tweeted coyly about the "special relationship" between the U.S. and Canada. Is THAT what the kids are calling it these days?

Here is a picture of the gay newlyweds of our dreams cooing over the beautiful baby they stole from some bystanders.

And here's a closer-up shot of the same two men and the same adorable baby. Y'all.

Now, to be thorough journalists, we will also point out that Justin Trudeau brought his wife Sophie Grégoire-Trudeau, who is also very sexy, to meet the beautiful American First Lady of Our Hearts Michelle Obama. Here is a picture of them laughing cattily with each other about how the whole Amero-nadian continent may be swooning over their husbands, but guess who gets to do all the sex to them later? THEY DO. "Who rules their worlds?" asked Sophie. "GIRLS! US GIRLS SPECIFICALLY!" replied Michelle.

Then Michelle and Sophie went off and did their own badass things together:

We are sorry to all the other countries in the whole universe right now, as we and our pal Canada are completely bogarting the Hot First Couples. We would share them with you except how we don't want to. They are ours, and you can get your own, you stupidheads.

At the end of the day, the Trudeaus moved into the White House and Obama declared him 'n' Justin sexxxy dictators for life and U.S. America and Canada were like "OK your place or mine?" and they said, "Both, obviously," at which point the entire western hemisphere died of orgasms, the end.