Would Someone Please Tell Donald Trump Why We've Been In Afghanistan For 17 Years? 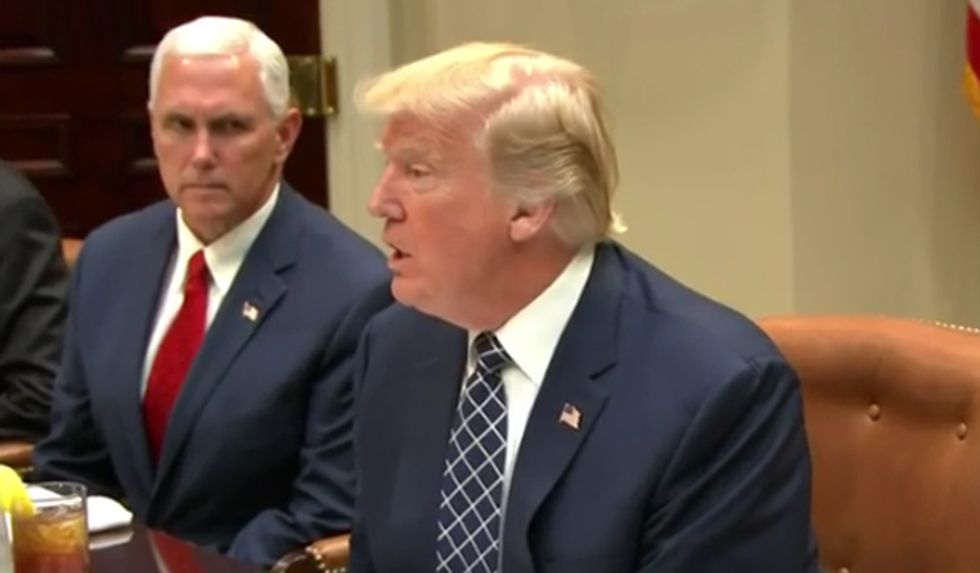 Also, could you maybe park a big Army truck on the White House lawn?

Donald Trump is planning a visit to the Pentagon Thursday, where he'll be briefed on the fight against ISIS, which is still going on even though Donald Trump has said the magic words "radical Islamic terrorism" any number of times. He may also hear from Defense Secretary Jim Mattis on possible new strategy options in Afghanistan, where the U.S. is fighting its longest war in history. Ahead of that meeting, Trump had lunch Tuesday with "four great soldiers who spent a lot of time in Afghanistan" to get their ideas on what ought to be done in that country, and also so they could maybe 'splain a thing or two to him:

JUST IN: Pres. Trump on Afghan War: "I want to find out why we've been there for 17 years." https://t.co/GgPnq7GKlf

We're going to be talking to you about Afghanistan, what you think, your views. These are people on the ground -- know it probably better than anybody."

It would be nice for someone to let the president of the United States know why we've been in Afganistan for 17 years. He's been in office for six months, so it's really high time somebody brought the subject up.

Trump went on to say to the four service members -- Army First Sgt. Michael Wagner, Army Master Sgt. Zachary Bowman, Army Master Sgt. Henry Adames and Air Force Maj. Eric Birch -- that although "I've heard plenty of ideas from a lot of people, but I want to hear it from the people on the ground." And no, Mr. Trump doesn't appear to have any lunches scheduled with diplomats or NGOs who've worked in Afghanistan. Why would he do that?

White House spokesman Sean Spicer told reporters Tuesday that new troop commitments for Afghanistan -- if any -- were not likely to be announced during Thursday's Pentagon visit: “I don’t see any announcements then, no.”

Let's just hand Afghanistan over to Erik Prince. What could go wrong?

Military.com reports that General Mattis is planning to complete a strategy for revamping U.S. military strategy in Afghanistan sometime this month; in a disappointment to wingnuts and probably a big relief for sane people, Mattis is apparently not giving serious consideration to a plan pitched to him last week by Erik Prince, head of private military contractor "Academi" (formerly Blackwater). Prince's cockamamie scheme -- which Steve Bannon arranged to be brought to Mattis -- would have involved turning the American presence in Afghanistan over to an American "Viceroy" (really, his term) who would oversee a private army of mercenaries who wouldn't have to worry about military rotation schedules or command structure, or for that matter, human rights:

The viceroy would also operate under much more relaxed rules of engagement, Prince said. "Troops fighting for their lives should not have to ask a lawyer sitting in air conditioning 500 miles away for permission to drop a bomb," he said.

As the New York Times reported following that pitch,

Mr. Mattis listened politely but declined to include the outside strategies in a review of Afghanistan policy that he is leading along with the national security adviser, Lt. Gen. H. R. McMaster.

Still, it's good to know that if you run a mercenary group and your sister is Secretary of Education, that's enough to win at least the grudging attention of the defense secretary. Last Friday, Mattis acknowledged giving Prince the time of day, but declined to go into any detail on whether he'd been mulling over appointing a viceroy or outsourcing Afghanistan policy to a plucky band of mercenaries:

Soooo... maybe? It would make for a great movie, if nothing else.

Mattis also seems at least somewhat more aware of the history of U.S. involvement in Afghanistan than the president:

"This is hard, and there's a reason we got into some wars in our nation's history and didn't know how to end them," he said. "This is hard work and, if anyone else says otherwise, [he] is either somebody who didn't have to deal with it or deal with the consequences of the decisions of it."

Keep an eye out for President Trump's remarks at the Pentagon tomorrow to include this sage observation: "Nobody knew Afghanistan would be so difficult."