Wyoming Won't Have You Going Around Taking Pictures Of Their Cow Sh*t Infested E. Coli Rivers 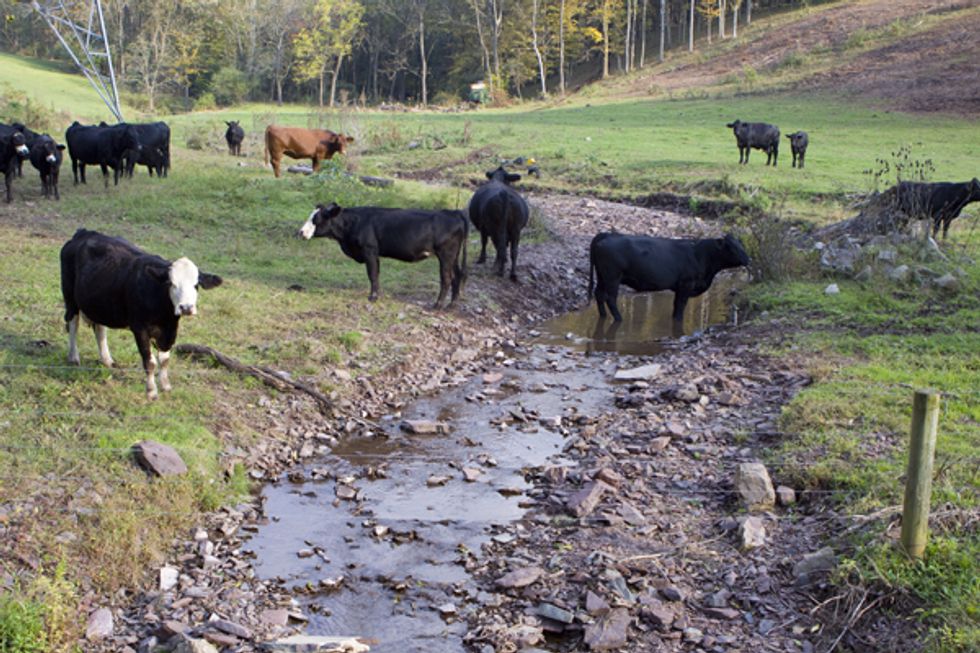 Congratulations, Wyoming! You just passed what may be the dumbest anti-science law of the year, and that's saying something, just considering that Texas and Florida are still states (at least until Texas is neutralized by Jade Helm). Just how odious is Wyoming's new dumb law? Basically, it makes it illegal for any private citizen to collect water samples (or take photographs) on any "open land" for the nefarious purpose of giving data to a state or federal regulatory agency. Excuse us, please, but WUT?

Oh. It's about cow shit. Lots and lots of cow shit that has led to dangerously high levels of e. coli bacteria in Wyoming streams and rivers. Please sciencesplain this to us, Justin Pidot at Slate:

The state wants to conceal the fact that many of its streams are contaminated by E. coli bacteria, strains of which can cause serious health problems, even death. A small organization called Western Watersheds Project (which I represent pro bono in an unrelated lawsuit) has found the bacteria in a number of streams crossing federal land in concentrations that violate water quality standards under the federal Clean Water Act [...]

The source of E. coli is clear. It comes from cows spending too much time in and next to streams. Acknowledging that fact could result in rules requiring ranchers who graze their cows on public lands to better manage their herds. The ranching community in Wyoming wields considerable political power and has no interest in such obligations, so the state is trying to stop the flow of information rather than forthrightly address the problem.

Now, the Federal Clean Water Act actually allows, even encourages citizens to alert state and federal regulators to problems with polluted water -- it's written right into the law. But the recently-passed Senate Bill 12 makes it a crime for people to go and do science all over the open lands of Wyoming without the express "written or verbal permission" of the landowner:

The new law is of breathtaking scope. It makes it a crime to “collect resource data” from any “open land,” meaning any land outside of a city or town, whether it’s federal, state, or privately owned. The statute defines the word collect as any method to “preserve information in any form,” including taking a “photograph” so long as the person gathering that information intends to submit it to a federal or state agency. In other words, if you discover an environmental disaster in Wyoming, even one that poses an imminent threat to public health, you’re obliged, according to this law, to keep it to yourself.

And just what will happen to you if you decide to go play Science Narc against Big Cowshit? First offense is a maximum of one year in jail and/or a fine of up to $1000. Second offenses will net you up to a year in jail and up to a fine of $5,000. And keep in mind, this is not a law against trespassing on private property -- this is a law against dipping a plastic sample cup into a stream on state or federal land, or of taking a photo of cows standing around dispensing cowflop into a waterway, acts which apparently are such a threat to the people of Wyoming that they need to be criminalized.

Even better, if some Science Thug does go out and illegally collect such clandestine data in violation of SB 12, the law also specifies that the data can't be used in a lawsuit against polluters -- but it can be used as evidence against the Science Thug:

Needless to say, the criminally-tainted science facts in the "possession of any government entity" would also have to be "expunged by the entity from all files and data bases, and it shall not be considered in determining any agency action." Now, as we like to repeat, we are Not a Lawyer, but that sounds like a pretty clear demand that no citizen-collected data can ever be used by the government to actually enforce environmental laws, even though the Clean Water Act and other federal laws explicitly invite citizens to bring violations to agencies' attention.

Pidot recommends that the Justice Department sue Wyoming to overturn the law since it violates federal supremacy by "making it impossible for citizens to collect the information necessary to bring an enforcement lawsuit." It probably also violates the First Amendment, since it subjects speech about public resources to "burdensome regulation," and because it interferes with that whole right to "petition the Government for a redress of grievances" thing that half the class forgets on the American Government test. We imagine a lawsuit is the best way to deal with it.

And in the meantime, since the law says that "written or verbal permission" of the land-owner would allow the collection of "specified resource data," maybe the Secretary of the Interior can just post a statement on the department's website containing the lyrics of "This Land Is Your Land" and inviting people to collect as much data as they want to on federal land.