YOU HAVE HURT KELLYANNE CONWAY'S FEELINGS! 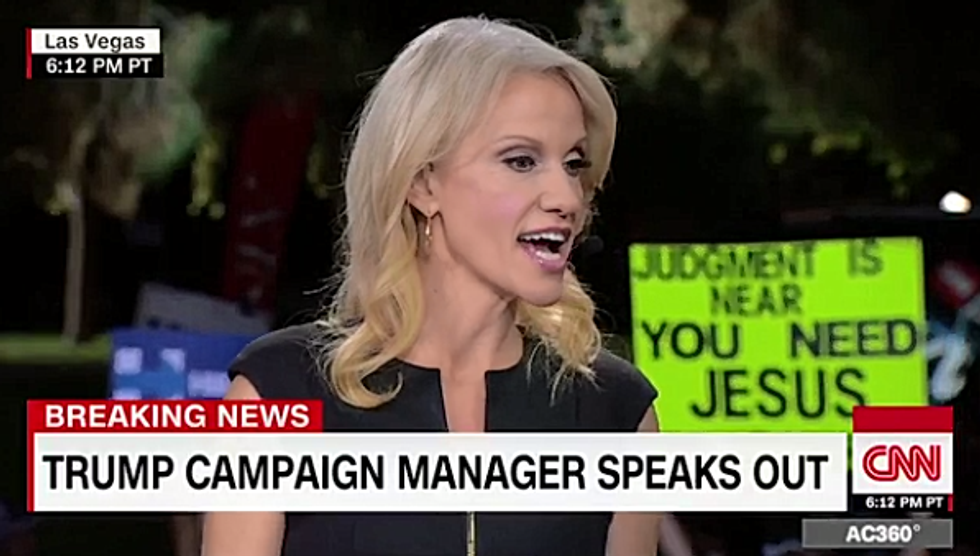 Oh goodness gracious, somebody doesn't like being called on her shit, and that somebody is named Kellyanne Conway. Fresh off essentially telling a female child to fuck off because the kid dared to ask what it's like for a woman to work for a guy who professes his love for non-consensual pussy-grabbing, and also maybe groped a lot of women, Conway went to a forum at Harvard's Kennedy School of Government, a post mortem of the 2016 election featuring the people who ran the various campaigns, and shit got REAL:

“If providing a platform for white supremacists makes me a brilliant tactician, I am proud to have lost,” she said. “I would rather lose than win the way you guys did.”

Kellyanne Conway, Trump’s campaign manager, fumed: “Do you think I ran a campaign where white supremacists had a platform?”

Of course you did, Kellyanne Conway, you racist-enabling asshole. Is this a complicated concept?

“You did, Kellyanne. You did,” interjected Palmieri, who choked up at various points of the session.

UNFAIR! Just because lots of Trump's supporters are deplorable racists, and just because the president-elect has never really condemned them in any forceful way, and just because Kellyanne Conway helped the campaign squeak out a Pyrrhic, popular-vote-losing victory, it is UNKIND AND MEAN to act like she had any role in propping that up!

“Do you think you could have just had a decent message for white, working-class voters?” Conway asked. “How about, it’s Hillary Clinton, she doesn’t connect with people? How about, they have nothing in common with her? How about, she doesn’t have an economic message?”

Joel Benenson, Clinton’s chief strategist, piled on: “There were dog whistles sent out to people. . . . Look at your rallies. He delivered it.”

Yeah, Hillary failed to connect with 80,000 people in the Rust Belt, she beat Trump by two and a half million votes otherwise (so far), oh and also, the Trump campaign was fucking racist. They went after black people (who, in Trump-ese, all live in the "inner city" and have "nothing to lose") and Mexican immigrants and innocent refugee children who would like to come to America instead of getting their heads bombed off, and they used those people as punching bags for the resentments of pig-fucking white racists who are unequipped to live in a 21st century economy.

But just because that's true doesn't mean it doesn't hurt Kellyanne Conway's feelings when you point out that she literally sold her soul to Orange Satan for this campaign, and also she will probably go to hell when she dies:

... Conway accused Clinton’s team of being sore losers. “Guys, I can tell you are angry, but wow,” she said. “Hashtag he’s your president. How’s that? Will you ever accept the election results? Will you tell your protesters that he’s their president, too?”

Elsewhere during the forum, once and future Trump idiot Corey Lewandowski said the biggest problem with the media's coverage of the Trump campaign was that they reported the words he said, verbatim, which is not at all fair and balanced.