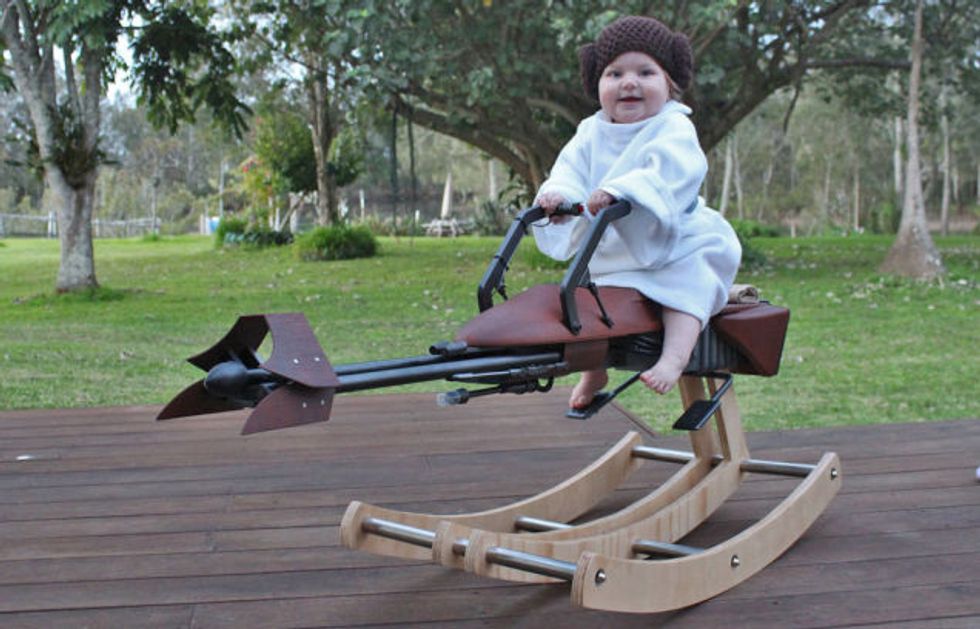 It's your Saturday geek-out, so have another bulb of coffee, or tranya, or Romulan ale -- it's the weekend after all -- and enjoy.

An Australian dad and Instructables addict, ‘Tez Gelmir,’ built this one-off Imperial speeder bike for his itty-bitty Jedi youngling, and makes all the rest of us want one, kid or no.

Toyland has this word of warning for aspiring imitators, however: "This build isn’t for the faint of heart. You’re going to need some serious wood-working, metal-working, manufacturing, and even upholstery skills to get your Speeder Bike rocker looking as amazing as Tez’s does." We figure Shypixel can master most of that in the year or so before Dr. Babby Donna Rose will need one of these things.

Also, best comment pairing: Somebody griped -- even as they acknowledged that it was excessively critical -- that it looked weird to not match the rocking base design to the Star Wars speeder. Happily, someone else had the perfect reply: "Just paint it chroma key green so you can key it out in post."

Buzz Aldrin Has Better Paperwork Than We Ever Will

This one's a couple weeks old, but we had to delay it since last Saturday's nerdout got eaten by Donald Trump. In late July, NASA astronaut Buzz Aldrin won Facebook forever when he posted a copy of a travel voucher that he submitted to the space agency in 1969 to cover the expenses of tooling around Cape Canaveral. Of course, it also included his full itinerary:

NASA reimbursed him $33 for the use of his Personally Owned Vehicle in lieu of a rental car. Also, he posted a photo of a customs form, declaring that he was bringing into the country some "Moon Rock and Moon Dust Samples" and that if there are any other conditions that "may lead to the spread of disease," they are still "TO BE DETERMINED."

The killjoys at the NASA History Office advised us last year that the customs declaration was merely a post-mission souvenir, for larffs:

Did the Apollo 11 crew have to sign Customs declarations upon their return to Earth? Urban legend says yes; NASA and Customs and Border Protection (CBP) historians say no way. In a recent article in the Society for the History of the Federal Government's newsletter, The Federalist, NASA historians Steve Garber and Jennifer Ross-Nazzal and CBP Chief Historian David McKinney explore the myth, its origins, and the reasons why this anecdote persists in the public memory.

The pictured form was not actually signed by the Apollo 11 crew after splashdown. It is most likely that it was created by the Customs Service's District Director for Hawaii, and the astronaut signatures were auto-penned onto it sometime later in the summer of 1969 at NASA Headquarters.

NASA's Tabatha Thompson told HuffPo that while the historians who wrote about the customs form couldn't comment on the travel voucher, it's also entirely possible that Buzz was pulling our leg with that one, too. Still, better to have Buzz Aldrin pulling your leg than punching your face.

Do You Sleep Like Kurt Vonnegut Or Virginia Woolf?

Here's some literary nerding: An infographic comparing famous writers' sleep habits (or at least when they usually got up), literary output, and the cloud of awards and recognition surrounding them. We aren't sure it proves anything -- Kurt Vonnegut, Isaac Asimov, and Flannery O'Connor all got up at 6 AM, and while the two dudes both produced a lot more, O'Connor is the one who's in all the anthologies. Sylvia Plath got up at a ridiculous 4 AM, and look what happened to her. But Charles Bukowski, who slept till noon, produced tons more than Plath did.

How About Generating Electricity With Water Pipes?

This is pretty cool: an energy start-up is installing little tiny turbines in specially-built municipal drinking water pipes to harness some of the energy of the moving water to generate electricity. In Riverside, California, the system will be used to power street lights; in Portland, Oregon, the trial installation is expected to generate enough hydropower for about 150 homes. But since water has to be pumped from place to place, isn't there a perpetual-motion-machine feel to this? In Portland, at least, the system is going into pipes where water pipes flow downhill, so there's gravity to help out. Get all geeky with math in the comments, which we don't allow.

Ned Flanders-Based Band's Music Sucks, Which May Be The Point

If you're going to go to the trouble of starting a heavy metal band where everyone dresses like Ned Flanders, call it "Okilly Dokilly," and compose songs whose lyrics are Flanders lines from The Simpsons, you might want to put in that extra bit of effort and not play music that annoys both metal and Simpsons fans. The band members admit that it's mostly "an over-the-top attempt at getting Matt Groening’s autograph, even if it comes on a cease and desist letter." But the band exists, it is nerdy, and now we are done with them.

Another one we're a little late to, but hey, that's the beauty of a roundup: NASA astronomers are having a load of fun giving the nerdiest possible names to features on the detailed images of Pluto and its moon Charon sent back by the New Horizons probe. Pluto is getting feature names related to exploration and various mythological underworlds -- there's a region named for Chthulhu, a dark spot called the Balrog Macula, and craters and other features named for space probes like Voyager and Sputnik, and for explorers and scientists like Clyde Tombaugh (who first spotted Pluto), Jaques Cousteau, and Edmund Hillary and Tenzing Norgay (plus an international cast of other scientists). And could someone please hand us a Kleenex? Our eyes got a bit misty when we saw a couple of small hills ("colles") named Challenger and Columbia.

Charon is reserved for fictional explorers, their vessels, and their creators, so there are craters named for Vader, Skywalker, Kirk, Spock, Uhura, and so on. The north polar region is called Mordor. There's a Vulcan plain and chasms named TARDIS, Serenity, and Nostromo (No Red Dwarf or Planet Express that we could see, sorry). Go check out the ridiculously-detailed taxonomy of new place-names, all subject to approval by the International Astronomical Union, over at iO9.

The Ponies. You're Looking At the Ponies. Sometimes Dok Goes Too Far. He's the First To Admit It

And finally, this collection of fan-created parodies, in-jokes, and creative time-wasting -- a bit over an HOUR of it -- what premiered at Bronycon a week ago, "Ponies: The Anthology V." Includes bad words that may not be appropriate for members of Hasbro's intended audience for MLP.

Yes, there are four (three, really -- one was an apology for not making one that year) other collections like this. You'll have to find them yourselves. We feel guilty enough already.