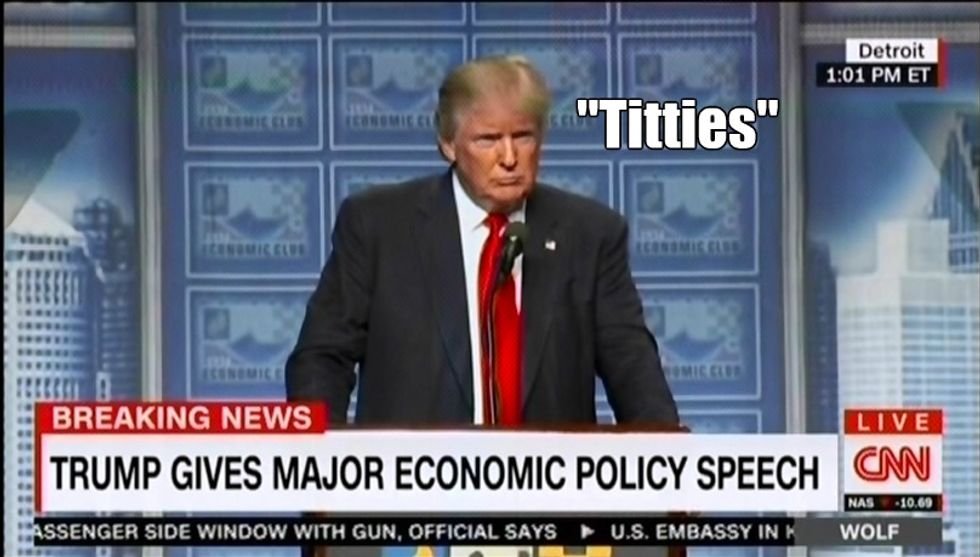 No relation to article, but has "titties" in it.

It has begun to occur to our wise and benevolent overlords that perhaps there is trouble in the economy, contrary to everything His Most Healthy Of Diet has told us! We are surrounded by bubbles, and not the joyous soap kind or the relaxing bath kind or the fun sort that come out of machines over the dance floor! These are the bubbles that we could as easily call "jesus are you people stupid or just really, really high, maybe lay off the coke, banking sorts!"

Now, you may remember Alan Greenspan as the man who, after staking not only his entire professional life but also basically the world economy on a bullshit theory based on his irrational love of Ayn Rand, found "a flaw" in his logic.

For some reason this hasn't stopped people from calling Greenspan an expert, which we guess he sort of is in that he was there for, you know, the whole buildup and execution of the biggest financial crisis since the Depression. He is back talking on the money teevees, doing that expert thing and telling us all something that we could not have figured out on our own!

"The current level of interest rates is abnormally low and there's only one direction in which they can go, and when they start they will be rather rapid," Greenspan said on "Squawk Box."

Remind us again why rates are abnormally low? OH RIGHT it is because you crashed the fucking economy with your schoolboy crush, asshole. We took rates to almost zero back in the good ol' days of '08 and then basically didn't touch them again for damn near a decade and yeah, that'll fuck with an economy too who'da thunk it?

So like we were telling you (Alan Greenspan usually sends us off on a tangent, sorry), there are bubbles. Bitcoin has now beaten good old-fashioned tulip mania, which is definitely a sign that you should buy bitcoin right now when the market can go nowhere but up. Digital currencies generally are kind of in bubble territory, which is great because we're sure that everyone who's diversifying into this new technology can explain cryptokitties.

Also too, the august New York Times has noticed that years of low interest rates have led to the exact same thing that everyone with half a brain predicted, nearly as though we had just lived through the prequel to this movie!

At the same time, housing bubbles are all too evident in countries like Australia, Britain, Canada and China, while interest rates have been driven down to unusually low levels for high-yield debt and emerging-market corporate debt.

Weird, right, that people would buy a lot of things with high returns willy-nilly, we bet they've totally done all the proper risk assessments right, because it's not like we're using the same companies as last time or anything, right, we would not be that fucking stupid!

Only we've brought back housing bubbles.

Oh, and we're in record amounts of debt.

And AIG is the industry leader in cybersecurity risk assessment now.

And we brought back subprime defaults, only this time it's for auto loans.

We cannot for the life of us figure out why anyone would be warning that perhaps there were rough waters ahead!

Economic policymakers seem to have lulled themselves into a false sense of security by trusting the stricter bank regulations put in place after the collapse of Lehman Brothers in 2008.

We think it prudent to note here that the median Congressperson is worth about a million bucks net, so it is entirely possible that nobody is confused at all about how secure things are, it's just that they mostly stand to make an awful lot of money between their own personal fortunes and all that sweet sweet campaign cash.

It is too late for policymakers to do much to prevent bubbles from forming. However, it’s not too early for them to start thinking about how to respond in a manner that might free us from the boom-bust cycles that we seem to be experiencing every 10 years. They could, for example, create a program that in a severe downturn would give every citizen a cash grant to be spent at their discretion, what Milton Friedman called “helicopter money.”

*pinches bridge of nose* Okay, New York Times, we here at Wonkette are all about seizing the means and shit but we feel like maybe you don't know that the boom/bust cycle is kind of one of the basic inescapable facts of a capitalist system. No, really, here, let us show you!

It bears mentioning here too that the Heritage Foundation calls Milton Friedman "the father of economic freedom" so when the economy is to a place where that guy's telling you to give money away you possibly, just maybe, have a few problems.

Fun fact about Australia: They were the only OECD nation to come out ahead after the crash. Know what they credit for that? Wayne Swan, who was in charge of the dollarydoos at the time, looked around at the relatively debt-free economy he had to work with and spent over ten billion on a direct stimulus. (Things were more complex than that, but it sure didn't hurt, just sayin'. Hi Swanny!) Oh, we are about to cut federal spending to give tax cuts to billionaires? Hmmm, that is the opposite!

So, what did we learn from the august New York Times? Well, it turns out that an economy that runs largely on bubbles and low interest rates is prone to things like bubbles popping and market corrections. "Bubbles popping" sounds kind of pleasant if you think of celebration, which many people do! Lots of people are going to make just oodles of money on this inevitable bursting! (Probably Donald Trump, who is always bragging about the killings he makes during a recession.) "Market corrections" sounds nearly reassuring, like you're headed to the right place now.

Both terms should sound more like what they are. It should be "sulfurous eruption" and "the end of the game of hot potato only the people who always lose hardest are grannies and sick kids."

Anyway we are sure that Steve Mnuchin has the country's best interests at heart and is the sort of wise and measured leader our economy needs going into 2018, which promises to be quite a stable year in global finance, what with the Brexit and the bubbles and the Chinese and all those trade deals that we are totally not fucking with!

For the fraction of the cost of an NYT subscription yr Wonkette will point out that sustained record highs in any market will inevitably lead to a crash eventually, because gravity or something, so pay the lady: