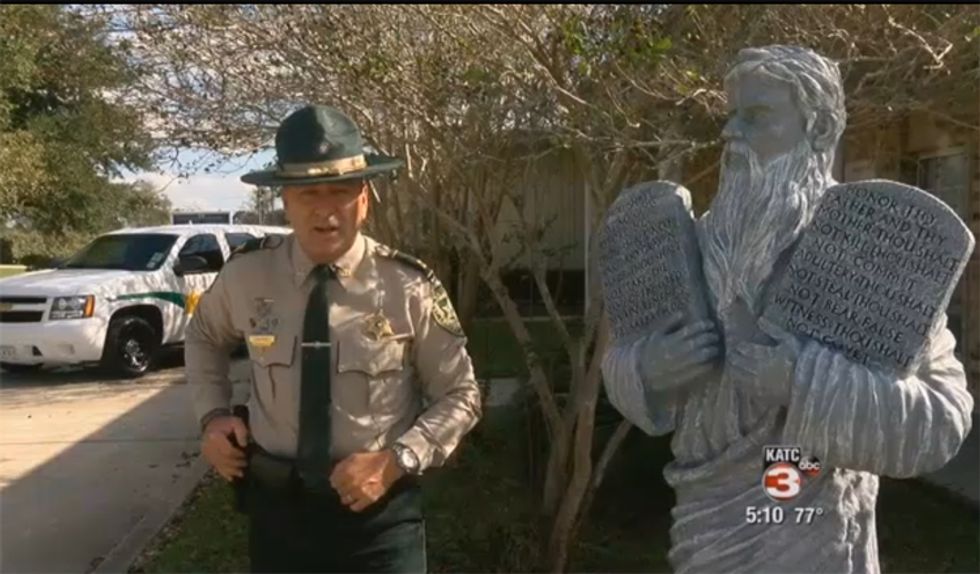 Yr Wonkette has a new boyfriend in law enforcement, and he is Captain Clay Higgins of the St. Landry Parish Sheriff's Office in Opelousas, Louisiana.

You see, he makes these bizarrely earnest Crimestoppers videos that are half sermon, half "Scared Straight" lecture, and half performance art. He is strangely mesmerizing as he looks into the camera and tells malefactors they'd best turn themselves in, because it's the right thing to do and crime does not pay. He's like a Southern-fried version of Dragnet's Joe Friday, with a touch of tough-love compassion: He knows you done wrong, but more to the point, he knows YOU know you done wrong, and you need to get right with The Law before your life of crime leads you past the point of redemption. Maybe it's our Catholic upbringing bobbing to the surface, but Yr Doktor Zoom feels strangely compelled to go and turn himself in to Captain Higgins for something.

Since he started doing the Crimestoppers segments for Lafayette station KATC in early 2015, Clay Higgins has become a minor internet celebrity: He has his own fan page on the Facebooks, was the subject of a glowing profile in the Washington Post, and received a mention on the Tonight Show. He is unpretentious and sincere, maybe even a little cornball, but completely winning.

Consider the video up top, in which he tries to fathom the mind of a person who would break into a church and ransack Jesus's stuff:

Look into your own heart and ponder: What kind of a man would steal from a church? On the night of October 30th, an evil presence entered the Catholic Cursillo Center on Highway 104. The thief smashed through the door, rummaged through every drawer and closet, cleaned out the cash register, and emptied the safe. Imagine the excitement of this demon as he destroyed the property of Christ, and stole the hopes of the poor! His soul no doubt suffers the deepest of dismay, the gnashing of his teeth heard in Heaven itself.

It's like Ed Wood, Jr. made a PSA after binge-watching Fargo. And then the video cuts to Higgins standing in front of the church, demanding Hell itself release the suspect, that he might face justice and possible redemption:

Abaddon! Listen well! Silence your abyss and pay attention to me! I'm talkin' to you, now. You think you've captured this soul, drivin' him to the heights of evil design, stealin' from our church, encompassin' his life with your lies! But we will capture this man, and we will offer him redemption. In our custody, he will hear the Word; inside our jail, he will be free, released from the captivity of the Pit.

That there is some fine preaching, and it's almost enough to make us set aside our qualms about the possible establishment clause implications of a lawman who sees jail as a place for sinners to get all Bibled up. Higgins goes on to let the perp know he left behind a flashlight with his prints are all over it, so it's only a matter of time before The Law catches up with him:

Turn yourself in, son. Your soul is tortured, runnin' from shadow to shadow, sneaking around at night, a slave of the ancient serpent. You're already in prison, a prison of your own design! Turn yourself in, begin to make things right. Let us help you. Redemption can be yours. Your path to freedom begins in our jail.

It's downright Dostoevskian, is what that is. There is something so wonderfully unprepossessing about this guy that even when he goes way over the top, he's still weirdly credible.

Not that every Higgins video is a Russian novel. Sometimes, the captain (recently promoted; in most of his videos he's Lt. Higgins) is simply good and torqued off that some reprobate would burglarize a local grocery and diner where he likes to eat, as in this classic from July:

If you're the man that committed this felony, look at me, son. I'm talkin' to YOU. The Sheriff likes Stelly's Restaurant, and so do I. The food here is good, and the folks are friendly. We're going to identify you, arrest you, and put you in a small cell. After that, I'm gonna have a cheeseburger here, with fries and a Coke, and leave a nice tip for the waitress.

Stepping forward to the camera, Higgins gets serious:

Meanwhile, your next meal will be served through a small hole in a cell door, because our detectives harvested DNA from the rock you used [to break in] and you left a perfect bootprint on the door you kicked in. But we won't need to wait for the lab results, 'cause you're on St. Landry Crimestoppers tonight. Congratulations, son, I'm about to make you famous ... you will be recognized, and the people that know you don't really like you anyway, so when it comes down to a choice between you and a thousand dollars, they'll take the cash.

You do NOT mess with a place where Clay Higgins likes to eat. He takes it personal-like.

Even a petty break-in and theft of some cigarettes is cause for moralizing. In this one from August, Lt. Higgins is quite simply disgusted with the stupidity of the thieves, who managed not only to get caught on video, but one of them also cut his hand, leaving behind a lovely blood sample for easy matching:

Have to say, Higgins is maybe getting a bit too Hollywood in this one, what with his closing warning that once they're caught, the thieves can "think about the Surgeon General's warning that says, 'Cigarette smoking is hazardous to your freedom.'" It's not his best work.

And as the WaPo profile points out, with all the depressing cell-phone video evidence of cops being horrible, it's refreshing to see a cop who comes off as a straight-shooter -- without any shooting at all. Higgins strikes us as a lawman who knows the difference between right and wrong and understands that most criminals are more stupid than evil. And he'd like you to know that if it's all the same to you, it'll be a lot less trouble for all of us if people would just straighten up and fly right. And he's persuasive; at least one fugitive he's profiled turned himself in the day after a Crimestoppers segment aired.

Higgins has acquired the unfortunate nickname "The Cajun John Wayne," but we don't think that's quite right. With his combination of indignation that some people insist on breaking the law in his town and his tough-minded compassion, we think he might be more of a Louisiana version of Terry Pratchett's Ur-Policeman, Sam Vimes.

And we're going to be watching these damned videos all weekend. Let's be glad that there's a Captain Clay Higgins out there, and hope that fame doesn't spoil him.

UPDATE: Yeesh, were we ever wrong! Higgins ran for Congress and proved just how wrong we were, tell you what!