Your 2017 Legislative Shitmuffin Of The Whole Entire Year Is DEVIN NUNES, COME ON DOWN AND SUCK IT! 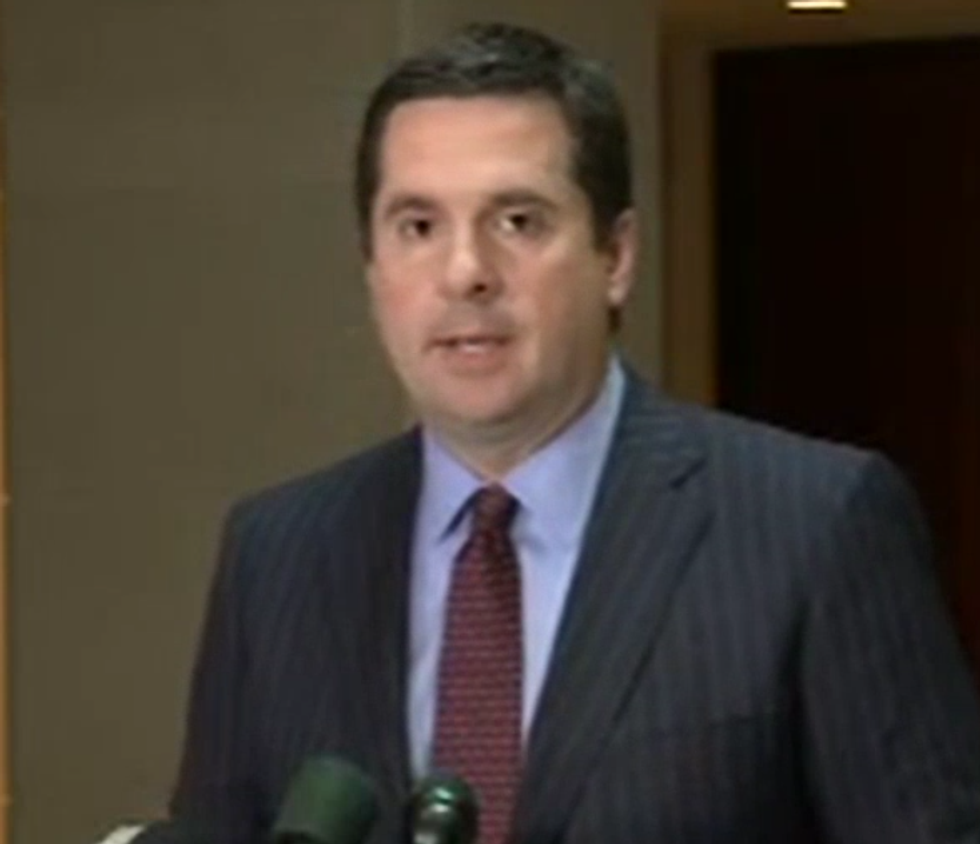 What can be said of California GOP Rep. Devin Nunes that hasn't already been said about anal scabs? You might think Nunes's year of obstruction of justice started in March when he breathlessly kicked his Uber driver in the face (allegedly), rolled out of the car like a ninja, and turned his body into an airplane so he could fly to the White House to get secret information on "Obama people" doing "wire tapps" and "unmasking" to "Trump people," information he tucked up inside his taint for safekeeping so he could travel to the White House to tell the White House the stuff the White House had just shown him. That was Nunes's most egregious act, but it wasn't his first.

The first came a couple days before Devin's Wild Ride, when he shit the bed all over James Comey's testimony to Congress. It was really his moment to say, "Yeah, you guys think Louie Gohmert and Trey Gowdy are stupid? WATCH ME POOP ON MY OWN FACE RIGHT NOW. Then you'll know who to call stupid, LOL TAKE THAT."

And Nunes, who was on the Trump transition team, spent the whole damn year finding new ways to obstruct justice for Trump. After the dog-and-pony show he pulled at the White House, everybody was like "you literally live inside Donald Trump's ass with some Russians," so Nunes said yeah, he does, therefore he will "recuse" himself from the Russia investigation, but the secret surprise was that when he said "recuse," he meant "not recuse." Shortly after that, it was revealed for 100% sure that Nunes's horseshit about "unmasking" was truly just horseshit -- hell even GOP Senator Richard Burr, chair of the Senate Intel Committee said Nunes was full of it -- but Devin Nunes don't give a shit. So he started his own secret parallel investigation, while still holding subpoena power over the House Intel Committee's real Trump-Russia investigation.

While "investigating" the "scandal" Nunes found in his "B-hole," he also seems to have sent staffers to England to try to harass Christopher Steele, because obviously that is a good thing to do with time and taxpayer money. Nunes just wants to prove that the Steele Dossier was a secret Democrat-paid #FakeNews operation to say mean things about his real dad Donald Trump, when in reality it was funded by Democrats as opposition research which is a TOTALLY NORMAL THING FOR A POLITICAL CAMPAIGN TO DO and moreover, IT DOESN'T MATTER WHO FUCKING PAID FOR THE GODDAMNED DOSSIER, ALL THAT MATTERS IS WHETHER IT'S TRUE OR NOT.

(And none of it has been debunked. So!)

Oh, and Nunes has also found some time to investigate the REAL Russia scandal, which is that Hillary Clinton has uranium in her emails or something.

Anyway, Nunes is still at it, obstructing justice for Trump, and he will stay at it until Robert Mueller puts him in jail on the lesser charge of having a really stupid looking face, in exchange for him flipping on Trump. (Or something.) Just before Christmas, he for some reason thought it'd be a swell idea for House Intel Committee staffers to interview Rhona Graff and Felix Sater, two of the most important witnesses in the entire Trump-Russia investigation, behind closed doors in secret in New York when Democratic congressmen on the committee wouldn't be available because of how they were all voting against Trump's tax cuts for Trump at the time. Sounds legit to us.

What's Devin Nunes doing this New Year's Eve? Probably fondling his own butt hair while trying to figure out how to obstruct justice for Trump in the new year. He's a real dick like that.

So that is why Devin Nunes wins the Legislative Shitmuffin trophy! It is not a coveted award, but then again nothing about Devin Nunes is "coveted."

Hey, voters of California's 22nd district! You know what to do on November 6. We are just saying.