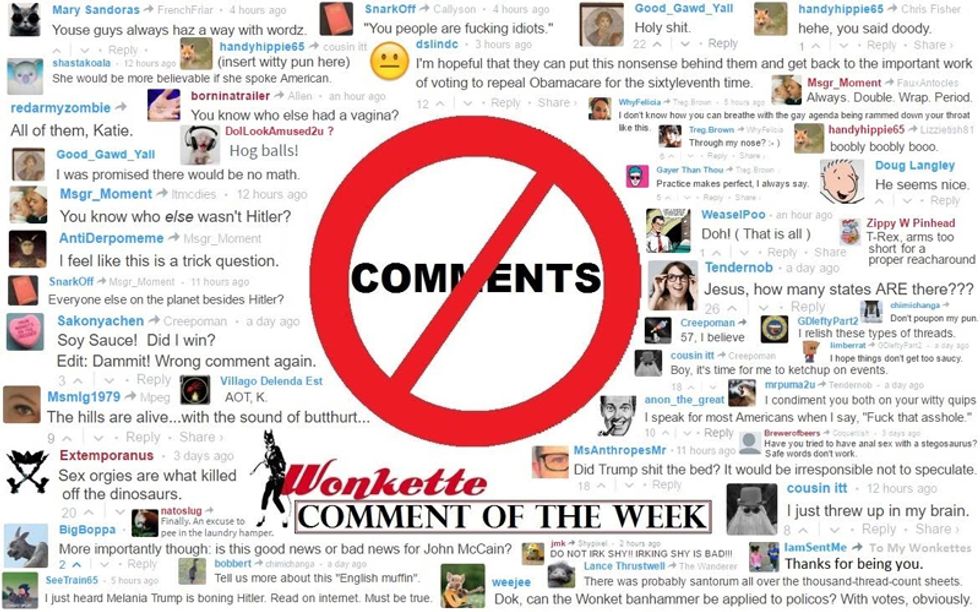 It's five o'clock on a Friday, the regular crowd of commenters shuffle in, and there isn't a Piano Man anywhere to be seen. Guess we'd better throw some Comments of the Week at you!

First, some Honorable Mentions, because narrowing things down is hard (Prize: You were listed here. Try not to get a big head!):

Alert Wonkette Operative "Morrigan In Oregon" got lotsa sentimental upvotes for this very simple pic after Hillary Clinton made some history:

Susan B Anthony's grave with "I voted" stickers on it.

Darn those onion-chopping ninjas who snuck in here.

We got a bunch of deliciously awful comments from Alert Wonkette Operatives on the tale of "Pork Chop," a Florida Gentleman, the guy who tried to bury his boss with a load of dirt from a front-end loader, and whose mug shot is sort of necessary for the comments to work:

Creepoman: Is it possible to stand your ground when you're buried underneath it?

cheetojeebus: While he's in the slammer who's going to take care of his box of strangled kittens?

Second Runner-Up (Prize: A quiet sense of satisfaction at a job well done) goes to Alert Wonkette Operative "Hairstrike Alpha" for another pitch-perfect imitation of Donald Trump, which we found disturbingly accurate, in reply to our story on Deadbeat Donald's passionate defense of asbestos:

Asbestos is the greatest stuff ever known to man. My skin color? Asbestos. Beautiful. They sprayed it on me, not a lot of people know this. Marla Maples. Lit me on fire. Nasty, nasty person. Ugly. Old. They fire proofed me. Believe me. Best stuff ever. You could fire a nuclear bomb next to me and I'd walk away from it. Trust me. Wonderful stuff, wonderful. The mob and Hillary Clinton don't want you using asbestos. But look at me and you can see how good it is. Terrific, terrific stuff.

Our First Runner-Up (Prize: A louder sense of satisfaction at a job well-done, tinged with rage at falling just short of winning) goes out to Alert Wonkette Operative "Nockular Cavity" for this trenchant observation on our story about the nice Georgia Senator who's praying for Barack Obama to die and his daughters to be dead or at least barren, because Book of Psalms:

Man, that Koran is full of some violent, hateful stuff, eh? Wait, what?

And our Comment of the Week (Prize: Whatever Rebecca sends you, and you'll darn well like it!) goes this week to Alert Wonkette Operative "Gayer Than Thou" for this excellent reply to Colorado wingnut Gordon Klingenschmitt and his strange thoughts about marriage equality:

For the last time, homosexual marriage is not based on lust! It is based on being bored on Saturday nights and a desperate fear of dying alone. Like opposite marriage.

Congratulations, "Gayer Than Thou"! Take a bow and get your mailing info to Yr Editrix at Rebecca at-sign wonkette dot com!

The rest of you are pretty wonderful, too. Keep on reaching for the stars! They are many many light years away, and you will fail. Eventually we'll all die and then, much later, the stars will, too. HAVE A GREAT WEEKEND!