Your Dumb Old Appendix Had A Purpose After All, Invasive Species Invade, Cool Comets, And More In This Week's Sci-Blog 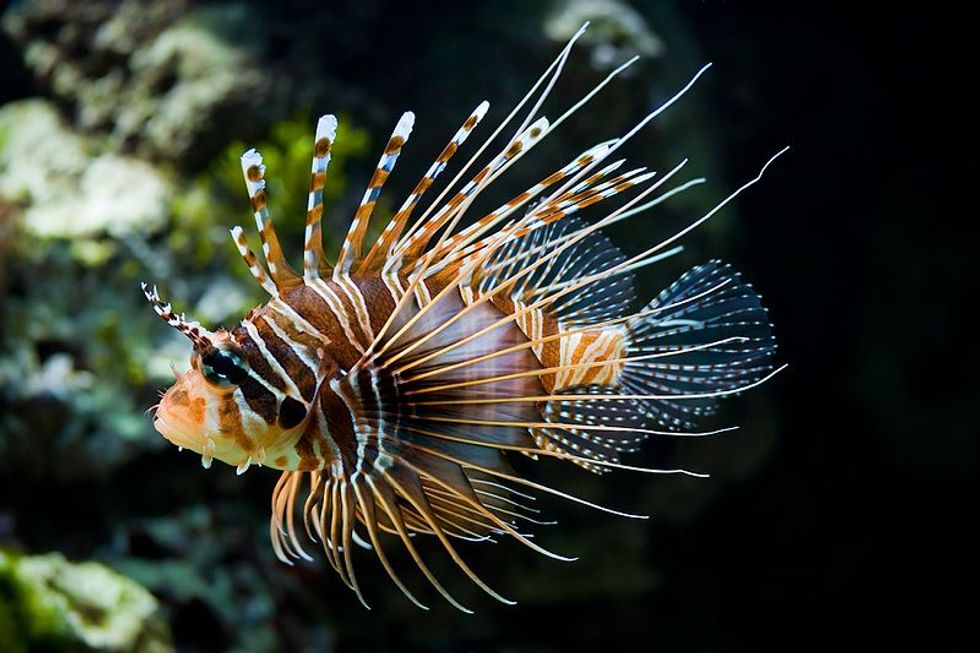 Hoy there, Wonkeratti! It's time once again for another disturbing Wonkette Sci-Blog. Pour yourselves another shot of Old Janx Spirit and come on in!

The state of Florida has had some downright nightmarish problems with exotic introduced species. Ever since humans have colonized that benighted peninsula, they've brought in nonnative plants and animals. Some for food, like the now wide-ranging pest the Feral Pig. Some to "improve" the land, like the Australian Melaleuca tree, planted all over the Everglades to drain it for housing developments and the disgusting  Cane Toad (introduced to eat sugarcane pests, failing miserably at that but now happily eating everything else and poisoning the occasional pet dog). Some because they were considered Pretty. Some completely by accident. All of these introductions had serious unintended consequences, disrupting the existing ecology, and have been difficult if not impossible to control.

One of the more notable sources of exotic problem species has been from the pet industry. There's a whole spectrum of birds, fish and reptiles happily eating or crowding out the native animals in Florida now, after they've either escaped from suppliers, owners get tired of them and put them outside to "Be Free," or both. There's the horrible, voracious Indonesian Walking Catfish, eating its way through aquaculture ponds and simply walking away when aquatic poisons are used. There's around 17 species of introduced South and Central American Ciclids. There's the loud agricultural pest and destroyer of power lines the Monk Parakeet. Various ex-pet Lizards  and the famous, voracious  Burmese Python. That's the Short List. We're not even going to discuss the Wild Monkeys, because they're fucking wild monkeys in Florida and monkeys fill us with Fear & Loathing at the best of times.

All this brings us to the fellow pictured above: the Pterois Lionfish.  The Lionfish (sometimes called the Zebrafish) is a predatory saltwater reef fish, of the Family Scorpaenidae (including scorpionfish and bottom rockfish), whose normal home range habitat is in the Indo-Pacific from the coasts of Japan to Australia. They can grow to over 46 cm. (18"), and are nocturnal ambush predators of smaller reef fish and invertebrates. Lionfish eat voraciously, grow rapidly and can reproduce year-round. Their many spines carry a combined neuromuscular toxin and neurotransmitter, which is very effective in warding off most of their natural predators. The toxin can be rendered inert by cooking, which is a Good Thing (and more on this later). There are two species of Lionfish that are popular in the saltwater fishkeeping hobby: Pterois volitans (the red lionfish) and Pterois miles ( the devil firefish).

As you've probably guessed by now, the Indonesian Lionfish is now an Exotic and Invasive Pest species in Florida waters. The origin stories differ: from larvae and juveniles transported in the ballast water of ships, the accidental release from a seaside aquarium destroyed be Hurricane Andrew (since disproven) -- the first documented capture of a Lionfish in the Atlantic was in 1985 -- and (most likely) deliberate release by home aquarists who simply got tired of them.

Since their introduction into Florida waters, the population of Pterois volitans Lionfish has expanded exponentially and they have expanded their range into the Caribbean and as far north as Massachusetts. For some perspective, here's a handy Chart from the Reef Foundation of the rate and scope of the Lionfish invasion from 1985 to today. Aggressive predators who will eat almost anything that fits into their mouths, they are taking a devastating toll on Coral Reef Ecosystems already under stress from Climate Change, pollution and overfishing. One study in Bermuda established that Lionfish can deplete the local reef fish population by 79% in just 5 weeks. Lionfish have few known predators in their introduced range, probably due to their venomous spines. Introducing new predators to control a pest problem has been done, almost always with spectacularly bad results. Hunting and collection by humans is the only control method left for Lionfish now, but governments simply don't have the resources or manpower to police these huge areas. Ah, but all is not lost: Enter the Sports Divers.

Scuba divers and dive organizations have long been at the forefront of Ocean and Reef Conservation efforts in the Atlantic and Caribbean areas (for instance). They see firsthand and up close the staggering beauty of the Reefs and the toll that has been taken on them. So, they've jumped headlong into the Invasive Lionfish Collection Sport: posting Bounties, organizing Derbies and publishing Cookbooks (they're actually delicious and non-toxic when heated). You knew this column would get around to devouring them sometime, didn't you?

Here is a handy-dandy video guide to proper preparation of your Lionfish dinner:

So, everybody: Save the Oceans - Go Forth and Devour Lionfish. Do it for the Reefs. Hell, we ate the Passenger Pigeon into extinction -- one of the most abundant birds on the North American continent -- we can do this too, don't you think?

A Post Script: Eating the lionfish into extinction will not be that easy, unfortunately. Just last week, NewsDaily published an article with the grim news that Submersibles have spotted large numbers of invasive Lionfish at deep wreck sites -- 80 to 300 meters (250-1000 ft.) deep. This is far beyond the sports divers maximum safe diving depth of 40 meters (150ft) and almost guarantees a natural Lionfish population reservoir in these waters for the foreseeable future.

We can sure put a lid on the population of fish we can reach, though so everyone get eatin'!

Last week, at the National Botanical Garden in Washington D.C., hundreds of people came from all over to see the rare blooming of the wildly suggestive-looking and disgustingly odiferous Titan Arum Sadly, the bloom has gone flaccid now and we'll have to wait an undetermined amount of time -- years, perhaps decades -- for another chance to experience this revolting yet strangely attractive flower. Well, if we need to look at giant disgusting brainless dick-shaped things there's always CSPAN.

Hey, here's some really good news! The Endangered Northern Goshawk has returned to Maryland to breed. Not seen since 2006, when some unnamed asshole shot the last female, it's thought that the male of that pair is back with a new mate. Life goes on. Yay!

Climate Change is turning Lobsters into Cannibals. This is actor212's favorite story. Thanks, actor!

Noah Oppenheim, a marine biology graduate student at the University of Maine, wanted to find out what could be eating young lobsters in the Gulf of Maine. So, he set up a Lobster Cam and found out it was -- Other Lobsters! The disruption of the ecosystem by overfishing of Cod (a major predator), warming waters changing the balance of prey species and a gigantic boom in lobster population has left lobsters with little to eat but other lobsters.

Well...what would you say to the Cannibal Question? Would your answer be perfectly free?

Researchers at the Fraunhofer Institute for Manufacturing Engineering have developed a working prototype of an Octopus's waterjet propulsion system that can be 3-D printed in plastic. They and the good folks at the Octopus Integration Project are working on crafting a fully autonomous prototype robotic Octopus. Hm. it's probably not too soon to say that I, for one, welcome our new Robotic Cephalopod Overlords.

Last Friday, NASA/JPL's Cassini Solstice Mission probe was in the unique position to take an image of the Saturn system with the Earth in the background. I hope you all waved, but I know no one had their pants on. We'll pixilate that part, for the kids.

This week, the Hubble Space Telescope took an awesome photo of the approaching Comet ISON. This comet, on a Sun skimming trajectory through the solar system, is likely to be very spectacular and be as bright as the full moon by November. Can't wait!

The photo to your left, with the meterological buoy floating in a pool of water, was taken right at the North Pole. Yes, now we have lakes at the North Pole. The Secretary of the American Petroleum Institute has disavowed any knowledge of this action.

Last Friday the Toronto Star broke a bit of a bombshell story about an underground oil well blowout in Alberta. Not really news? Well, the really new and unsettling thing about this one is that the blowout was caused by Steam Underground Extraction -- touted as the most "Environmentally Friendly" method -- has been going on uncontrolled since May at four sites and no one seems to understand what's going on or how to stop it. Of course, the Indigenous People are taking the brunt of the impact, as usual. Aside from the Star, some Canadian Bloggers, The Raw Story and Rachael Maddow, I haven't seen much media coverage. Still looking, because this will be going on for quite some time.

Researchers at Duke University Medical Center at North Carolina claim to have discovered the true purpose of the human appendix. Apparently their studies indicate that it acts as an important reservoir for beneficial bacteria and acts to re-colonize the gut populations after severe depopulation by disease or antibiotics. If it's inflamed, it still must come out, though. Happily submitted by our own Mumbletypeg!

Lastly (finally) here is your Preview of the Coming Cephalopocalypse: