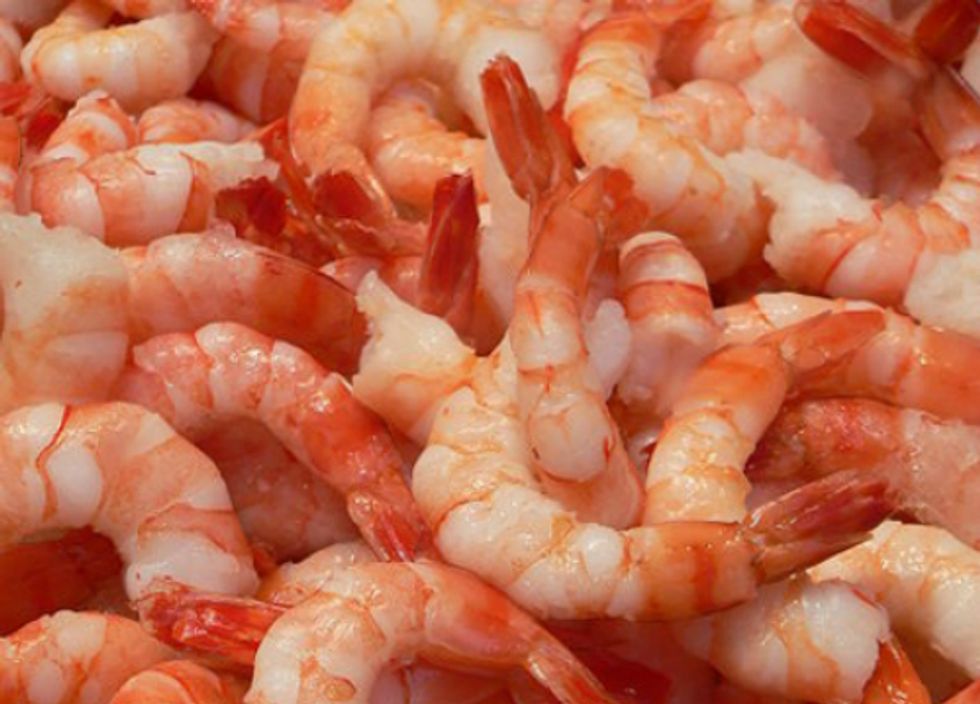 So we've got good news and bad news. The bad news is that a mortifying percentage of the shrimp we eat comes from slave labor. The good news is, jk, there's no good news, humanity is a miserable plague.

According to the Associated Press, the enslavement of vulnerable Burmese refugees -- including children -- in order to fuel Thailand's massive shrimp industry is horrifyingly widespread. This has actually been a story since 2014, when The Guardian published multiple pieces about Asia's seafood slavery problem. AP has also been looking into Thailand's specific problem for quite a while now. The chief difference with AP's most recent piece is that for the first time, they were actually able to track the shrimp shipments from the slave-powered factories to the supply chains of major US retailers and restaurants, giving the lie to the oft-made claim that these companies had nothing to do with suppliers complicit in human trafficking.

Everything about AP's article, one of the more impressive pieces of investigative journalism we've seen in a while, is the worst thing we've ever heard. Yes, worse than Mike Huckabee, somehow; to our knowledge, Mike Huckabee has never forced anyone to do the following:

"We had to get up at 3 in the morning and then start working continuously," said Eae Hpaw, 16, whose arms were a patchwork of scars from infections and allergies caused by the shrimp. "We stopped working around 7 in the evening. We would take a shower and sleep. Then we would start again."

After being roughed up one night by a supervisor, five months into their captivity, Tin Nyo Win and his wife decided they couldn't take the threats anymore.

"They would say, 'There's a gun in the boss's car and we're going to come and shoot you, and no one will know,'" he said.

The next morning, the couple saw an opportunity when the door wasn't being watched.

Less than 24 hours later, Tin Nyo Win's wife was captured at a market by the shed manager. He watched helplessly as she was dragged away by her hair, terrified for her — and the baby they recently learned she was carrying.

Again, this is the Associated Press. The AP isn't generally given to fucking around; if they say they spent days tracking down and exposing the supply chains of companies that heavily source from slave labor, they damn well did that thing. Oh, hey, here's another factoid for your sobbing not-pleasure:

Frightened Burmese workers huddled on the dirty concrete floor, the men and women separated. Some could be heard whispering: "That's 31. He came back." One young mother breast-fed a 5-month-old baby, while 17 children were taken to a corner.

With law enforcement leading the way, it didn't take long to find her, though: Mi San was at a nearby fish factory. After being caught by the shed manager, she was taken to police. But instead of treating her as a trafficking victim, she said they put her back to work. Even as police and her husband escorted her out of the second factory, the Thai owner followed them into the street, complaining that Mi San still owed $22 for the pork and chicken she ate.

Numerous major seafood suppliers were listed as receiving shipments from factories that engaged in extensive slave labor: N&N Foods (a subsidiary of Maruha Nichiro Foods, one of the world's largest seafood suppliers), Okeanos Food (a subsidiary of Thai Union), Kongphop Frozen Foods, The Siam Union Frozen Foods. The shipments were then tracked globally using US customs records, through which AP discovered the following:

the shrimp made its way into the supply chains of major U.S. food stores and retailers such as Wal-Mart, Kroger, Whole Foods, Dollar General and Petco, along with restaurants such as Red Lobster and Olive Garden.

Obviously, we're mad at every company that wittingly or unwittingly allowed this to be a part of its supply chain for any length of time, but wait, why are those last two in particular catching our attention? "Red Lobster and Olive Garden." Hmm. Could it be that until fairly recently, both restaurants were owned by Darden (Olive Garden still is), the restaurant industry's answer to Martin Shkreli? Why, we do believe it could be!

It's funny; we seem to recall someone on another website pointing out something to do with Darden sourcing from a company with slave labor issues in its supply chain, only to be forced to largely retract the story when Darden freaked out about the post and that someone's bosses held up to the pressure like a souffle under a fucking blowtorch. Was that someone ... me? Why, we do believe it was!

Here's the statement Darden issued at the time, one which I was explicitly told to add to the post itself. Emphasis is mine:

Thai Union, one of the world's largest seafood providers, is a long-standing, valued partner who shares our commitment to ethical business conduct and fair labor practices, and we applaud their decision to immediately terminate their relationship with a single supplier identified in the AP story. In fact, Thai Union terminated the relationship with the supplier in November 2014. It should also be noted that the supplier only provided fish for Thai Union's pet food supply chain. As a result, our company had no visibility to this supplier and never received product from Thai Union that was originally sourced by this supplier.

The issue of human and workplace rights is one we take very seriously. In order to successfully combat labor issues in the seafood industry, it is crucial that all stakeholders—including public, private and social sectors—work together as one team. We will continue to do that, and we will continue to work to ensure that our suppliers meet all applicable laws and regulations, as well as our high expectations.

Hey, wait, what was the name of the company whose supply chain AP tracked as sourcing from slave labor? Was it The Insidious Rot That Lives Within Every Human Soul Co.? No, this would be unacceptably vile by even their standards. Was it ComCast? Eh, not a bad guess, but ... wait, no -- wasn't it Thai Union? The very same Thai Union to which Darden has in the past awarded "Distinguished Vendor" status? The same Thai Union they called "a valued partner who shares our commitment to ethical business conduct and fair labor practices" only eight and a half months ago, long after the since-confirmed allegations were out in the open? The same Thai Union that, whether they realized it or not, sourced directly from the factory responsible for the following quote:

The conditions they described inside were horrific: A woman eight months pregnant miscarried on the shed floor and was forced to keep peeling for four days while hemorrhaging. An unconscious toddler was refused medical care after falling about 12 feet onto a concrete floor. Another pregnant woman escaped only to be tracked down, yanked into a car by her hair and handcuffed to a fellow worker at the factory.

"Sometimes when we were working, the tears would run down our cheeks because it was so tiring we couldn't bear it," said the worker who ran away. His name is being withheld due to concerns about his safety.

"We were crying, but we kept peeling shrimp," he said. "We couldn't rest. ... I think people are guilty if they eat the shrimp that we peeled like slaves."

Obviously, when presented with "um, you're propping up slavery," the CEO of Thai Union made many sadface emojis and issued a somber, apologetic statement:

"I am deeply disappointed that despite our best efforts we have discovered this potential instance of illegal labor practice in our supply chain," Thai Union CEO Thiraphong Chansiri wrote. His statement acknowledged "that illicitly sourced product may have fraudulently entered its supply chain" and confirmed a supplier "was doing business with an unregistered pre-processor in violation of our code of conduct."

Awww, poor fella! He had no idea slave-sourced product was in his company's supply chain! How could he have known?! NO ONE at Thai Union could possibly have had any awareness of the connection between --

A factory just a few miles away from Tin Nyo Win's shed provided shrimp to companies including Thai Union; a half-dozen former workers said a Thai Union employee visited the shed every day. A runaway worker alerted a local migrant labor group about slave-like conditions there after being brutally beaten across his ear and throat with iron chains. Police raided the factory in May.

Now, based on Darden's claims that the problems were with "one supplier" in Thai Union's own chain, that their "valued partner" Thai Union had dealt with the supplier promptly upon learning of the connection to human trafficking, and that the issues had only ever extended to pet food (and thus had never been a part of Darden's own supply chain), one of the following three options must logically be true:

1. Darden investigated the potential concerns themselves and decided the problem didn't run any deeper than it appeared. In this version of events -- the most charitable possible explanation for the company -- Darden didn't want to source from slave labor, but was too laughably, tragically incompetent to prevent it from happening.

2. Darden took Thai Union's word for what was going on without investigating further, much like a certain former employer of mine who shall remain nameless took Darden's word for their innocence instead of showing a modicum of fucking backbone. In this version, Darden is either extremely naive, extremely stupid, or both.

3. Darden gave not one tin shit about whether it was sourcing from slave labor. In this version -- which, again, is only theoretical! -- Darden is a collective of Dickens villains.

Obviously, it would be unfair (and possibly actionable) to speculate as to which of these is the truth, so Wonkette won't do so. Besides, we don't need to; not one of these potential chain-of-events makes Darden look good.

Oh, and just in case you wanted to see a little bit more of the worst humankind has to offer, there's this:

Back at the shed where their nightmare began, a worker reached by phone pleaded for help as trucks loaded with slave-peeled shrimp continued to roll out.

Chaiyuth called a meeting to explain human trafficking laws to nearly 60 shed owners, some of whom were confused about raids that swept up illegal migrants. Later, Chaiyuth quoted one shed owner as saying, "I'm not selling drugs, why did they take possession of my things?"

In conclusion, humanity is a blackened pit of despair and horror, burn everything the fuck down. Enjoy your HumpDay tomorrow!