Your Weekly Top Ten Is Crying With Michelle Obama, But In A Good Way (We Guess) 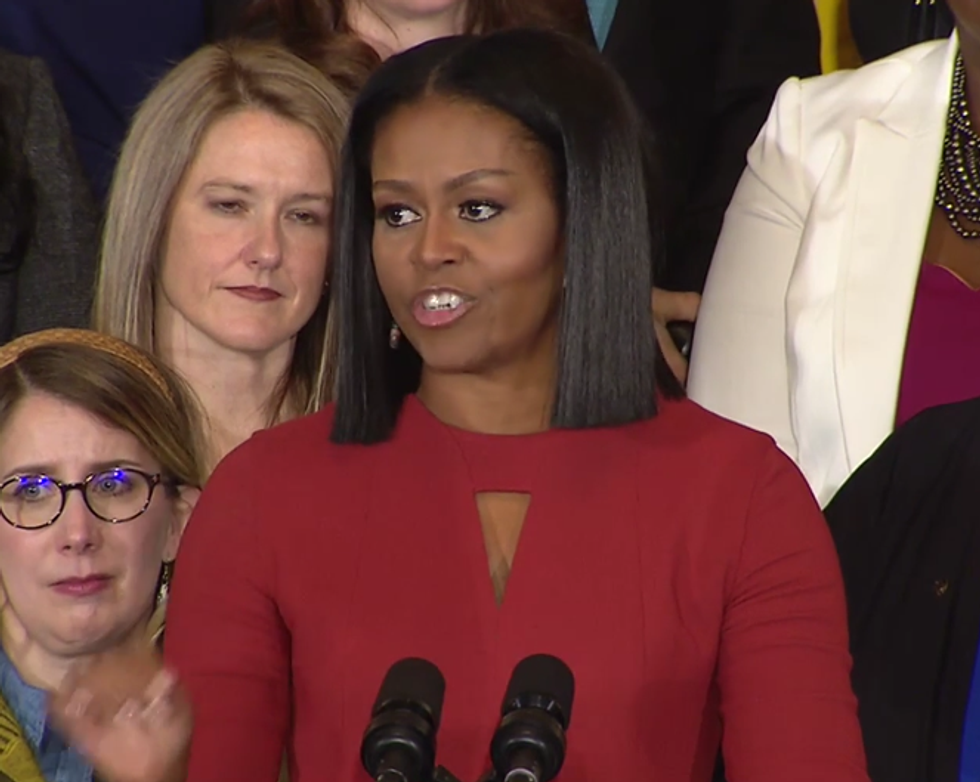 OH HI WONKERS HI! It is time for your first top ten list of the new year, where we count down the top posts of the week for you, because we are nice like that. But first, just watch the video above, of Michelle Obama's last official speech as first lady. She cried, we cried, you will cry, but it will be in a good way, and by "good" we mean bittersweet, because we'll never have another like her, and also because literally in two weeks, our first lady will be Ivanka Trump and sometimes Melania if she's not already filed divorce papers. HAHA YOU ARE CRYING NOW.

We will do the top stories in a minute, but first, HEY DONATION PARAGRAPH HEY, will you donate us moneys? Will you throw $5, $10, or $25 at our faces? Seriously, if you are able, then pull out your wallet and throw money on our face! OW, OW, THAT IS OUR FAVORITE! Anyway, you can also pull out an envelope and stamp and send money to Wonkette, PO Box 8765, Missoula MT 59807. OR you could just do one of our "ad-fewer" subscriptions, where you only see glorious in-house ads, from our actual friends, instead of yucky-nasty ads.

2. Sad! Kellyanne Conway is out there panhandling for her own salary! Weak!

3. Surprise, Edward Snowden didn't leak that stuff because he was a hero, he leaked because he was being a fucking millennial who was mad at his boss, awwwwww.

4. Unceremoniously knocked up Bristol Palin got pissed off about a thing.

5. That lady what went on the racist rant at Michael's in Chicago "broke her silence," about how she is tired of being discriminated against for being white.

6. Why won't the Democrats hate abortion and gays a lot more? This idiot asked. We answered.

7. Donald Trump said he was going to tell us all about the secret 400-pound hacker who hacked the election, in a non-Russian way. Guess Trump was lying about that too.

8. Guess the children of the Trump family aren't even ALLOWED to swing on swingsets, or play tag, or experience joy.

9. Wingnuts cannot believe how California just legalized child prostitution, probably because CALIFORNIA DID NOT DO THAT.

10. And finally, this nice British singer lady says she'll perform at Trump's inauguration, on one hilarious condition. (The CONDITION is hilarious, not the song, for Twitter's information.)

Thank you for following our orders! Now you get Wonkette Toddler Child Baby pictures!