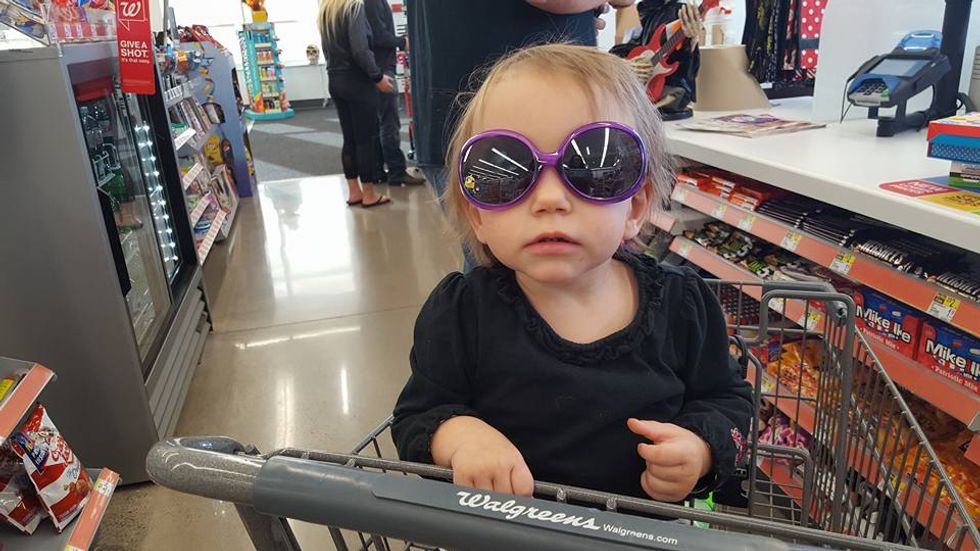 Wonkette toddler, traveling to see you right now, if you're in Portland!

OH HI WONKERS. What a damn week, like for real. The House finally, on its 9,738th try, managed to pass an Obamacare repeal bill (the contents of which none of them know), and it is awful. But at the same time, Hillary Clinton decided to emerge from the woods and big surprise, it made certain white men very GRRRRRRR ANGRY! It's pathological at this point. So, anyway, there are two stories about that in your top ten list, which we will be counting down in just a minute.

First, though, may we please remind you that yr Wonkette is coming to visit you in Portland on Monday night, May 8? The one in Oregon, not the one in Maine. CLICK HERE FOR ALL THE FANCY DETAILS.

Secondly, it is time for US ASKING YOU FOR MONEY, with all the love our hearts can muster! See, we are 100% funded by you readers, and we have no ads, and we love it, and you love it, but we have to keep asking you to give us dollars and subscription moneys and things in order to make this system work. We explained all this in your monthly reminder post about how we need moneys, on a regular basis, to keep this place running without ads. Will you throw $5, $10, or $25 at our faces? Or we even take thousand dollar and million dollar donations, like if you are a secret famous celebrity fan of Wonkette! Seriously, if you are able -- DO NOT MONEY US IF YOU CAN'T AFFORD IT -- then pull out your wallet and sign up to throw money on our face every month! You can also pull out an envelope and stamp and send money to Wonkette, PO Box 8765, Missoula MT 59807. Or do a subscription! Whatever, just please support us any way you can.

Look, it's the traditional Wonkette Baby Donation Pressure Lion Of Cuteness, grabbing for your checkbook:

1. That deadbeat racist former congressman Joe Walsh has always been at war with human decency. A story from last year that's only #1 because Patton Oswalt tweeted it. Love you, Patton Oswalt!

2. Hillary Clinton emerged from the woods and decided to break her foot up Donald Trump's ass. It was great! This story would have been #1 if Patton Oswalt hadn't tweeted that Joe Walsh story. Damn you, Patton Oswalt!

3. Nazis? Sovereign citizens? Furries? ALL THOSE THINGS AT THE SAME TIME? They are in this post, for you to read! This story has been in the top ten for like a year now, or two weeks!

4. This really sweet "alt-right" couple went to a Milo protest to attack "snowflakes," and they shot one!

5. Joe and Mika are just gently asking if mayyyyyybe Donald Trump is fucked up, inside his brain. They're not saying he has dementia, but ...

6. Ugh, Hillary Clinton insists on existing, and that makes certain men mad! What a bitch!

7. Did David Brooks find his personal lord and savior Jesus Christ inside his new wife's vagina? We are just asking!

8. Libertarian jerkwad idiot Megan McArdle spent hours tying herself up in knots over basic history questions about slavery. It was very dumb.

10. And finally, Jimmy Kimmel took the radical position this week of suggesting that babies should not die for lack of healthcare. Wingnuts are monsters, so they were like "Um yes they should."

You are very good. You should beg for more Wonkette toddler pictures in the comments, which are not allowed, but you can't always get what you want, because Rebecca and Shy are traveling, which means your needs come LAST.

For now, you will have to be satisfied with this video right here:

K HAVE A NICE WEEKEND GOODBYE.