Yr Wonkette Does Not Advocate Punching Nazis. Except Maybe Just A Little. 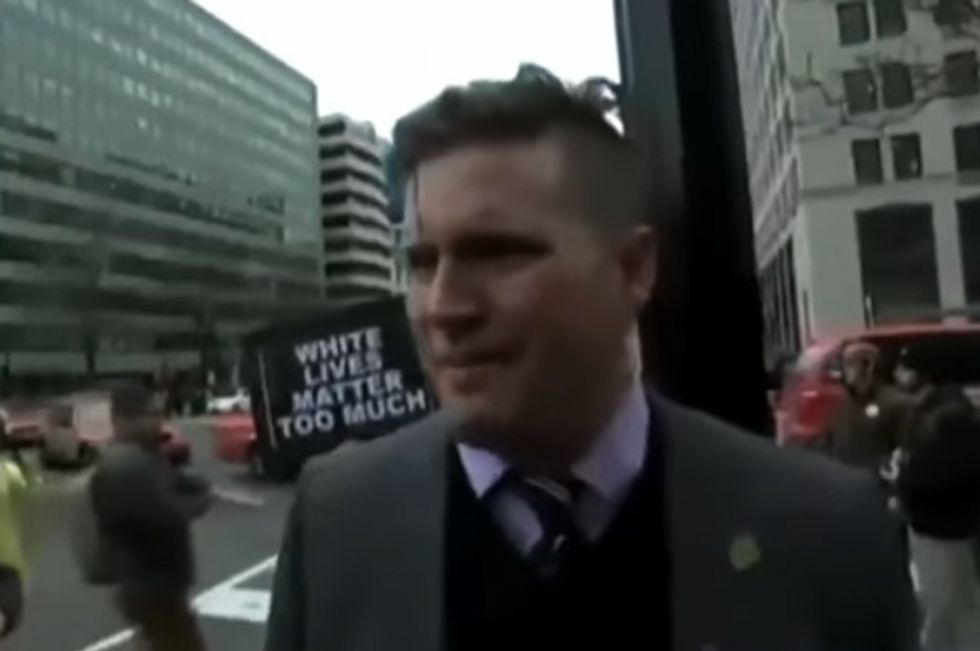 What Would Jello Biafra Do?

As you're probably aware by now, last Friday, after the inauguration of Donald Trump, rightwing jerk Richard Spencer, the "I'm not a Nazi" neo-Nazi who coined the term "alt-right" to make white supremacism seem hip and cool, was punched in the face while being interviewed. This is the guy who led the crowd at an "alt-right" conference in Nazi salutes while shouting "Hail [or Heil] Trump!" He has called for "peaceful ethnic cleansing" of America.

He has since made his own follow-up video -- filmed in what he called “a safe space” -- whining about mean violent leftists dragging the level of our political discourse down. You could probably argue that the discourse was in pretty sad shape by the time open racists became a significant part of the support for the winning presidential candidate. And so now the hot topic online is whether it's ethically OK to punch Nazis in the face.

Yr Wonkette is going to outsource our ethical guidance on that one to Ken White at Popehat, who has worked this out quite satisfactorily:

2. Principles are in a constant struggle with viscera. I want punching Nazis to be acceptable, and find the spectacle of Nazis getting punched to be viscerally satisfying. Jesus Christ and John Donne aside, Nazi suffering does not move me. But I know that sucker-punching someone because their views are evil is wrong.

3. We have social and legal norms, including "don't punch people because their speech is evil, and don't punish them legally." Applying those norms is not a judgment that the speech in question is valuable, or decent, or morally acceptable.

There's more, but that's the gist of it: If we want to live in a society that doesn't allow people to take the law into their own hands, we have to say you're not allowed to punch Nazis, particularly since there's already no shortage of people who would feel similarly justified in punching (or running over) Black Lives Matter demonstrators, or liberals in general, who are of course the real fascists (after all, the Nazis were National Socialists!). That darned old Categorical Imperative is pretty insistent that we can't say punching Nazis is OK.

We can tell you that Yr Wonkette has personally lost sleep over this issue: Sunday night, Kid Zoom was having an extended, impassioned late-night argument over the phone with his best friend (who goes to Reed College in Portland, say no more) about the morality of political violence, and it was loud. Kid was quite adamant that while it may be very, very satisfying to see a Nazi get punched, we can't stay civilized if punching people is broadly accepted. Then once they moved on to talking about video games, I told him to hang the hell up. There are limits to free speech.

As a counterpoint, however, we do at least feel compelled to offer this snippet from Thoughts On The Dead's post, "On The Propriety Of Punching Nazis, An FAQ":

But isn’t this sinking to their level?

That depends. After you punch the Nazi, do you espouse the tenets of National Socialism?

Then you’re better than a Nazi.

So there's philosophy for you.

And while we can't say the punching of Nazis is morally advisable, and believe that of course the person who punched Richard Spencer should be prosecuted for assault (assuming he's eventually identified -- it's the internet, he probably will be), we can't deny there's something deeply satisfying about seeing Richard Spencer get punched in the kisser. As one very wise person said recently, there's nothing wrong with acknowledging the strength of the emotional impulse, then backing away and saying, no, I choose peace and love. Which makes us feel fairly OK about enjoying the many, many remixes of the video, particularly this one, which has a good beat and you can dance to it:

Also, there is this commentary from John Scalzi, blogger extraordinaire and originator of the Mallet of Loving Correction:

Further, also, too, there is this:

Unfortunately, as a general matter, you can also imagine a wingnut saying the same thing about Black Lives Matters activists, and claiming there's simply no reasoning with those people. Not true in the case of BLM, but as a shorthand justification, it'll persuade the wingnut and get good people punched.

There's also this: supermodel Chrissy Teigen in an actual Twitter argument with Richard Spencer over a Nelson Mandela quote:

Stupid Swimsuit Model Does Not Respect The Gun, Should Probably Die

We have to say we're rather delighted Ms. Teigen so regularly proves herself adept at pissing off wingnuts. Is it hypocritical to laugh at a Nazi being punched? Maybe a little, but probably not fatally so. We'll just fall back on Walt Whitman: "Do I contradict myself? Well then I contradict myself."

But if we're not to punch Nazis, what are we to do? Yr Wonkette is awfully fond of another way of getting in Nazis' faces, as practiced by the police department in Richard Spencer's own part-time hometown of Whitefish, Montana: In the face of a planned march by neo-Nazis (eventually delayed when the organizer couldn't afford the permit), a group of rabbis visited the police department and asked Police Chief William Dial if he'd be willing to show solidarity to the local Jewish community by putting a mezuzah on his office door. Not good enough, said Chief Dial:

According to public Facebook post by Scheier, Dial said, “No, I won’t put it on my office door. I want to put it in a more central location, where everyone will see it.”

Scheir and Dial then nailed the mezuzah, purchased in Israel and made of Jerusalem stone, to a door that “every police officer passes upon entering the station,” Scheir’s Facebook post read.

And if you're going to piss off Nazis, you may as well do it with something symbolic and physical -- and something more permanent than a smack in the face. After the SPLC helped to sue the Aryan Nations out of their compound in Northern Idaho, the property was turned into a civil rights museum, and donors in Boise built a memorial to Anne Frank. A techno remix of Richard Spencer getting punched in the face is fine for a laugh, but ephemeral. Really fighting Nazis involves action, and making it clear they're not welcome. Ever.