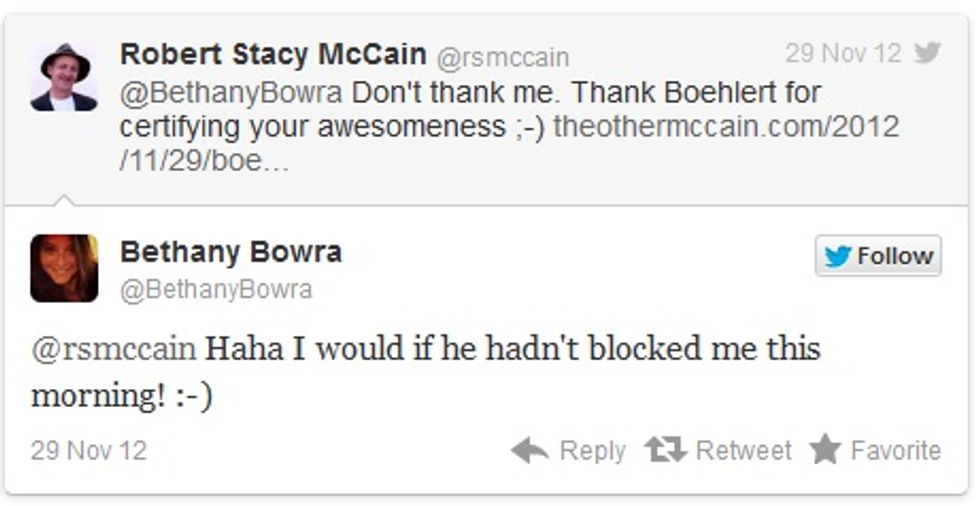 OMG you guys! Wingnut blogger Robert Stacey "The Other McCain" McCain, who we'd never even heard of before we did our very first Wonket six months ago, has a very important article about how a plucky 16-year old girl TOTALLY DESTROYED liberal media figure Eric Boehlert in a Twitter argument about Benghazi. Eventually -- get this -- Boehlert blocked the girl's tweets, which means that she WINS THE INTERNET and no liberal can ever make fun of FoxNews again! Strange, now that we think about it, that OTHER post we did about this McCain guy was also about something that sounded like junior high school gossip.

OK, so here's the skinny, as documented in painfully exhaustive detail on the Wingnutosphere's Newspaper of Record, twitchy.com. First, Boehlert tweeted the completely treasonous opinion that Fox News has been pimping "Benghazigate" well beyond its actual significance, or in Twitchyspeak, "nothing more than part of a grand right-wing nutjob conspiracy" (which, of course, it kind of is, except that "conspiracy" is too grand a term; "strategy to open up a Senate seat by torpedoing Susan Rice" is probably better). In any case, here's the inflamatory series of twats:

Apparently, Boehlert's error was in responding exactly as dismissively to Ms. Bowra's strawman as he would to idiocy written by someone of voting age. He should have checked her profile so that he could have... we don't know what. Ignored it, maybe. It's a no-win situation, really, since any disagreement is, of course, "picking on a kid." So anyway, Bowra fired back:

Hey Eric, #trytokeepup with the fact that your arguments are being demolished by a whip-smart young woman.

You see, we thought that an argument is a connected series of statements intended to establish a proposition, not just the just the automatic gainsaying of any statement the other person makes. But apparently, No it isn't!

So, yes, there actually is an investigation. But that's not the point. What is the point?

We see. Because the discussion up to this point had totally been about MSNBC.

Another guy jumps in to pick on the poor lass, and Ms. Bowra's comeback is clearly why wingnuts describe her as a "very bright young woman":

Boehlert by this point has left the thread, which proves his cowardice. RS McCain writes up his exciting story about how Bowra totally pwned Boehlert, and tweets Bowra to congratulate her. She replies!

It’s hard to imagine how his humiliation could be more complete.

Really. He actually typed that.

Unanswered questions: Is Eric Boehlert going to cry when he finds he has been uninvited from McCain's birthday party? Will Eric Boehlert be excluded from the cool kids' lunch table? And is Mr. McCain aware that, via the immutable law of "I'm rubber, you're glue," he is actually now the completely humiliated one?

In any case, America, meet Conservative America's latest young hero, Bethany Bowra, who proved that, even at the tender age of sixteen, she is able to sling meaningless, fallacious invective and to parrot Fox News every bit as effectively as Yahoo News commenters thrice her age. As McCain notes, she followed up her demolition of Boehlert by "tak[ing] on Sandra Fluke and the baby-hating feminist Left:"

Yes, I said it: Today’s feminists, whether directly or indirectly, are actively advocating the murder of unborn baby girls.

Once again, credit where credit is due: That is every bit as sophisticated an anti-abortion argument as we've seen from people many years her senior.

[The Other McCain / Twitchy]

Check out Wonkette on Facebook and Twitter, and if you feel like picking on someone your own size (though he really intends to get to the gym soon), Doktor Zoom is on Twitter too.